Maria Sakkari advances to the third round of the Australian Open 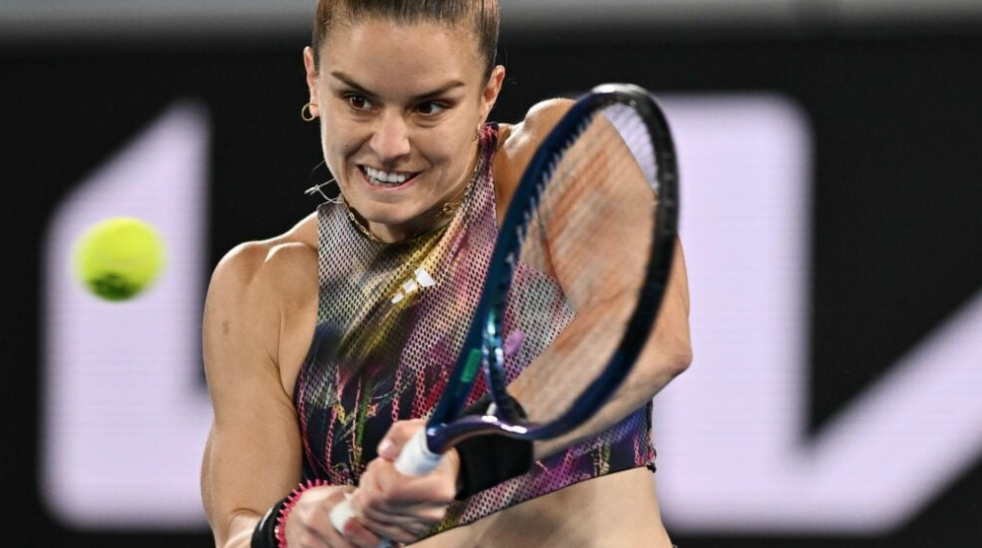 Sakkari had a challenging time advancing, needing more than two and a half hours to see off Russian teenage qualifier Diana Shnaider 3-6 7-5 6-3.

Shnaider is a member of the women’s team at North Carolina State, the same university that produced Michael Jordan, and the 18-year-old at times bossed Sakkari round the court like the basketball legend did to his rivals for so many years.

The sixth seed dropped the opening set and could never really take total control as she steered herself across the dangerous terrain to a hard-fought triumph over the world No 106.

It was a tense battle for Sakkari who only got hold of the two hour and 33-minute contest by significantly increasing her offence in the second and third set.

“It was a very high level from both of us. She played an amazing match. She’s very young, very promising, Maybe she should look at not going to college,” Sakkari said.

“She had me running behind the baseline chasing balls and that’s not usually my game.

“But I tried to find solutions. It’s very difficult to play someone you have never played before, seen before on tour.”

Despina Papamichail on the other hand was not as lucky, losing to Olga Danilovic 3-6, 1-6, 0-2 earlier on Wednesday.

Iga Swiatek has stepped up her game to restore order with a more routine Australian Open second-round win at Melbourne Park.

The world No.1 advanced to the last 32 on Wednesday with a resounding 6-2 6-3 victory over Colombian Camila Osorio and was joined in the third round by Greek sixth seed Maria Sakkari.

Swiatek had to scrap her way back from a service break down in the second set of her less than convincing Open opener against Jule Niemeier on Monday night.

That was the Pole’s first outing since suffering a crushing loss to world No.3 Jessica Pegula at the season-opening United Cup before withdrawing from the Adelaide International 2 with a shoulder issue.

The reigning French and US Open champion was still below her brilliant best for periods against Osorio, dropping serve three times, but at least looks to be slowly warming to the task as the Melbourne Park title favourite.

Swiatek raced to an early 4-0 lead and broke the South American six times in taking the match in one hour, 24 minutes under a closed roof on Rod Laver Arena.

“It was much tougher than this score says. It was really intense physically and Camila was really running to every ball. She didn’t give up,” Swiatek said.

“She didn’t give me many points for free. So I needed to really work for each of them and it was tough, but I’m happy that I was proactive and trying to just play a little bit to put pressure (on her).

“But I’m pretty happy that I won and I can play next round.”

The straight-sets victory set up a third-round meeting on Friday with either Canada’s unseeded former US Open champion Bianca Andreescu or Spanish qualifier Cristina Bucsa.

Other leading seeds scheduled for action on day three include Pegula and fellow US heavyweights Coco Gauff, Madison Keys and 2022 runner-up Danielle Collins.

Thanasi Kokkinakis breezed through his first night of the Australian Open on Tuesday — and the ease with which he did raised eyebrows.

The South Australian was expected on Wednesday to return to Kia Arena to finish the job against Italian Fabio Fognini after rain suspended the match, but the remaining part of the match has not resumed yet.

Fognini didn’t look like he wanted to be playing as Kokkinakis comfortably established a 6-1, 6-2, 4-2 buffer over the former world No.9.

But with more rain in Melbourne again delaying play on the outside courts, some big guns will have to wait before starting their second-round matches while others are still to complete their tournament openers.