If Turkey cooperated the issue of missing persons could be resolved in a few days, Presidential Commissioner says 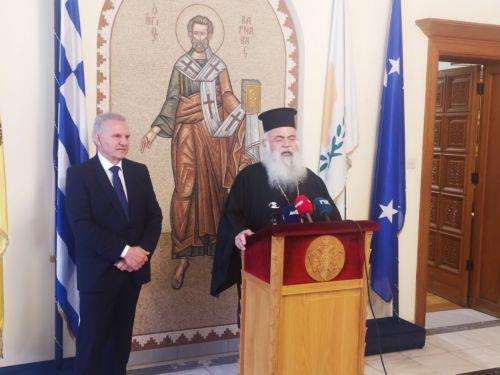 If Turkey cooperated, the issue of the missing persons could be resolved in a few days, said Presidential Commissioner for Humanitarian Affairs and Overseas Cypriots, Photis Photiou, who met on Tuesday morning with Archbishop George III at the Archbishopric Palace, in Nicosia, who said that the matter will be of particular concern for the Church.

Photiou expressed the certainty that the Archbishop will perform the duties of his prestigious position in the best way. He added that he informed him about the issue of the missing, indicating that “the Church and the Archbishop always have a role in this great humanitarian issue.”

The Presidential Commissioner underlined that “the issue of missing persons is the most tragic aspect of the Turkish invasion, because 48 years later we are still talking about 770 missing persons”.

“Unfortunately, parents pass away without receiving answers, without having the opportunity to hold a funeral for their loved ones, and Turkey is responsible for that,” he pointed out. “If Turkey cooperated, the issue of missing persons could be resolved in a few days. All the information is there, in the archives of the Turkish army,” he added.

Photiou said that he also informed the Archbishop about the issues of the enclaved persons in Karpasia and in the Maronite villages in the Turkish occupied part of Cyprus, but also about the restoration of churches in the occupied territories and especially in Karpasia. He also said that he discussed with him the issues of the Diaspora, adding that the Church is always one of the most important factors to keep the Diaspora united.

On his part, Archbishop George III noted that he appreciates the work and the whole attitude of the Presidential Commissioner about the issues he is handling today.

He said that he was informed about the Greek Cypriots of the Diaspora and the enclaved, but also about the issue of the missing persons.

Referring to the latter, the Archbishop emphasised that “it is not enough that we find remains and go to a funeral, but it is also how these people got to this situation”. “Their execution, their arrest and the lost information about them, are matters that the families of these people would also like to know,” he indicated.

“Because we attend the funerals of the remains that are found, we are often shocked by the cry of their children and their wives,” said the Archbishop. “This is a hot humanitarian issue which will certainly be of particular concern to us,” he noted.

Cyprus has been divided since 1974, when Turkish troops invaded and occupied 37% of its territory. Since then, the fate of hundreds of people remains unknown.

A Committee on Missing Persons has been established, upon agreement between the leaders of the two communities, with the scope of exhuming, identifying and returning to their relatives the remains of 492 Turkish Cypriots and 1,510 Greek Cypriots, who went missing during the inter-communal fighting of 1963-1964 and in 1974.