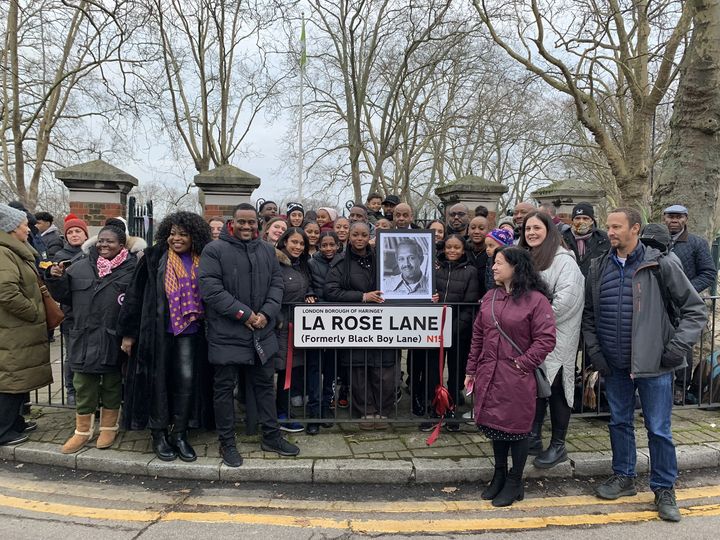 The late Black publisher, poet and essayist John La Rose has been honoured with a new street name in south Tottenham.

Haringey resident John La Rose (1927-2006) was an influential figure in the struggle for social justice and recognition for Black authors, artists and thinkers. He played a key role in founding New Beacon Books in Stroud Green, and later the Caribbean Artists’ Movement.

The decision to rename the street as La Rose Lane was made in response to concerns raised by residents that Black Boy Lane, had racist connotations and was a source of ongoing hurt for Black people. The decision followed a thorough process of consultation with residents.

“I’m delighted that we’re able to pay tribute to John La Rose with a new street name. John made such a huge contribution to Black life both here in Haringey and across the UK and played an important role in gaining recognition for Black authors and artists, as well as championing inclusive education.

“I understand that this is a decision which has generated passionate responses. Several rounds of consultation were held, and I know that the Corporate Committee took the full range of views into consideration when deciding to change the name of the road. It is time now to move forward with this.

“While every effort is being made to ensure the transition is as smooth as possible, we recognise the name change will cause some disruption for residents, so I’m pleased that we’re able to make a £300 voluntary payment to affected households. Our officers will continue to be out and about in the area over the coming weeks providing practical support to residents who need it.

“I also want to be clear that this is just one small part of the work that we must do to ensure Haringey is a place where everyone feels welcome and included. I look forward to working with residents and communities on this important mission in the months and years to come.”

“John’s family are really proud that John’s life and work is to be recognised by having a road named after him. John’s work was of national and international significance but much of it started here in Haringey. We hope that through having his name memorialised in this way we will bring the message of his work – the urgent need for race equality and justice – to a new audience.”

Find out more about the decision to rename the street, the life of John La Rose, and how residents can access support, here.

Cllr Peray Ahmet, Leader of Haringey Council, has given her reaction following the news that one of the new street names on La Rose Lane was vandalised.

“I am sad and disappointed that one of the La Rose Lane Street names has been vandalised within 24 hours of us marking such a historic moment.

“We had a memorable launch yesterday where we celebrated the life and legacy of John La Rose with his friends and family present to remember an iconic figure.

“La Rose Lane makes visible a political history few people will know about because it has been rendered invisible. A history of struggle & resistance which transformed this nation. When people see John’s name they will have the opportunity to discover and learn.

“I fully understand that this is a decision that has generated passionate responses and our Corporate Committee took those full range of views into consideration when deciding to change the name of the road.

“An act of mindless vandalism will simply not be tolerated in Haringey. Now is the time to move forward and come together to honour the legacy of John La Rose and the many other Black residents who have made such a huge contribution in the borough.”