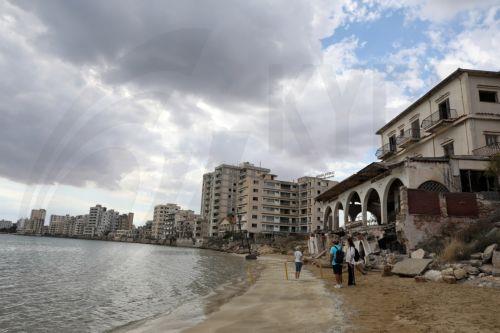 We have left no stone unturned, with a view to avert Turkish objectives, Cyprus Foreign Minister Ioannis Kasoulides said on Thursday in statements to the media after a meeting which the President of the Republic, Nicos Anastasiades, had, at the Presidential Palace, with the UN Assistant Secretary-General for Europe, Central Asia and Americas in the United Nations Department of Political Affairs, Miroslav Jenča.

Kasoulides, who was among the Cypriot officials who participated in the meeting, said that the goal of Jenča’s visit, on behalf of the UN Secretary-General, Antonio Guterres, was to find out which is the current situation as regards the UNSG’s Good Offices Mission for a Cyprus settlement.

Responding to questions, he noted that during the meeting President Anastasiades elaborated among others on the Turkish provocations in the buffer zone. Moreover, Kasoulides said he was concerned by the possibility to have some negative developments until the presidential elections, expressing hope that messages highlighting the need for the situation not to worsen until the elections will be heeded.

Kasoulides noted the various and continuing provocations in Cyprus by the Turkish side, in relation to the buffer zone or the pursuit of recognition for the illegal pseudostate by the Turkic States Organization or elsewhere, and the demand for a separate “Status of Forces Agreement” between the UN and the pseudostate.

“They will achieve none of these and they have not achieved all these despite the Turkish propaganda,” he added.

Asked about Nicosia’s reaction to avert Turkish objectives, Kasoulides said that “we have left no stone unturned” about all these issues aiming at the upgrading of the pseudostate, set up in Cyprus’ Turkish-occupied northern part.

He added that he has had various telephone conversations, there were interventions by EU countries and at the Ministers level and at the level of the External Action Service, while the US and China have also made some movements.

Kasoulides noted the possibility of not seeing any developments before the presidential elections as things stand right now, expressing hope and the wish that messages for the need of the situation not to worsen until the elections will be heeded.

Asked if he is worried about any negative developments until the elections he replied “of course”, recalling that he spoke in public about the dangers for Famagusta and for the dangers related to the Turkish illegal drilling operations in Cyprus’ EEZ.

“I did not do so to raise fear among Cypriots. I did so because we needed to act proactively,” he added.