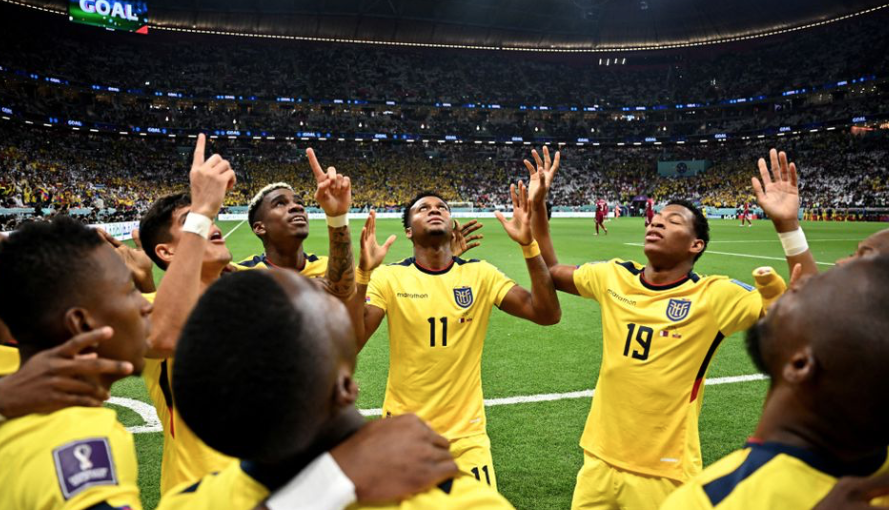 Ecuador eased past World Cup debutants Qatar 2-0 on Sunday with first-half goals from veteran striker Enner Valencia in a one-sided affair that was the first opening game defeat for a host nation in the tournament’s history.

Ecuador’s all-time top scorer, nicknamed “Superman” at home, scored an early penalty and added a well-taken 31st-minute header to give the South Americans a commanding first-half lead as the home side froze with the enormity of the occasion.

Advertisement · Scroll to continue
“Maybe the responsibility and the nerves got the better of us,” Qatar’s Spanish coach Felix Sanchez said.

It could have been even worse for the Qataris in front of a 67,372 crowd at the tent-shaped Al Bayt stadium where they were kicking off the Middle East’s first World Cup.

Valencia had a third minute header disallowed for a marginal offside after shaky goalkeeper Saad Alsheeb flapped at the ball.

“I thought it was a goal. I think Michael Estrada needs to do something about his toe nails because it was very tight,” quipped Ecuador’s manager Gustavo Alfaro of his player whose foot was judged offside.

Ecuador kept pressing though and Valencia coolly dispatched a penalty in the 16th minute after Alsheeb had tripped him.

For his second, Valencia was unmarked but still showed great technique to stoop and take Angelo Preciado’s cross almost from behind him to head past Alsheeb again.

“I dreamt so many times about winning this opening match. This was a dream that I managed to score and help my team get the three points,” Valencia said.

“We managed to score a couple of quick goals which helped us to get control of the game … We think we can go very far and perform well.”

The 33-year-old scored all of Ecuador’s three goals at their last World Cup appearance in 2014 and Sunday’s double cemented his status as a national hero.

“He’s Ecuador’s best ever,” said fan Diego Males, 30, watching on a giant screen at a mall in the city of Ibarra in north Ecuador. “Enner and the team are giving us pure joy.”

TOOTHLESS QATAR
Ecuador’s second goal killed the Group A game as a contest and the second half was played at a slow pace, with many Qataris leaving before the end as Ecuador’s fans chanted “Ole!”

Qatar looked largely toothless despite an enviously long time to bond and train together, including summer camps in Europe. Almoez Ali had their best chance at the end of the first half, heading wide but then judged offside.

Mohammed Muntari also fired over in the dying minutes.

Qatar coach Sanchez looked increasingly disconsolate watching his nervous-looking players misplace passes and allow Ecuador to outmuscle them easily from front to back.

“There is no excuse, I want to congratulate our opponents Ecuador. There is a lot of room for improvement,” he said. “We just have to let go, forget about it and be more competitive.”

Both sides now have to play African champions Senegal and three-times World Cup finalists the Netherlands, with Qatar’s chances of qualifying from the group stage or even picking up points looking slim on Sunday’s performance.

At their fourth World Cup, Ecuador are dreaming of surpassing their best ever previous showing at the finals when they reached the last 16 in 2006.

Their coach Alfaro will be happy that his players put aside the furore over defender Byron Castillo, left at home to avoid further controversy after they faced possible expulsion in a complaint by Chile over his nationality status.

“It was a great victory, especially as it was the opening World Cup match, so there’s more pressure and tension,” he said.

“You don’t know how your team is going to perform. We are the youngest team in this World Cup. If we want to move to the knockout stage, then we had to win this match.”