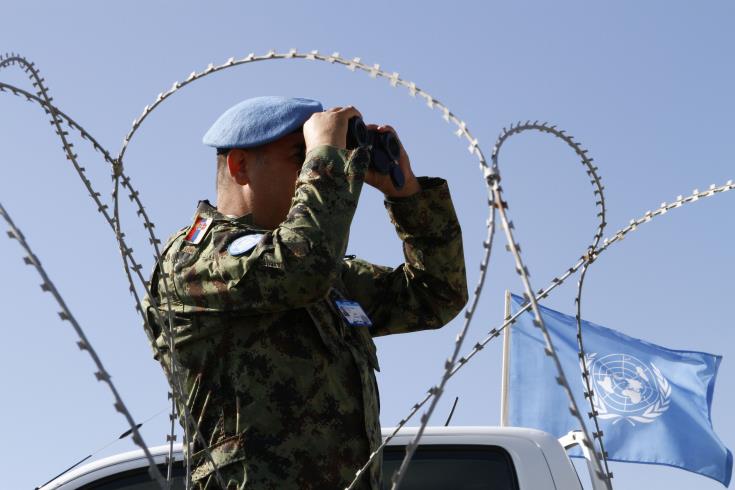 A request by the illegal regime in Cyprus’ Turkish-occupied areas, to conclude with the United Nations a “status of the forces agreement” (SOFA) to regulate the operation of the peacekeeping force in the northern part of the island has been rejected by the UN Secretariat, Ambassador of China to Cyprus, Liu Yantao, said on Friday. He also noted that according to the information available to Beijing, “no country or region” has been admitted to the Organization of Turkic States, either as an observer or a member, during a recent summit in Samarkand.

Addressing a press conference through an interpreter, at the Embassy of China, in Nicosia, the Ambassador, said that China, which coordinates with the UN Secretariat, learns that “the Secretariat rejected the so-called SOFA agreement” concerning UNFICYP.

In a written statement to CNA, the Embassy of China also notes that “we have not received information by the UN Secretariat that it intends to sign a status of the forces agreement with the area of ‘North Cyprus’. There are clear UN rules already in place concerning the signing of such agreements on the status of the forces with the host countries. The Chinese side supports that whether a relevant agreement will be signed depends on existing UN rules and at the same time the position and will of the government of Cyprus must be respected.”

“No agreement” in Samarkand

Ambassador Liu also said that the Chinese side was informed about the announcement by the Turkish President, on November 10, concerning the acceptance of the secessionist, illegal entity in the Turkish-occupied part of Cyprus, as an observer in the Organisation of Turkic States (OTS) on November 10, during a summit in Samarkand, Uzbekistan.

He said moreover that China requested information from Uzbekistan, while the Ambassador also pointed to an announcement by the Uzbek Foreign Minister. On the basis of this information “there has been no change in the organisation’s charter” at Samarkand, nor was a “country or region” admitted to the organisation, either as an observer or a member, Liu said.

As far as we know, OTS member states agree that sovereign countries can become members “therefore they did not agree that the area of northern Cyprus could join the organisation” the Ambassador went on, referring to the Turkish-occupied area of Cyprus.

He expressed moreover respect towards the “spirit of the UN Charter” adding that the position of the Chinese government over the Cyprus issue remains unchanged.

In a written statement, the Embassy notes, moreover, that some OTS members have expressed their support to international law and respect towards the sovereignty, independence and territorial integrity of all countries.

China, the announcement adds, follows closely developments in relation to the Cyprus issue and maintains from the beginning an objective and fair stance, supporting all efforts by Cyprus to maintain its sovereignty and territorial integrity.

“As a UN Security Council permanent member China has played and will to continue to play a constructive role to facilitate a comprehensive, just and lasting settlement of the Cyprus issue within the framework of UN resolutions and in line with a bizonal bicommunal federal solution” the announcement concludes.