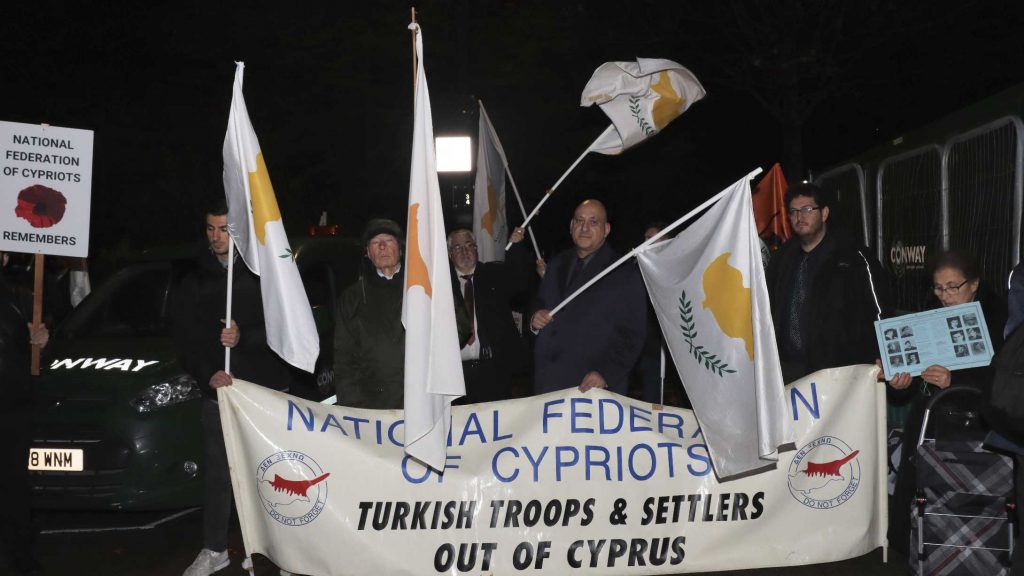 39 years since the illegal “Unilateral Declaration of Independence,” over 200 people protested outside the Turkish Embassy in London to demand its reversal and call for a free and united Cyprus without occupation troops.
UK Cypriots and Cypriot students from across the UK joined the protest, along with representatives of the Armenian and Egyptian diasporas in the UK who joined to demonstrate their solidarity with Cyprus against Turkish aggression.
At the time of the illegal “UDI” in 1983, the United Nations condemned the action, declared it “legally invalid” and called for it to be “withdrawn” through UN Security Council resolutions 541 (1983) and 550 (1984). Then Prime Minister, Margaret Thatcher, urged the President of Turkey to do the “utmost to secure the reversal of this action by the Turkish Cypriots and, meanwhile, not support the declaration which they have already made,” as “it is clearly incompatible with the with the 1960 Treaty of Guarantee.”

On behalf of the community, the President of the National Federation of Cypriots in the UK, Christos Karaolis; Vice-President of the Federation & President of POMAK, Andreas Papaevripides; President of NEPOMAK Global, Christos Tuton; President of NEPOMAK UK, Adrian Patsalos and President of EFEK UK, Marios Constantinou, delivered a letter to the Ambassador of Turkey to the UK during the demonstration. Also present at the demonstration were Federation Vice Presidents, Michalis Ellinas and Bambos Charalambous, as well as the Federation’s Executive Secretary, Andreas Karaolis, and Assistant Executive Secretary, George Alexandrou. The Federation’s letter states, “At a time when Russia’s attempts to illegally occupy and annex the territory of Ukraine have been met by unanimous international condemnation, Turkey must realise that unilateralism has no place in contemporary international relations.” The letter went on to say “we call upon you, as the Ambassador of Turkey to the United Kingdom, to listen to the pleas of the Cypriot people, the international community and your host country, to support a reunited Cyprus based on the internationally accepted model of a bi-zonal, bi-communal federation with political equality, as described in UN resolutions, with a single sovereignty, single international personality and single citizenship.”
The Federation’s President also sent a letter to the new Prime Minister, Rishi Sunak MP. As well as congratulating him on his recent appointment, the Federation’s President urged the Prime Minister to act for Cyprus on this dark anniversary. Mr Karaolis noted the commitments that the Prime Minister has made in his leadership campaign, not least his “support for a negotiated settlement, reflecting UN resolutions and leading to a bizonal, bicommunal federal state with single citizenship and international legal personality” and his call for the “illegal occupation regime to refrain from provocative actions.” He went on to say that these commitments were “well-timed,” especially as we mourn the dark anniversary of the illegal “UDI”. Mr Karaolis continued by urging the Prime Minister to ensure consistency in foreign policy saying: “just as the UK has led the international response against Russia and rejected its expansionism, I urge you and the Government to hold Turkey to the same standards.”