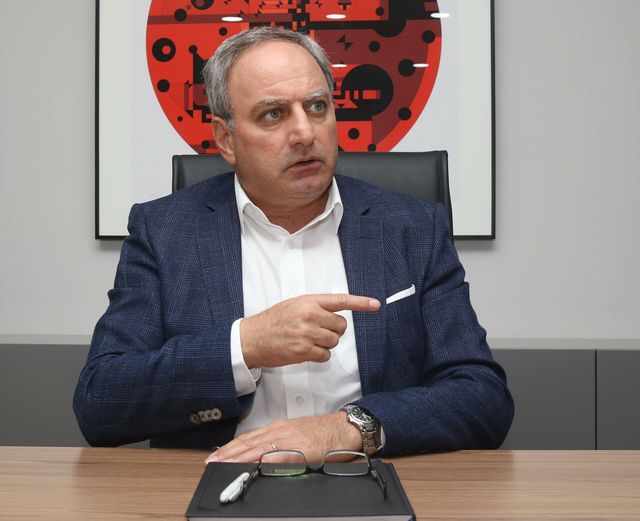 Statements by the General Secretary of AKEL S.Stefanou:
The Elias Stefanou Report conclusion “exposes the government”
Stefanos Stefanou throws down the gauntlet to the President of the Republic
17 November 2022
“Yes, there is evidence included in the finding [in the Report] that the Attorney General’s Office has shut firmly in its drawers. A finding that points the finger at the government and is so revealing. We requested the finding through the parliamentary process, but this government prefers to let the matter fade away in silence.”
This was stated today by the General Secretary of AKEL Stefanos Stefanou during RIK’s programme in response to DISY’s challenge for evidence to be submitted, if available, showing the involvement of DISY and the government in the issue of wiretapping/surveillance.
Accusing the Anastasiades-DISY government of having a moral deficit, Stefanos Stefanou also responded to the President’s claims that not a single citizen was monitored.
The General Secretary of AKEL wondered why there was not even a single libel action filed against M. Droushiotis for what he has written in his books about the government ruling forces and recalled that the President took the same stand when Cyprus was accused by the European Commission for the ‘golden’ passports scheme.
Back then Anastasiades rejected the Commission’s accusations and claimed that this was done in a targeted manner and for competitive reasons.
And he wondered: “Do you think the PM was telling the truth about what subsequently followed?”
He also pointed out that the President continues to deny the conflict of interest he had in granting the passports even though he admitted that his family’s law firm, as well as other law firms of Ministerial Cabinet members, were sending applications for passports to the Cabinet and they were approved.
DISY and the government prefer to refer to the Christofias government rather than their own government because during their 10-year rule “as Cyprus we have reached unprecedented levels of corruption and entanglement/interwoven interests, as well as social inequalities, because they bankrupted the Cyprus Cooperative Bank, for the wiretapping/surveillance scandal and the huge moral deficit that this government has and for the fact that for the last few years Cyprus has been disgraced internationally,” Stefanos Stefanou noted.
At the same time the General Secretary of AKEL underlined the moral deficits of this government that while all this is happening and while in other countries resignations are happening, the government is proud of its work.
AKEL’s proposals are targeted and costed
Responding to the government’s accusations of rampant benefit policies and populism, the General Secretary of AKEL noted that AKEL’s proposals to provide support to society and the economy from the unbearable cost of energy were submitted in a very targeted and even costed way.
St. Stefanou also referred to AKEL’s draft bills in Parliament that strengthen the state’s revenues and concern the taxation of super-profits, while he accused the government of lacking the political will to proceed in this direction.
AKEL will not get involved in the archbishop elections
Asked about the archbishop elections, the General Secretary of AKEL stressed that: “AKEL will not get involved in the archbishop elections because it is our conviction that there must be a complete separation of church and state. However, this does not mean that citizens should not be interested in the archbishop elections.
Since it is provided for in the Church’s charter, citizens can vote. We would like to have a Church that fulfills its spiritual and charitable work, sends out messages of love and solidarity to our suffering fellow citizens and certainly does not scandalize its followers.”