The 49th anniversary of the Polytechnic uprising 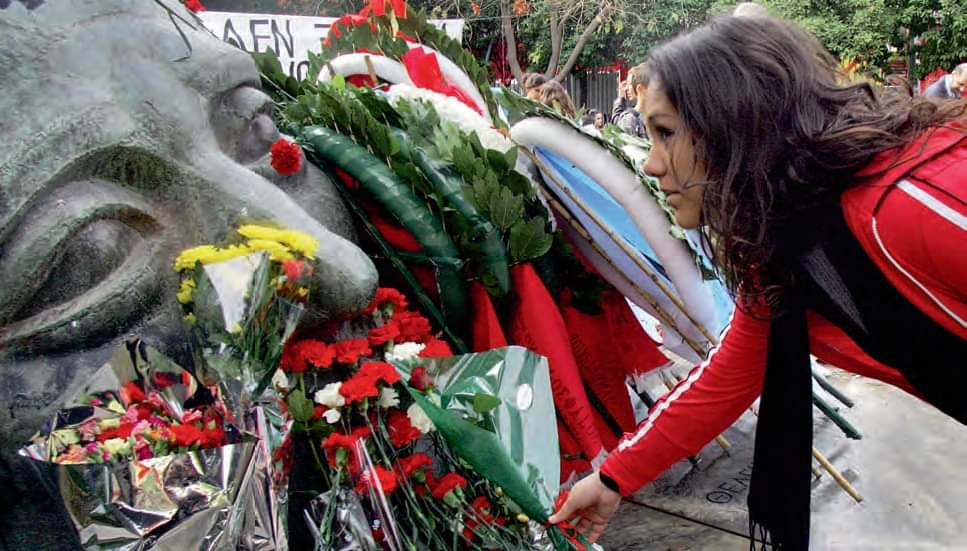 AKEL on the 49th anniversary of the Polytechnic uprising

AKEL commemorates the 49th anniversary of the Athens Polytechnic uprising against the 1967 dictatorship of the colonels in Greece. We pay tribute to the fighters who participated in the November 1973 uprising, but also to the anti-dictatorial struggle of the Greek people as a whole. We honour the fighters of Greece who fought against fascism in the military courts, prisons, torture chambers, exile and in the camps. On the occasion of the Polytechnic anniversary, we extend a warm fraternal greeting to the Greek people, who remain to this day an irreplaceable pillar of support for Cyprus and its struggles.

The popular uprising of the Polytechnic continues to move and inspire the peoples and especially the young generation in Greece and Cyprus because its emblematic demand “Bread – Education – Freedom” have not only not been realised, but has become more urgent every day. The slogans-symbol written on the gates of the Polytechnic “USA out – NATO out” do not only remind us of the identity of the bosses of the hated Junta, but also become relevant once again, given that in Greece the American-NATO presence is expanding dangerously, while in Cyprus the ruling DISY party is now openly putting forth the “idea” of Cyprus’ accession to NATO, which is offensive to our people and history. Honouring the Polytechnic uprising is incompatible with subjugation to NATO.

The Cypriot people remember that the physical and moral perpetrators of the bloody repression of the Polytechnic uprising in November 1973 are the very same people who drowned the whole of Cyprus in blood in the summer of 1974.

The lesson of history is still totally relevant: those who in Athens and Nicosia were raising the banners of “national-mindedness” and exploiting patriotic sentiments were ultimately conscious traitors and accomplices of Turkey in the plan to partition Cyprus. That is precisely why the Polytechnic uprising and Cyprus were and will always be tied to the thread of history.

In honouring the memory of the Polytechnic and defending the anti-fascist and anti-imperialist content of the uprising, we continue the struggle for democracy, freedom and reunification.