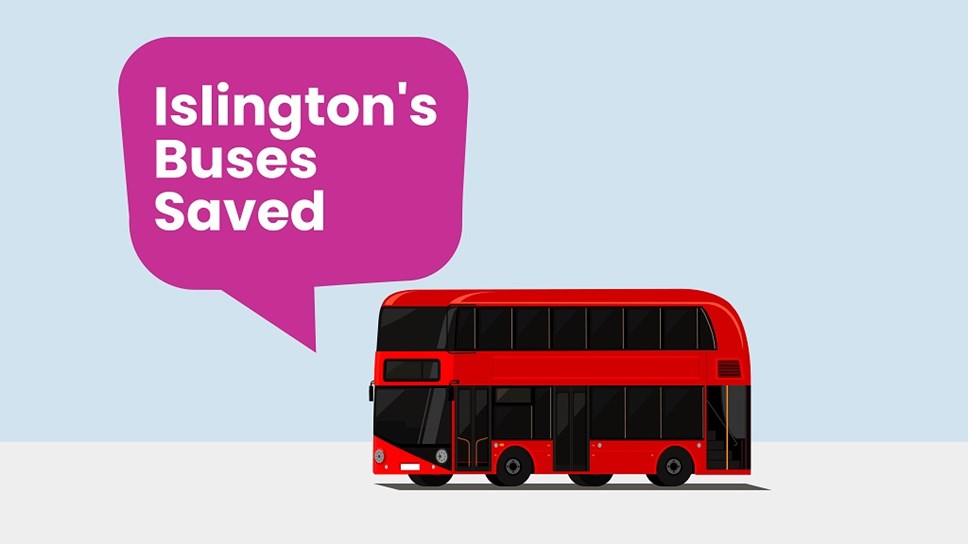 Bus services across Islington have been saved following a borough-wide campaign against proposed cuts, it has been announced today.

In June, Transport for London (TfL) put forward proposals for significant changes to bus services across London, due to a lack of funding from central government and a fall in passenger numbers since the start of the pandemic.

The proposals would have involved sweeping changes to the local bus network, including cutting the route 4 entirely, cutting back the 254, 259 and 476 routes, and re-rerouting the 214 so that it would no longer run through the borough.

This would have made it harder for local people, especially disabled people and those on lower incomes, to travel to key sites such as the Whittington Hospital, St Bartholomew’s Hospital and Moorfields Eye Hospital.

The council quickly agreed a motion to “Save Islington’s Buses”, calling on central Government to agree a funding deal to save TfL’s bus services. The council encouraged local people across the borough to take part in TfL’s consultation on the proposals, to ensure that their concerns could be heard.

Having agreed a funding deal with central Government, TfL has today announced that all the Islington bus services that had been threatened with cuts or changes have been saved – marking a victory for Islington’s campaign.

Cllr Rowena Champion, Islington Council’s Executive Member for Environment, Air Quality and Transport, said: “Today’s news is a welcome relief for people across Islington who rely on bus services, which are the cheapest, most accessible way to travel around the borough, and are vital to making Islington a more equal place.

“The proposed cuts would have made it harder for vulnerable people to get to hospital appointments, would have restricted a cheap mode of transport during a cost-of-living crisis, and would have led to children needing to take multiple buses to get to school.

“We’re delighted that local people’s voices have been heard, and that TfL has chosen not to cut vital bus services in Islington.

“The cost of living crisis, the climate emergency, and the ongoing recovery from the Covid-19 pandemic have made bus services more important than ever, as an accessible, cost-effective, and more sustainable alternative to cars. As a council, we will continue to do all we can to protect vital bus services.”

The council is committed to supporting and encouraging local people to travel in more sustainable ways. A total of 16.6% of journeys in Islington are made by bus, and buses were responsible for just 3% of total greenhouse gas emissions by transport in the UK in 2019, with cars being responsible for 68%.

As part of its determination to tackle the climate emergency and create a more equal future, the council is continuing to make it easier for local people to travel sustainably – by introducing people-friendly streets, School Streets, and cycleways across the borough.