Germany will do its utmost for resumption of Cyprus talks, says Scholz after meeting Anastasiades 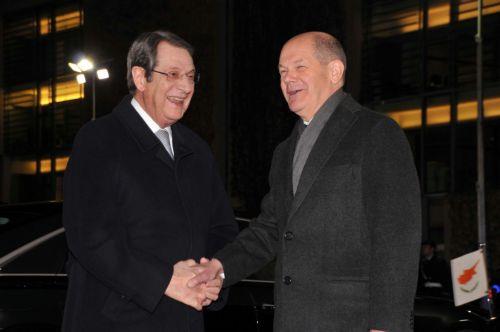 He was speaking during a press conference with President of the Republic of Cyprus Nicos Anastasiades after a meeting the two had in the German capital, noting that Berlin will do whatever it can for resumption of the dialogue, based on international law.

The two men also agreed on closer cooperation in the field of energy as well as migration.

Regarding the Cyprus problem, Anastasiades clarified that there can be no chance for a solution based on Turkey’s demands for a two-state solution which are unjustified and against international law.

Anastasiades called on Ankara to change its stance as the “prolonged tension for a solution that is not based on UN resolutions, worsens relations between the EU and Turkey. The only thing that Turkey will achieve is to be excluded,” he added.

Chancellor Scholz pointed out that the Republic of Cyprus’ relations with Turkey are “significant and should be resolved through dialogue, based on international law.”

He also talked about good cooperation opportunities in the field of energy, adding “my impression is that Cyprus is willing to contribute towards this direction and we hope other countries will follow suit.”

In the start of his statements, the Chancellor referred to the Russian invasion of Ukraine, noting that the bombing of civil structures and civilians is a “flagrant violation of international law” and must be “terminated the soonest.”

According to Scholz, Germany and Cyprus agree in condemning the Russian invasion and imposing sanctions.

He said that in relation to the Cyprus problem, “Germany strongly supports a bizonal bicommunal federal solution, based on UN decisions” and called for a new dynamic for the resumption of the talks which Germany supports in every way.

On his part, President Anastasiades thanked the German Chancellor for his stance on the migration issue, adding that Germany showed its solidarity by agreeing to take on 500 refugees from Cyprus. He said that there must be a “common European approach on the basis of solidarity by all European states.”

Asked by CNA about Turkey’s instrumentalisation of the migration issue, President Anastasiades said that Turkey is indeed instrumentalising the migration problem and the Cypriot delegation provided data during its talks with the German Chancellor that illegal migrants are transported from Turkey to the occupied areas and from there to the areas controlled by the Republic of Cyprus, and as a result, asylum applicants now constitute 6% of the population of Cyprus”.

Scholz said that no country can overcome the migration issue alone and that Germany will cooperate with Cyprus, proving this way its solidarity and adding that Europe needs a common strategy on the issue.

Regarding the energy issue, the Chancellor said “we are working with Cyprus and other countries in the region on the big reserves and this cooperation will be intensified in the future”.

President Anastasiades added that a country that wants to accede in the EU, cannot have revisionist policies that endanger peace in the region and help Russia deviate from the EU sanctions.