Cyprus Tourist arrivals of 2023 may exceed those of 2019, Transport Minister says 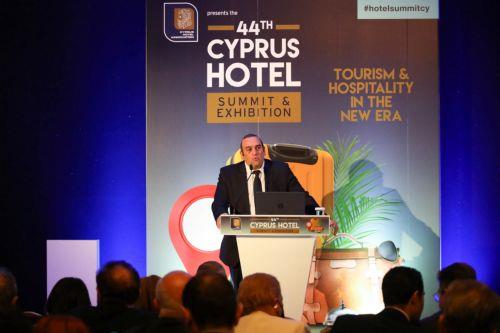 Tourist arrivals in 2023 may exceed those of 2019 through concerted efforts between relevant Ministries and the airports operator, Transport, Communications and Works Minister Yiannis Karousos said addressing the 44th Cyprus Hotel Summit and Exhibition, organised by the Cyprus Hotels Association, on Tuesday.

Referring to the a new incentives scheme to boost Cyprus’ connectivity, Karousos said that the goal is to have passenger traffic of 13.7 million by 2027. He explained that the scheme has two aims, to retain existing destinations and to add new ones and to reduce the ground services cost.

“We are proud to have achieved the goal of creating the appropriate climate. Cyprus is a country in which an airline can invest,” the Minister noted, referring to the increase in connectivity both by air and sea.

He focused in particular on recent announcements by airlines who increased the number of routes offered for Cyprus, pointing out that it is not necessary for Cyprus to have a national carrier.

On his part, Deputy Minister of Tourism Savvas Perdios who took part in a panel discussion during the conference expressed the conviction that in few years, arrivals in Cyprus from the EU will reach 50% of total arrivals, following the increase in air connectivity.

Referring to steps taken to overcome consecutive crises in recent years by Cyprus and the Deputy Ministry, Perdios said that they focused in supporting hotel employees, increasing quality of the tourist product on offer and in marketing and a new brand for Cyprus.

He expressed the view that all three goals have been successful, adding that in a few years 50% of tourist arrivals on the island will be from the EU.

Deputy Tourism Minister of Greece Sofia Zacharaki said hat Greece upgraded its brand name and managed to have the same income from tourism as in 2019. Right now, she pointed out, the country is focused in sustainability in order to overcome the challenges brought about by the energy crisis.

Deputy CEO for Hungary’s Tourism Strategy Ivett Bődi outlined the challenges and goals her country has set for tourism until the end of the decade and focused on industry infrastructures.

Secretary General of the Jordan’s Ministry of Tourism Emad Hejazeen said that tourism is a priority for the country as it contributes 50% of Jordan’s GDP. The first steps to deal with recent crises have to do with funding and protecting employees, he noted. He added that Jordan and Cyprus have many similarities in the the tourism product and the goals they set to achieve.