Reunification a core concern of China and Cyprus, the Republic of Cyprus has the right to develop its energy resources 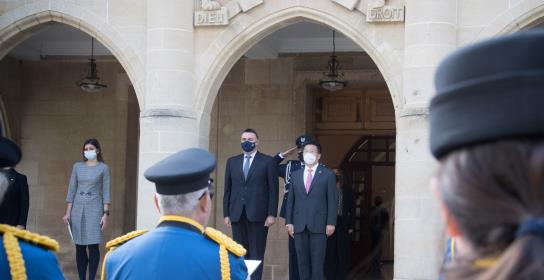 Νational reunification is the common core concern of both Beijing and Nicosia, says China’s Ambassador to Cyprus Liu Yantao, and notes that world peace and prosperity may be guaranteed only by respecting international law. In an interview with the Cyprus News Agency, the Ambassador also refers to the right of the Republic of Cyprus to develop its energy resources by pointing to a joint statement the two countries made in 2021, underlining, among others, their respect for maritime rights according to the United Nations Convention on the Law of the Sea. “China firmly adheres to this principle and calls on relevant parties to resolve differences through peaceful dialogue and consultation, so as to avoid fueling uncertainty and instability in the region” he adds.

Commenting on recent tension in the Taiwan Straits, which intensified last month amid a visit by US House Speaker Nancy Pelosi in Taipei, the Ambassador says it was caused by the US side, which must therefore bear all the consequences. Any attempt to deny the one-China principle “will only end in failure” he adds and notes that China stresses the need for peaceful reunification, but “will not renounce the use of force” as the last resort and reserves the option of taking “all necessary measures.”

Asked if the situation may escalate in the future, the Ambassador says that peace and stability across the Taiwan Straits best serve the well-being of his compatriots on both sides of the Straits and the interests of countries in the region.

According to Ambassador Liu, the current crisis across the Taiwan Straits is unilaterally provoked by the US. “Despite China’s many representations, the US still allowed Nancy Pelosi to visit Taiwan and insisted on selling weapons to Taiwan. In the face of provocations that endanger China’s sovereignty and territorial integrity, China has no choice but to take resolute countermeasures” he notes.

He points to the Taiwan Policy Act of 2022, the US Senate Foreign Relations Committee passed on September 14 and says that China repeatedly expressed its firm opposition and urged the US side to halt the Act.

“The one-China principle constitutes the political foundation of China-US relations. It is against jurisprudence and justice to wantonly interfere in the internal affairs of another sovereign country through domestic law and condone separatist forces. It is bound to have extremely serious consequences for China-US relations and peace and stability across the Taiwan Straits once it becomes law” the Ambassador notes.

His country, he goes on, will take all necessary countermeasures to safeguard national sovereignty and security as well as the overall stability of the region, subject to the progress and final outcome of the Act.

Ambassador Liu further says that the US has always been “inconsistent in its words and deeds” on the One-China policy.

He points to the 1978 China-US Joint Communiqué on the Establishment of Diplomatic Relations, which states that the US government “acknowledges the Chinese position that there is but one China and Taiwan is part of China” and that the US recognizes the Government of the People’s Republic of China as “the sole legal Government of China.” “Within this context, the people of the United States will maintain cultural, commercial, and other unofficial relations with the people of Taiwan” the Communiqué reads.

But for the Chinese Ambassador “the reality is that the US is looking for various excuses to meddle in Taiwan affairs.”

In recent years, he adds, the US side has openly put on the table the Taiwan Relations Act and the Six Assurances to Taiwan, which China has never recognized and which are in contradiction to the provisions of the three China-US joint communiqués, and has arranged the US House Speaker, MPs and government officials to visit Taiwan to improve the level of official contacts between the US and Taiwan.

The purpose of such actions is, according to Ambassador Liu, to disrupt cross-Strait relations and contain China by constantly obscuring and hollowing out the One-China principle. “We firmly oppose such actions and urge the US side to abide by the commitments made in the Communiqués on its establishment of diplomatic relations with China, instead of infringing on China’s sovereignty and territorial integrity and introducing new elements of instability and insecurity into the Taiwan Straits” he adds, noting that both the government and people of China have a firm will, strong determination and strength to safeguard their sovereignty and territorial integrity.

Any attempt to distort facts and dispute or deny the one-China principle will only end in failure, he adds.

Asked to identify potential side effects due to a growing military presence in the Taiwan Strait, affecting either supply chains or energy, in a manner comparable to the aftermath in Europe due to the war in Ukraine, the Ambassador refers to the situation in Europe by noting that “NATO, led by the United States, ignored Russia’s security concerns, violated its commitments, and expanded eastward five times, which eventually sparked the Ukraine crisis.”

“The US keeps improving the level of official contacts with the Taiwan authorities and deploying its warships at China’s doorstep in support of the Taiwan separatist forces, maliciously driving a wedge between the Chinese Mainland and Taiwan, and grossly interfering in China’s internal affairs” he adds.

Moreover, he says that China’s corresponding countermeasures are firm, strong and proportionate. “Our military exercises are open, transparent and professional, in line with both domestic law and international law and practices” he adds.

“The perverse actions of the US in violation of the basic norms of international relations should be condemned and stopped with utmost effort by the international community” he adds.

Asked if Beijing is considering reunification through peaceful means or by force, Ambassador Liu says that the current and previous leadership of the People’s Republic of China have all stressed the basic policy of “peaceful reunification and One country, Two systems”.

China, he adds, has just released a white paper entitled “The Taiwan Question and China’s Reunification in the New Era”, which points out that national reunification by peaceful means is the first choice of the Chinese government in resolving the Taiwan question, as it best serves the interests of the Chinese nation as a whole.

“We will work with the greatest sincerity and exert our utmost efforts to achieve peaceful reunification. But we will not renounce the use of force, and we reserve the option of taking all necessary measures” the Ambassador underlines.

He says that “this is to guard against external interference and all separatist activities” and in no way does it target fellow Chinese compatriots in Taiwan. As the Ambassador put it “use of force would be the last resort taken under compelling circumstances.”

Asked about Cyprus’ public reaffirmation of the one-China policy and whether this brought the two countries closer, the Ambassador says that the one-China and one-Cyprus policy is the cornerstone of the establishment and development of diplomatic relations between China and Cyprus.

“Cyprus has always adhered to the one-China policy, and firmly supported China’s efforts to safeguard its sovereignty and territorial integrity, showing a high level of political mutual trust between China and Cyprus as Strategic Partners, for which China highly applauds” he says.

Moreover, he says that the mutual support between China and Cyprus is not only based on friendship, but also on the principles and ideas the two sides share as responsible members of the international community.

Following a recent announcement of natural gas discoveries in block 6, off the coast of Cyprus, the Ambassador was also asked about China’s support to the right of the Republic of Cyprus to develop energy resources in its Exclusive Economic Zone, in the backdrop of illegal Turkish drilling activities in past years.

In this regard, the Ambassador notes that at the end of 2021, Cyprus and China released a joint statement on the establishment of China-Cyprus Strategic Partnership, in which the two countries reaffirmed the shared commitment to respecting the territorial sovereignty and maritime rights and interests of all countries in accordance with international law including the UN Charter and the United Nations Convention on the Law of the Sea.

“China firmly adheres to this principle and calls on relevant parties to resolve differences through peaceful dialogue and consultation, so as to avoid fueling uncertainty and instability in the region” he adds.

As for tourism ties, Ambassador Liu says China and Cyprus are planning to hold an online tourism promotion event by end of this year.

He adds that representatives from governments and tourism industry associations on both sides will discuss on how to encourage bilateral people-to-people exchanges and tourism cooperation, to move things closer to open direct flights.

He notes however that the opening of direct flights “is a big thing” as it involves policies, technical matters, and in particular market prospects.

China supports further bilateral discussions on opening direct flights between China and Cyprus at an early date on the basis of commercial cooperation, he concludes.