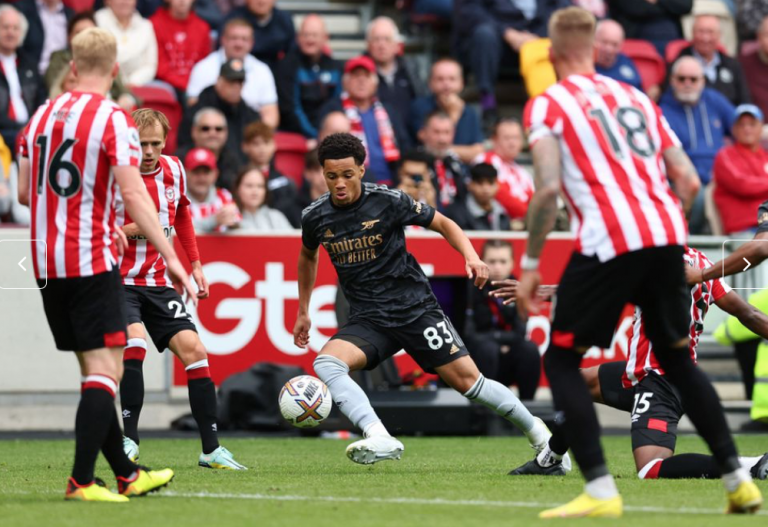 Arsenal’s Ethan Nwaneri became the youngest ever Premier League player aged 15 years and 181 days as the Gunners defeated Brentford to return to the top of the table.

Mikel Arteta sent on the schoolboy midfielder in the closing moments with his side leading 3-0.

William Saliba set Arsenal on their way to a sixth win in seven top-flight games this season after the France defender climbed high to head Bukayo Saka’s corner in off the post.

It was 2-0 inside the opening half an hour as Brazil forward Gabriel Jesus, a £45m signing from Manchester City in July, headed Granit Xhaka’s measured chip past David Raya for his fourth goal in Arsenal colours.

Portuguese midfielder Fabio Vieira capped a dominant Arsenal display by marking his first Premier League start since joining from Porto with a goal from 25 yards.
Neal Maupay opened his account for Everton to earn their first Premier League win of the season with victory over West Ham at Goodison Park.

Maupay, who joined from Brighton for £15m in August, turned on Alex Iwobi’s pass and smashed the ball past Lukasz Fabianksi as it sat up on the bounce.

The hosts had chances to extend their lead, with the impressive Demarai Gray having an effort saved by Fabianksi.

West Ham, whose tally of three goals is the joint fewest in the top flight, were toothless in attack.

Michail Antonio could only direct a header straight at Asmir Begovic, while Said Benrahma’s effort came back off a post.

Everton climb to 13th in the table, while West Ham remain in the relegation zone in 18th.
Erling Haaland continued his impressive scoring run as Manchester City went back to the top of the Premier League with a comfortable win against 10-man Wolves at Molineux.

The hosts had only touched the ball once before Jack Grealish put City in front after just 55 seconds.

Haaland scored for the seventh consecutive game and took his tally to 14 in the past nine when he doubled the visitors’ advantage with a long-range effort after 16 minutes.

A spirited Wolves continued to try and attack, even after Nathan Collins was sent off for a high first-half tackle on Grealish.

However, with Raul Jimenez missing through injury and new arrival Diego Costa not deemed fit enough for any involvement beyond meeting some fans before the game, they never looked likely to add to their paltry tally of three league goals.

By contrast, City have 23, with Phil Foden completing their victory by flicking home Kevin de Bruyne’s low cross midway through the second half.

Alexander Isak scored his first goal at St James’ Park but Newcastle remain without a win since the opening day of the Premier League season after being held by a disciplined Bournemouth.

Eddie Howe’s side fell behind against his former club when midfielder Philip Billing stretched to steer a Jordan Zemura cross from the left-hand wing past Nick Pope with just over an hour gone.

Five minutes later Newcastle were level as Isak – a club record £60m summer signing from Real Sociedad – converted a penalty after Jefferson Lerma was adjudged to have handled a Kieran Trippier cross by the video assistant referee.

The draw is Newcastle’s fifth of the season and stretches their winless run to six games, although they climb to 10th in the table.

As at all Premier League games this weekend there was a minute’s silence before kick-off, which was impeccably observed, for the late Her Majesty Queen Elizabeth II followed by the national anthem. There was also stadium-wide applause in the 70th minute in honour of her 70-year reign.
Son Heung-min ended his goal drought with a scintillating 13-minute hat-trick as Tottenham ruthlessly punished Leicester’s latest defensive horror show.

The South Korea striker responded to Antonio Conte’s decision to drop him to the bench after a barren start to the season by coming on to curl home two fantastic strikes and slot home a late third.

Spurs trailed to Youri Tielemans’ early penalty but took advantage of the Foxes’ failings at set-pieces as Harry Kane and Eric Dier nodded home from corners to turn the game around.

Villa secured only their second Premier League win of the season as Jacob Ramsey scored the only goal of the game, and Gerrard said his side reacted to the criticism they had faced.

“It wasn’t pretty or stylish but, with where we were in the league, we knew we had to do it in a pragmatic way,” said Gerrard.

“I’m really proud of the boys’ effort, application and commitment. We played better than we did last time. In football, you have to grind and fight and be committed and we worked hard today.

“We will get better in terms of style and possession and that will come but tonight was about the points.”

Gerrard’s side have made an indifferent start to the campaign but they were able to build on the battling draw against Manchester City with a deserved victory.

He added: “We had to back up our performance against Manchester City and there were a lot of eyes on us from the TV but we did it.

“Maybe we tried to force it a bit tonight but as we move up the table, maybe that’s when the pretty stuff will come. It has been a tough period but I’ve wanted to step forward and protect my players.

“I’ve tried to fight and move up this table. We have accepted a lot of criticism and it’s about reacting and that is what we have done tonight.”

Villa made nearly all the running in a game desperately short on quality and Ramsey broke the deadlock four minutes before the break after Southampton keeper Gavin Bazunu turned Ollie Watkins’ header on to the bar.

Southampton were far too timid and barely offered a threat all night, allowing Villa to close out an important triumph, their first since the second league game of the season against Everton, in comfort.

Manager Marco Silva said there are still “a lot of fights ahead” despite Fulham producing a thrilling comeback win over Nottingham Forest at the City Ground.

Fulham scored three goals in six minutes to pick up their third victory of the Premier League season so far.

“[The start of the season] has been really good. As well some games in the beginning of the season we should have got more points because we deserved it,” said Silva.

“But it is just seven games. It is the start of the season. We go into the international break with confidence then we prepare for the next one.

“A lot of fights ahead of us. We are happy with how we started but we have to keep going.”

Forest had led early on when Taiwo Awoniyi headed in a corner but were stunned by a remarkable Fulham comeback in the second half.

Tosin Adarabioyo headed in the equaliser after 54 minutes, before Joao Palhinha’s stunning strike made it 2-1.

Before Forest could catch their breath, Harrison Reed stroked in a third.

Fulham appeared to take control of the match as the second half wore on but a wonderful flick from Forest substitute Jesse Lingard set Brennan Johnson free and he teed up Lewis O’Brien.

Momentum switched back to Steve Cooper’s side but time ran out to score another as Fulham clung on for a victory which saw them move up to sixth place in the table.

“It was a fantastic feeling for us even if we suffered a little in the last few minutes and they had belief they could score again,” added Silva.

“I have to congratulate the players because it is really tough to do something they have done. It’s the way we work and prepare for the game to learn every single day.

“We are a group and a unit working hard to achieve. We believe in ourselves and always trust in ourselves.”