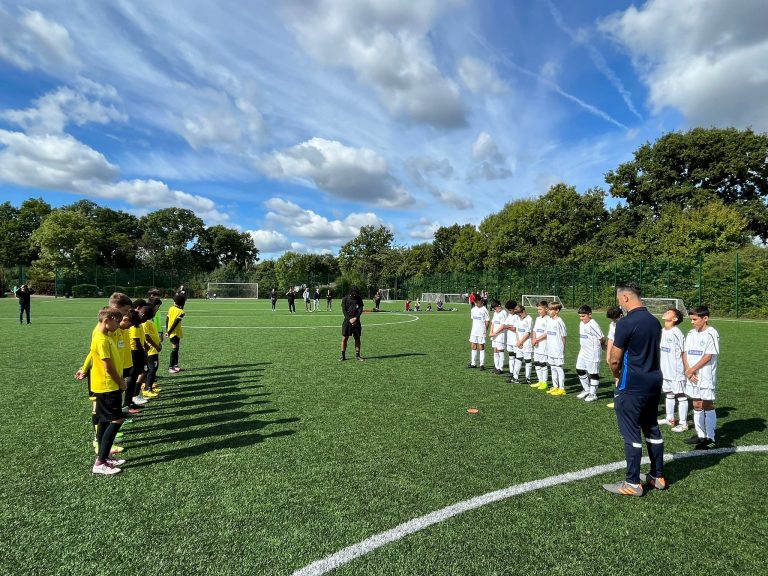 Community grassroots club Omonia Youth FC, sponsored by Diamond Corp. Ltd Newly welcomed the new grassroots youth football season last weekend with plenty of action and some fantastic results.
Sophia Karanicholas and Samuel Arthur’s Under 15 Girls got their season off to the perfect start with a brilliant performance in a pulsating end to end match. In training the girls have been working on passing, particularly switching play and through balls and the girls really put this training into practice last Saturday. Before the amtch, the team were given the task of trying to complete 10 through balls and five long range passes.
The opposition came out organised, passing the ball well but after 15 minutes it was the Omonia Youth Girls who took the lead. Within 10 minutes, the opposition had equalised and they quickly followed that up with a second goal. Even though the Omonia Girls created four goal-scoring opportunities, it was the opposition who scored again to go 3-1 up at half time.
During half time, the girls accurately assessed their performance and identified the changes necessary. In the second half, the objective was to press and keep the ball in the opposition half. It was brilliant to see the girls come out with a sense of urgency- the passing was crisp, and the pressure was full on. Within 12 minutes of the restart, the girls clawed back a goal. The belief was visible – the comeback was on! An offside flag denied the Omonia Girls a goal but they continued unfazed. Within 2 minutes of the offside decision, Gina scored. The game was now tied at 3-3 with 16 minutes to go. Against the run of play, the opposition scored again. There were only 10 minutes left for Omonia Girls to get something from the game who for the remainder of the game pinned their opponents into their half and got their reward with a goal, capitalising on a poor pass to score. With 3 minutes to go, the game restarted, now at 4-4 and as soon as the whistle was blown, the press was on. Every girl picked up a player and inevitably, Omonia Girls forced the opposition to make an error. Shekhinah created space for herself and took a shot that flew past the keeper into the back of the net. With seconds left, the girls continued to attack until we heard the final whistle, a fantastic come-from-behind victory. It was a great game of football to watch with both sets of players committed to playing good football and competing in the right spirit too. Player of the Match was awarded to debutant Ellie, who is also playing up a year. Goal Scorers were Shekhinah (3), Mia B and Gina.
Jack Markou’s Under 12 Green got their season under way with a 3-2 win in the cup.
David Poncia and Savva Zavros’ Under 18 Gold started life in the Under 18 league with a 3-2 home win. In an underwhelming first half the boys found themselves 2-0 down at half time. The second half saw far more desire to play higher up and take the game to the opposition and three well-taken saw the boys run out 3-2 winners. Goals were scored by Man of the Match Vlad (2) and Danny. 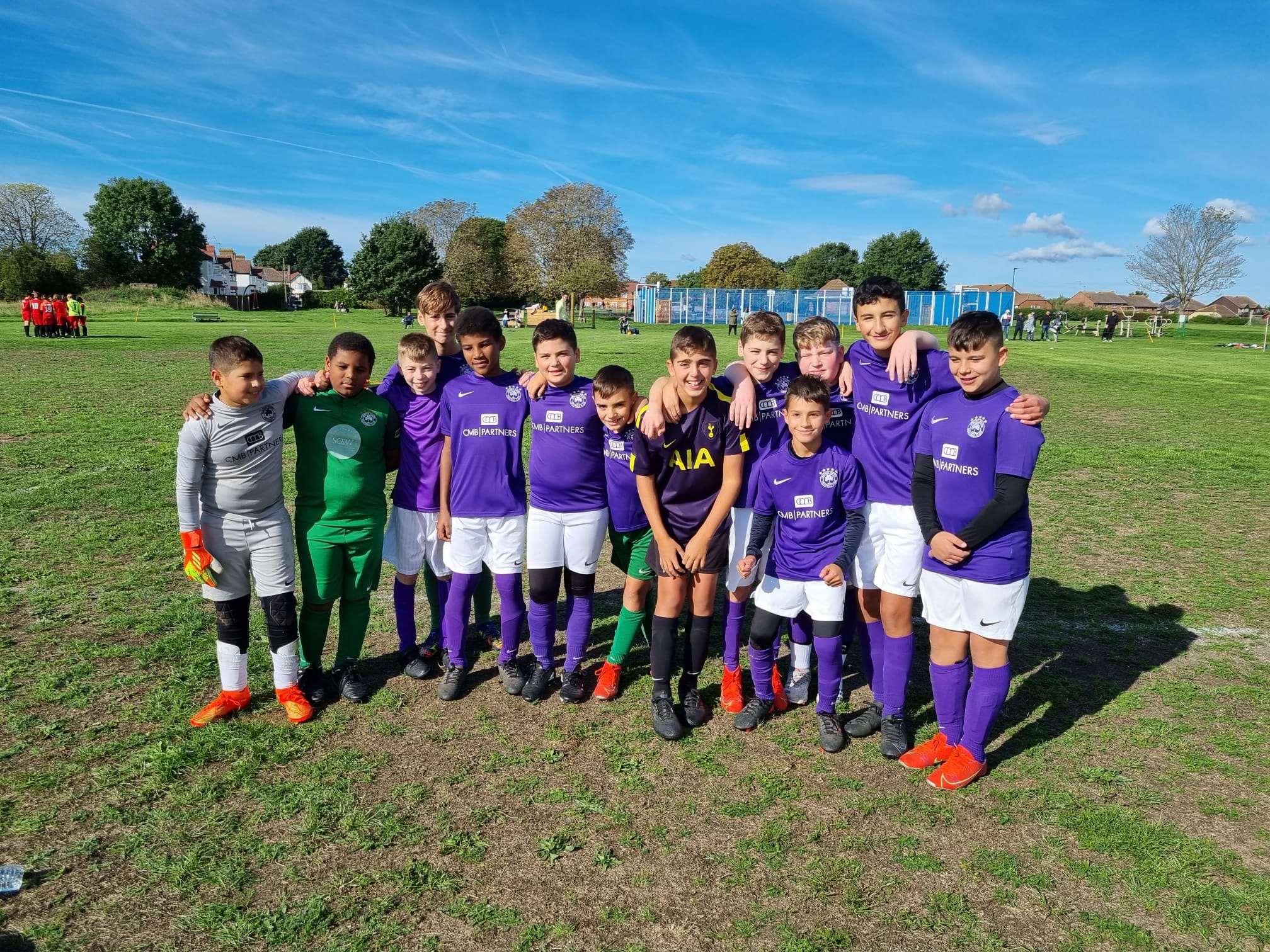 U12 Green
Zeno Vryonides, Mario Georgiades, Elias Neocleous and Vas Simou’s Under 15 Green have been moved up a division and had a positive start to the new campaign, winning 5-3. On a difficult playing surface the boys still showed great tam work and great play. They stayed strong defensively and in midfield by keeping their shape and working well as a unit. There was also lots of creativity exemplified by the number of clever through balls played which was exciting to see.
George Constantinou’s Under 12 Gold had a tough opening game having been drawn against a team in a higher division in the cup. In a what was a hard fought game, the boys played some great football but the key was to limit mistake and to stay in the game when they were on top, which we did brilliantly. As the game went on, the boys took more and more control and they were rewarded in the last five minutes with a fantastic goal from David who was brilliant all game. It turned out to be the winning goal. Man iof the Match was awarded to Aiden who had a fantastic game in the centre of midfield and Yiodi who didn’t lose a single one-on-one. 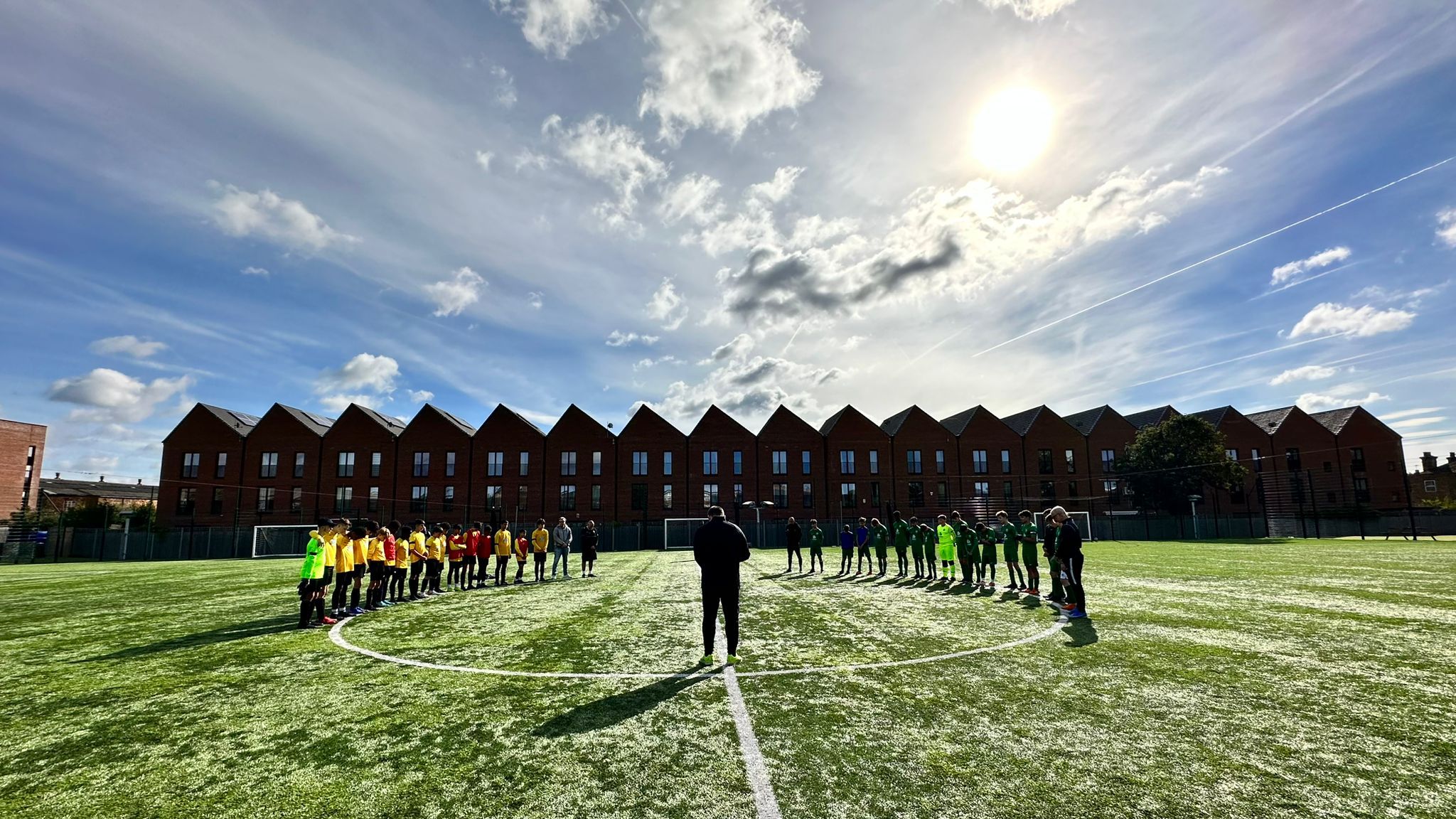 U14 White
Myri Demetriou and Kyri Eleftheriou’s Under 14 White played out a tough 0-0 draw in their season opener. The Under 14 White started positively and played some really nice football. There was plenty of one-touch play and combinations all over the pitch and some great use of width. The boys created a number of chances, but the opposition goalkeeper was in inspired form making several superb saves. The Under 14 White pushed hard but simply couldn’t score. Player of the Match was awarded to Junior who played in an unfamiliar position and was brilliant throughout.
Michael Pieri and Harry Theodorou’s Under 18 White played their first match of their final season in youth football. With some of the players in the squad having been at the club for 8, 9 and 10 years it is a season to celebrate commitment but to also be competitive in their final season. The boys ran out comfortable 2-0 winners against and in truth, the margin of victory should’ve been greater were it not for some profligate finishing There were some excellent individual performances, not least from debutants Louie Socratous and Michael Mina. With regular goalkeeper, two stand-ins were used and they kept a cleansheet with Billy even saving a penalty! Goals were scored by Andreas Stavrinou and Captain Sami Hrisrov. Man of the Match was given to Yianni Sophocleous who was outstanding at RB. 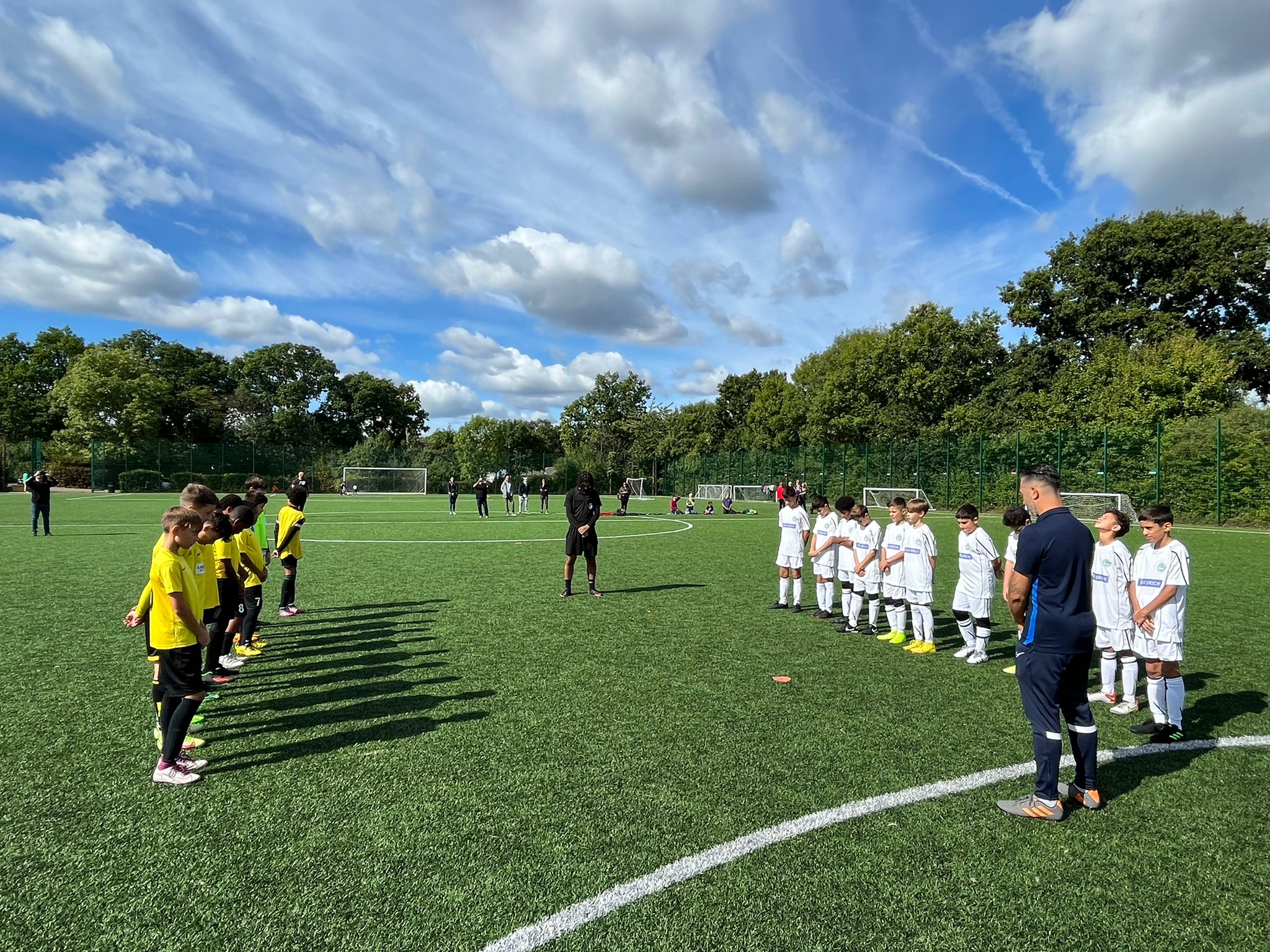 U12 White
Nick Paraskeva and George Agrotis Under 12 White played their first ever competitive match and were drawn against tough opposition in the league Cup. After a beautifully respected minute’s silence for the passing of Queen Elizabeth II the boys got off to a very difficult start, conceding early soft goals in quick succession, which is very unlike the team to end the first half 6-0 down.
After a reflective half time team talk the boys came out playing far better, with more intensity and playing without fear. Roman scored a screamer of a free kick from just inside the opposition half. Alex then finished off a lovely team move coming in from the right wing to tap in which made it 6-2. The opposition got two more goals to complete the scoring. The boys can only learn from where they need to improve and areas to develop. Goals were scored by Roman Paraskeva and Alexander Michael
Chris Gregoriou’s Men’s Team, who are sponsored by Crown Mobile Tyres and CMB played their second match of the season and were up against one of the established teams in the Division. The objective was to put everything right that they failed to do in our first game and get the three points we needed. There was a change of formation to tighten up the midfield and specific players were given individual tasks to achieve their objective to play progressive, attractive football. With instructions given, the team performed to their potential and came out handsome 5-2 winners with Man of the Match Yianni Polycarpou scoring a hat-trick. Daniel Ndoj and Demitris Christodoulou got the other two goals. 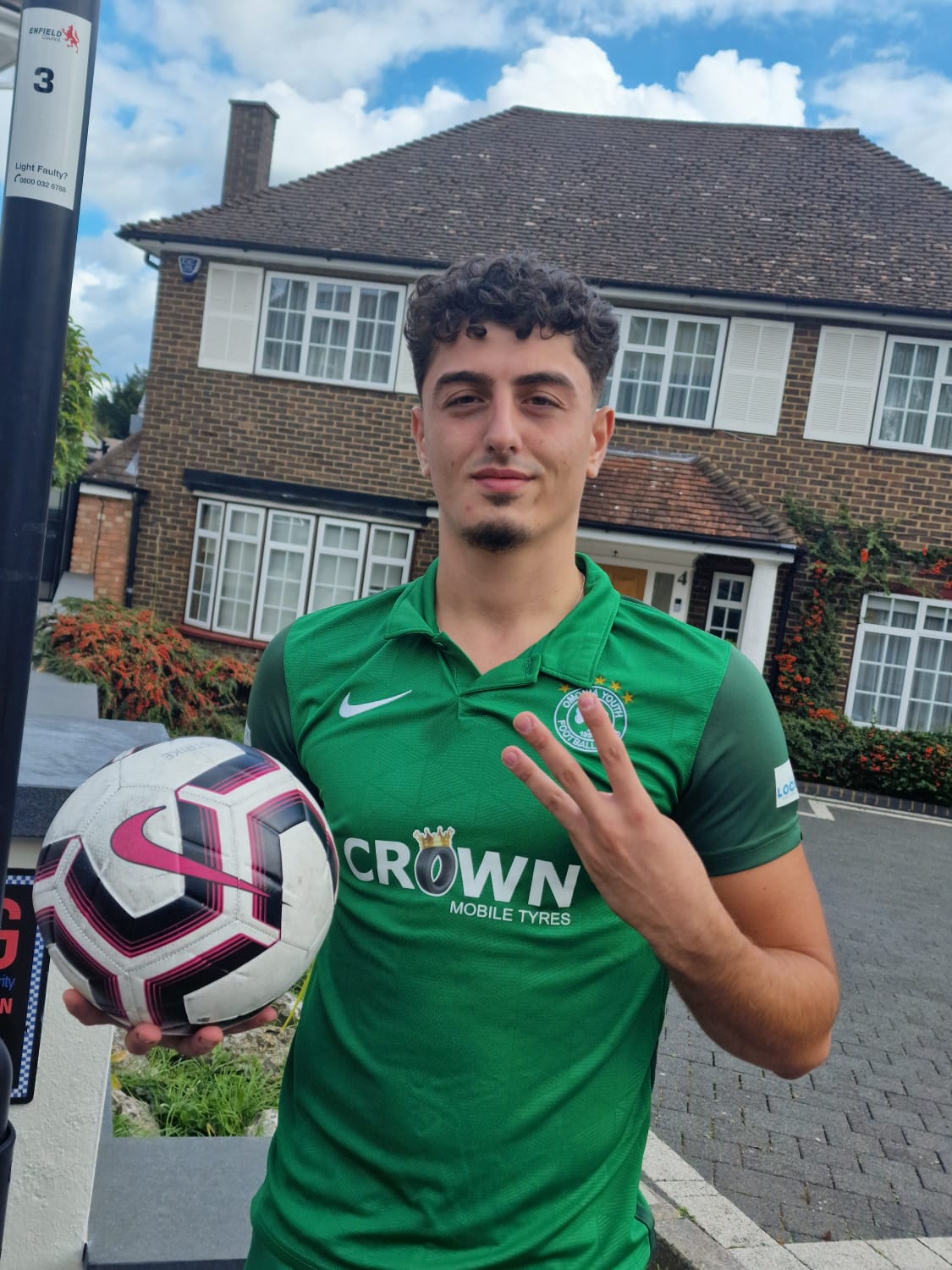 Yianni Polycarpou
Should you feel enthused and want to know more about Omonia Youth FC, you can contact the club at [email protected],