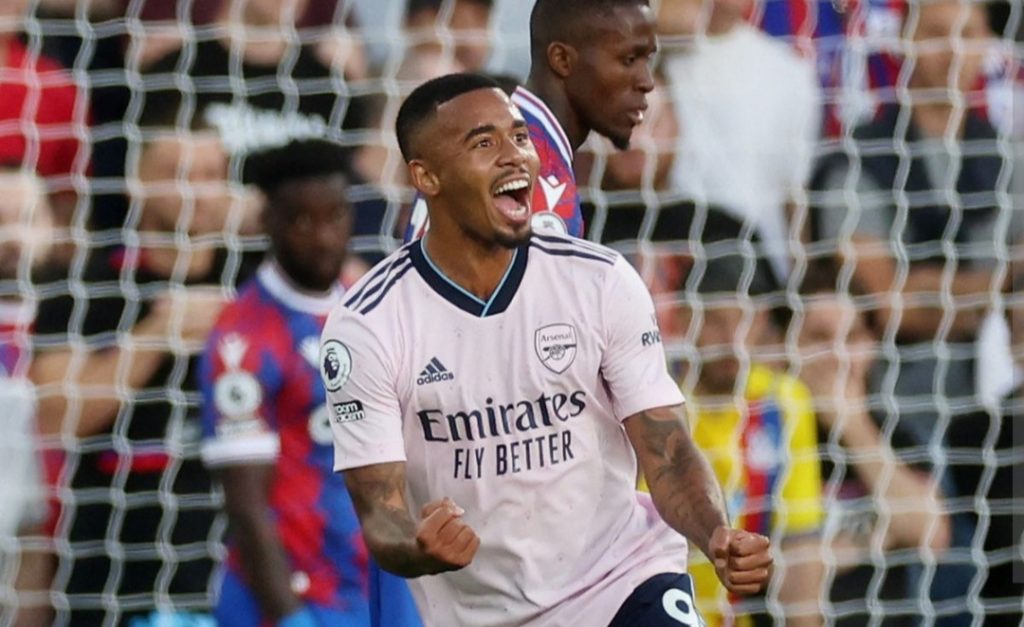 Arsenal battled to beat Crystal Palace 2-0 on Friday as the new Premier League season got underway, with Gabriel Martinelli scoring the first goal before home defender Marc Guehi turned the ball into his own net late on at Selhurst Park.

Arsenal striker Gabriel Jesus, who arrived from Manchester City in the close season, looked set to get off to a flying start by dancing through the Palace defence only to see his shot blocked, with Martinelli dragging the rebound wide of the post.

The hosts wasted another great chance to draw level after the break when Wilfried Zaha sliced open the Arsenal defence with a perfect pass but again Ramsdale was quick to react, getting out to block Eberechi Eze’s shot.

After guiding his side to a fifth-place finish last term, Arsenal coach Mikel Arteta looked worried as they became increasingly ragged in the second half but, aside from Zaha, the Palace attack looked out of sync

Oleksandr Zinchenko, another new signing from City, also looked lively and had an early shot blocked as Arsenal quickly raised the tempo but the Ukrainian soon had a hand in the opening goal as Palace were caught flat-footed at a corner.

Bukayo Saka’s inswinger found Zinchenko in acres of space and he headed the ball back across goal where Martinelli was on hand t nod it into the net.

Palace could have levelled before the break as Odsonne Edouard headed goalwards, but visiting goalkeeper Aaron Ramsdale pulled off a superb reflex save to preserve his side’s lead.

Sensing they might snatch a draw, Palace coach Patrick Viera threw everyone forward for the last 15 minutes but the visitors doubled their lead when Saka’s cross was deflected into his own goal by Guehi in the 85th to seal the points for the away side.

“We started really sharp … to win here you need to suffer,” Arteta told Sky Sports. “We’ve done it and that’s part of the mentality that we want to build, to come to these places and find a way to win,

Title contenders Liverpool could only manage a draw at Fulham on the opening Saturday of the Premier League season while Chelsea and Tottenham Hotspur made winning starts to the new campaign.

Liverpool had to come from behind twice to cancel out goals from Fulham’s Serbian striker Aleksandar Mitrovic with new signing Darwin Nunez and Mohamed Salah on target in the 2-2 draw for Juergen Klopp’s side.

Spurs also went behind, at home to Southampton, but then Antonio Conte’s side cruised to a 4-1 victory over the Saints.

A penalty on the stroke of halftime from Jorginho was enough to give Chelsea a hard-fought 1-0 win at former favourite Frank Lampard’s Everton.

Mitrovic scored 43 goals in 44 games as Fulham won promotion from the second-tier Championship last season and continued that form as he put the London side ahead in the 32nd minute.

Kenny Tete’s cross from the right was just what the tall centre forward relishes and he out-muscled Trent Alexander-Arnold at the far post to head home.

Runners-up last term, Liverpool struggled to get a foothold in the game but introduction of Nunez in the second half had the desired impact.

The hosts fell behind to a James Ward-Prowse volley in the 12th minute but dominated throughout with goals by Ryan Sessegnon, Eric Dier and Dejan Kulusevski sealing the win.

Dier glanced in Son Heung-min’s cross with a stooping header in the 31st minute to put Tottenham ahead, and the hosts should have been out of sight before the interval.

The Uruguayan, bought from Benfica for an initial fee of 75 million euros ($76.36 million) brought the visitors level with a clever flicked finish just after the hour mark.

Despite having barely threatened after the break, Fulham were soon back in front as Mitrovic was ruled to have been tripped in the box by Virgil van Dijk, and the Serb stepped up to stroke home the spot kick to make it 2-1.

If signing Nunez was Liverpool’s highest profile move in the market, the new contract for Salah is arguably their most significant piece of business and the Egyptian showed his value again poking home the equaliser from close range.

Tottenham’s close-season recruitment has boosted hopes in north London that Antonio Conte’s side can get closer to the top two this season and they confirmed that positive perspective with an impressive start.

Mohammed Salisu clumsily turned Emerson Royal’s cross into his own net in the 61st minute, and two minutes later Royal set up the impressive Kulusevski to guide an exquisite finish beyond Bazunu whose saves kept the score respectable.

Chelsea peppered Everton’s goal with 13 corners in the first half but looked set to be frustrated as the interval approached, only for Jorginho to convert from the spot after Ben Chilwell had been fouled to give the visitors the lead.

Nottingham Forest’s return to the top flight after a 23-year absence ended in a 2-0 loss at Newcastle United with Fabian Schar scoring a screamer before Callum Wilson sealed the win.

There was a better start for another promoted side, Bournemouth, who beat Steven Gerrard’s Aston Villa 2-0 with goals from Jefferson Lerma and Kieffer Moore.

Leeds United, who battled against relegation last season, had a new look with four debutants and enjoyed a 2-0 win at home to Wolverhampton Wanderers.

A brilliant save from Edouard Mendy early in the second half to deny Abdoulaye Doucoure preserved Chelsea’s advantage, and that was as good as it got for a disappointing Everton, who only survived relegation by the skin of their teeth last term.

England forward Raheem Sterling, making his first league appearance for Chelsea after a summer switch from Manchester City, could have marked an impressive debut with a late second but saw his close-range effort deflected just wide.

New Manchester City signing Erling Haaland marked a fine Premier League debut by scoring in each half as the champions began their title defence by strolling to a 2-0 victory over West Ham United at the London Stadium on Sunday.

Haaland converted a penalty after 36 minutes and wrapped up the points with a composed finish in the second period to cap an impressive display, with his father and former City player Alfie celebrating in the stands.

New manager Erik ten Hag saw the depth of the crisis at Manchester United when his side fell to a 2-1 Premier League defeat by Brighton & Hove Albion at Old Trafford on Sunday, with German Pascal Gross scoring twice.

Brighton took the lead on the half-hour with Leandro Trossard finding former United forward Danny Welbeck who squared the ball to the back post for Gross to slot home.

Nine minutes later, Gross doubled the lead, with his sixth career goal against United, after David De Gea had poorly pushed out a Solly March drive right into the path of the German who again made no mistake.

The home side gave themselves a foothold in the 68th minute when a goalmouth scramble ended with Alexis Mac Allister turning the ball into his own net but Brighton held on for a second straight win against United and their first ever at Old Trafford.

Substitute Josh Dasilva scored a superb equaliser with four minutes remaining as Brentford came from two goals down to draw 2-2 with Leicester City in their Premier League clash at the King Power Stadium on Sunday.Timothy Castagne and Kiernan Dewsbury-Hall had scored in either half to put Leicester into a dominant position early in the second period, but Ivan Toney netted to halve the deficit and swing the momentum in Brentford’s favour.

It was the first time since 2003 that Leicester had failed to win a Premier League home game having been two goals ahead.

Leicester went ahead just past the half-hour mark as James Maddison swung in a corner and Castagne headed in at the near post, totally unmarked with no Brentford player tracking his movement.
Brentford were much improved in the second period though and scored an excellent goal on 62 minutes as Rico Henry’s pinpoint pass into the box was controlled by Toney, who blasted the ball past home goalkeeper Danny Ward.Leicester hit the post for a second time through Wesley Fofana’s header, before Dasilva produced his moment of magic to get Brentford a point.