Pelosi’s visit to Taiwan “a gross interference of our internal affairs”, says Chinese Embassy in Cyprus 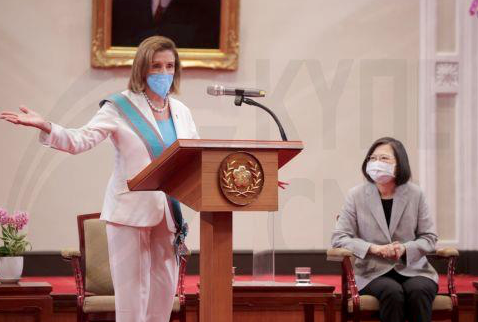 US House Speaker Nancy Pelosi’s recent visit to China’s Taiwan region is a gross interference of China’s internal affairs, a major event upgrading the substantive relations between the US and Taiwan, and sends a very wrong signal to “Taiwan independence” separatist forces, says the Spokesperson of the Embassy of China in Cyprus, in a written statement.

In a reference to Cyprus, the spokesperson says that “neither China nor Cyprus is entirely reunified till today. National unity is our two countries’ shared core concern and mission. External interference has been the biggest roadblock to the settlement of the Taiwan question and the Cyprus Problem, which the Cypriot people know better than anyone else.”

The spokesperson describes the visit as a serious violation of the one-China principle and the provisions in the three Sino-US Joint Communiqués, adding that “it has dealt a severe blow to the political foundation of China-US relations, seriously infringed upon China’s sovereignty and territorial integrity, and gravely undermined peace and stability across the Taiwan Strait”.

“The Chinese side has recently and repeatedly made its firm and strong opposition crystal clear to the US side at various levels. The Chinese side will make resolute response and take strong countermeasures to uphold China’s sovereignty and territorial integrity. The US side chose to carry on the visit despite all the warnings, therefore it must bear all the consequences arising therefrom”, the statement reads.

The Spokesperson notes that there is but one China in the world, Taiwan is an inalienable part of China’s territory and the Government of the People’s Republic of China is the sole legal government representing the whole of China.

The statements points out that in 1979, the US made a clear commitment in the Sino-US Joint Communiqués on the Establishment of Diplomatic Relations that “the United States of America recognizes the Government of the People’s Republic of China as the sole legal Government of China”.

“The one-China principle is the centerpiece of the three Sino-US Joint Communiqués, and the premise and foundation for the establishment and development of diplomatic relations between China and the US. Each composition of the US Government, including the administrative, legislative and judicial arms, is obliged to follow the foreign policy which the US government has recognized and been committed to”, the statement reads.

The Chinese Embassy in Cyprus notes also that  Nancy Pelosi is the incumbent Speaker of the US House of Representatives, and ranks second in the US presidential line of succession. “Her visit to Taiwan, in whatever form, under whatever pretext and at whatever time during her tenure, is a serious violation of the one-China policy as committed by the US Government, marking a major political provocation in upgrading the official interactions and substantive relations between the US and Taiwan, and signaling connivance and support for “Taiwan independence” separatist forces”.

The statement underlines that in the face of the total ignorance of China’s repeated representations and reckless actions by the US, “any countermeasures taken by China will be justified and necessary”.

The Spokesperson of the Embassy also points out that the one-China principle and one-Cyprus principle serve as the political foundation of the establishment and development of China-Cyprus relations.

“Neither China nor Cyprus is entirely reunified till today. National unity is our two countries’ shared core concern and mission. External interference has been the biggest roadblock to the settlement of the Taiwan question and the Cyprus Problem, which the Cypriot people know better than anyone else. The Government and people from all social sectors of Cyprus have repeatedly and openly demonstrated unwavering support for the one-China principle”, he points out.

It is also noted that this year marks the first anniversary of the China-Cyprus Strategic Partnership and that  China believes that Cyprus “will continue to stand on the right side of justice, strictly abide by the one-China principle, and oppose any infringement by external forces on China’s sovereignty and territorial integrity”.

In the meantime, the Chinese Community in Cyprus also issued a statement noting that US House Speaker and the second in US Presidential line of succession, Nancy Pelosi insisted on visiting Taiwan “in disregard of China’s repeated warnings”.

“This is a serious violation of the one-China principle and the provisions of the three China-US joint communiqués. It has a severe impact on the political foundation of China-US relations, and seriously infringes upon China’s sovereignty and territorial integrity. It severely hurts the feelings of the sons and daughters of the Chinese nation across the world, including the Chinese community in Cyprus. We express our strong indignation and condemnation on it”, the statement reads.

The Community urges the US side “to immediately stop playing the “Taiwan card” in order  to use Taiwan to contain China, stop sending wrong signals to the “Taiwan independence” separatist forces, stop the vicious acts of infringing upon China’s sovereignty and territorial integrity, and faithfully implement “five noes” commitment made by the US President Joe Biden”.