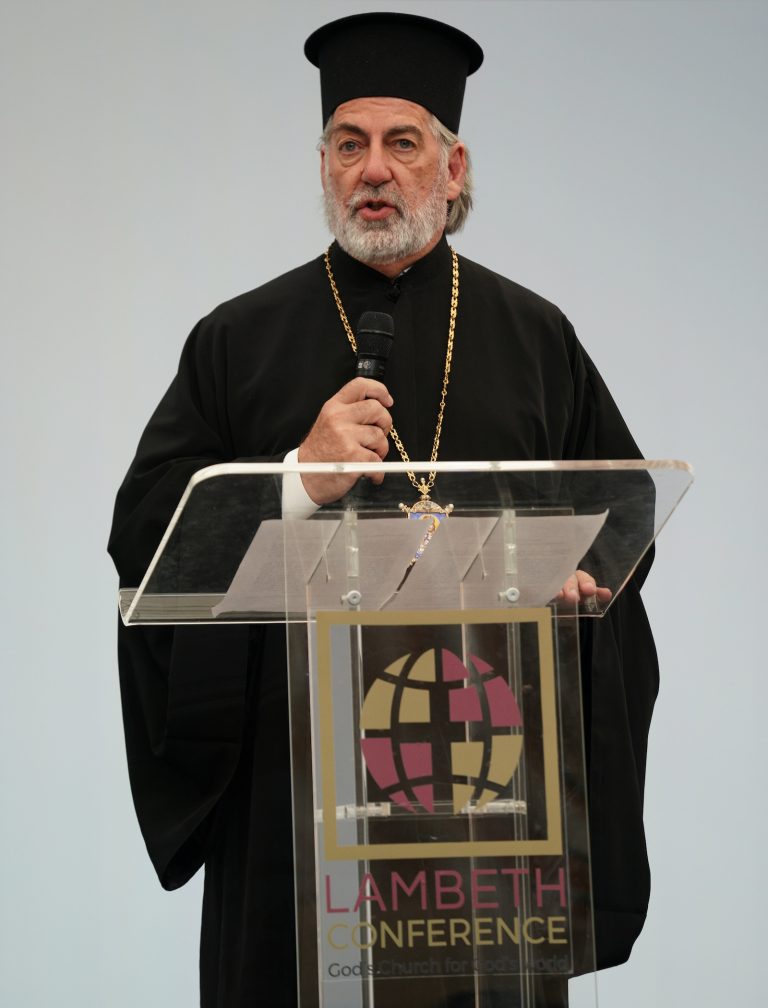 Archbishop Nikitas Speaks on Modern Slavery at Lambeth Conference
On 4th August 2022, His Eminence Archbishop Nikitas of Thyateira and Great Britain attended the Lambeth Conference as the official representative of the Ecumenical Patriarchate. During the conference, His Eminence offered to hundreds of delegates a reflection on the great ills of our day, that is, Modern Slavery and Human Trafficking.

Present at the sessions of Lambeth Conference was also His Beatitude Patriarch Theophilos of Jerusalem, and numerous Orthodox Hierarchs representing some of the Ancient Orthodox Patriarchates and local Autocephalous Orthodox Churches.

His Eminence’s full text is below:

“It is with pleasure and in in the spirit of unity and cooperation that I come before this esteemed body to share some thoughts with you on the issues of justice and peace, touching specifically on the issue of human trafficking and modern-day slavery.

Each day, newspapers, radio commentators and television personalities bring to our attention the events and challenges of our times. In their words and commentaries, we repeatedly hear about the abomination of human trafficking and modern slavery. We listen to stories of young women forced into prostitution, domestic helpers tied or chained as not to escape, beggars on the street who work for some “boss”, children abducted and sold as simple commodities, and the list goes on and on. The sins of the past are alive and thriving in a modern world that dares to speak of human rights, justice and truth. While our politicians and world leaders speak out against these injustices, laws and other measures are rarely enacted to end this abomination and evil. It is, therefore, time for us, Christians, – to unify our efforts and to do what is required by God: to speak out against injustice on every level. If this does not happen and we do not act as one, then we are not living to our fullest Christian potential, and we have failed in our calling not only as Christians but also as simple human beings.

The apocryphal words taken from the Wisdom of Solomon, remind us of our responsibilities in life –

“Listen, therefore, O kings, and understand:
learn, O judges, of the ends of the earth.
Give ear, you that rule over multitudes, and boast many nations.
For your dominion was given you from the Lord,
and your sovereignty from the Most High,
who will search out your works and inquire into your plans.
Because as servants of his kingdom you did not rule rightly,
nor keep the law,
nor walk according to the purpose of God,
he will come terribly and swiftly,
because severe judgment falls on those in high places.” (Wisdom of Solomon, 6:1-5)

As Church leaders, we are those in high places of responsibility for the caring of souls, and the judgement of God will come upon us if we fail to act. After all, indifference may be the greatest of all sins. If we, as individuals and Church leaders – people in high positions fail to labour, then we are indifferent not only to those held in bondage and slavery but also to Christ and His message of truth and liberation. Christianity is not a faith tradition of solely meditation and philosophy. Rather, it is a religion of action and “violent” resistance to evil through, first and foremost, our own spiritual conversion and transformation in Christ.

I might dare to say that in our days and times it has become vogue to speak about human trafficking and modern slavery and, on occasion, we tend to toss these phrases into our statements about social justice, human dignity, and other “catchy” expressions. But in reality, what have we really done to heal a broken world? I might also dare quote from the Liturgy of Saint Basil the Great, who says – “we have done nothing good upon the earth”. For if we had acted and done what is good, right, true and just, some things may have changed. It is so sad that, we, as Christians, so often focus on what separates us and what distinguishes us in our “compartment of Christianity” that we have forgotten the very essence of all things – Jesus Christ – the one Christ Who belongs to all and Who is the source of all things. It is this Christ Who demands that we come together now and act as a body, as the body of believers in Him. We were anointed at Pentecost and empowered with grace by the Holy Spirit and now we must “seek justice, correct oppression ” as reminded by the Prophet Isaiah (Isaiah 1:17) and this must be done, not to fulfill a moral code, but to transform and transfigure society and this world in Christ Jesus, crucified and risen from the dead, having always within us the strong desire to move from the “image” to the “likeness” of God, as we were created.

If this happens, then we can understand that overcoming the differences, including the theological ones, is a possibility and we can walk together in faith, with hope, and love in our hearts.” 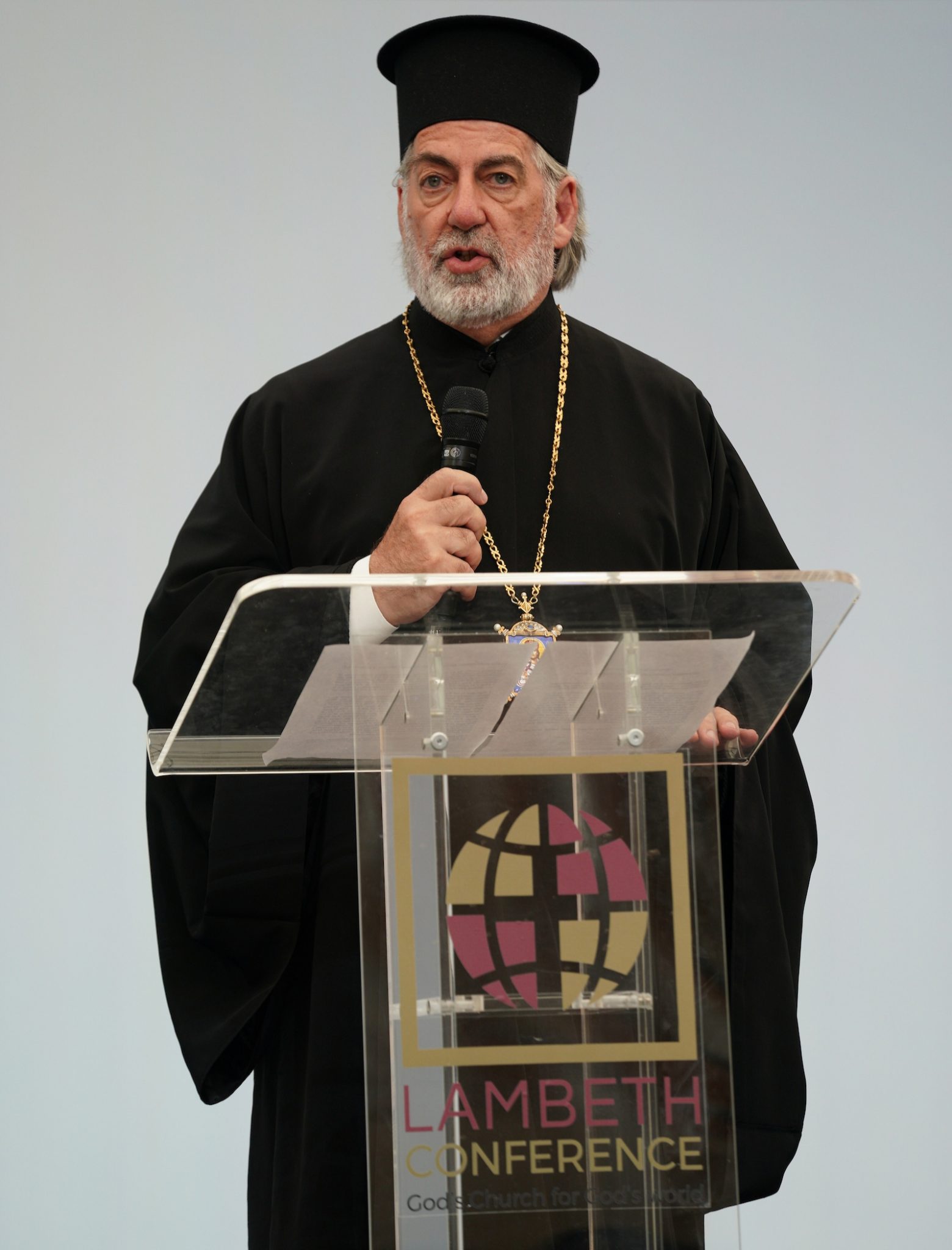 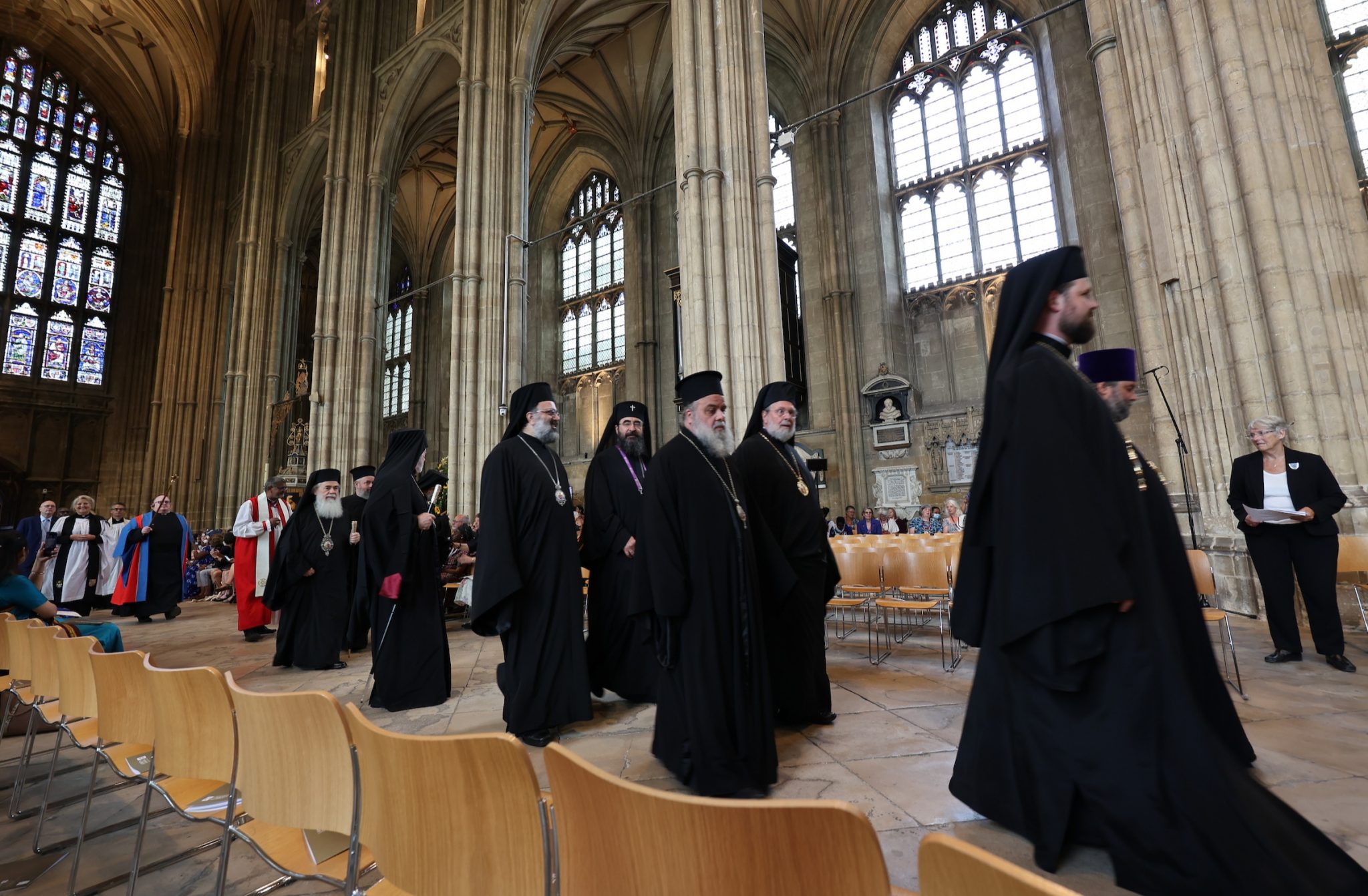 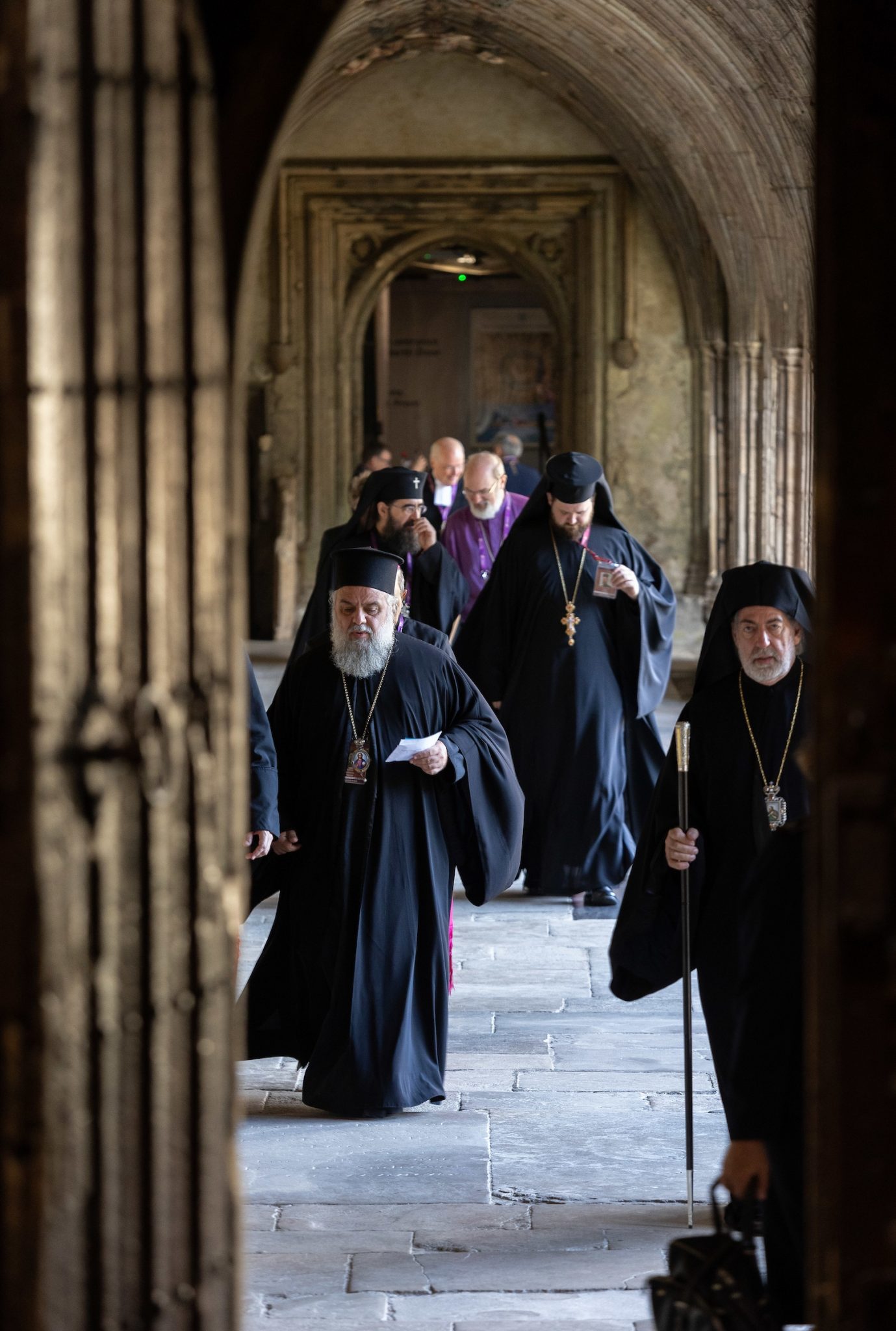 Guests walk through the Cloisters as Bishops, their spouses and invited guests attend the Opening Service at Canterbury Cathedral during the 2022 Lambeth in the United Kingdom. Photo: Neil Turner for The Lambeth Conference. Sunday 31st July 2022 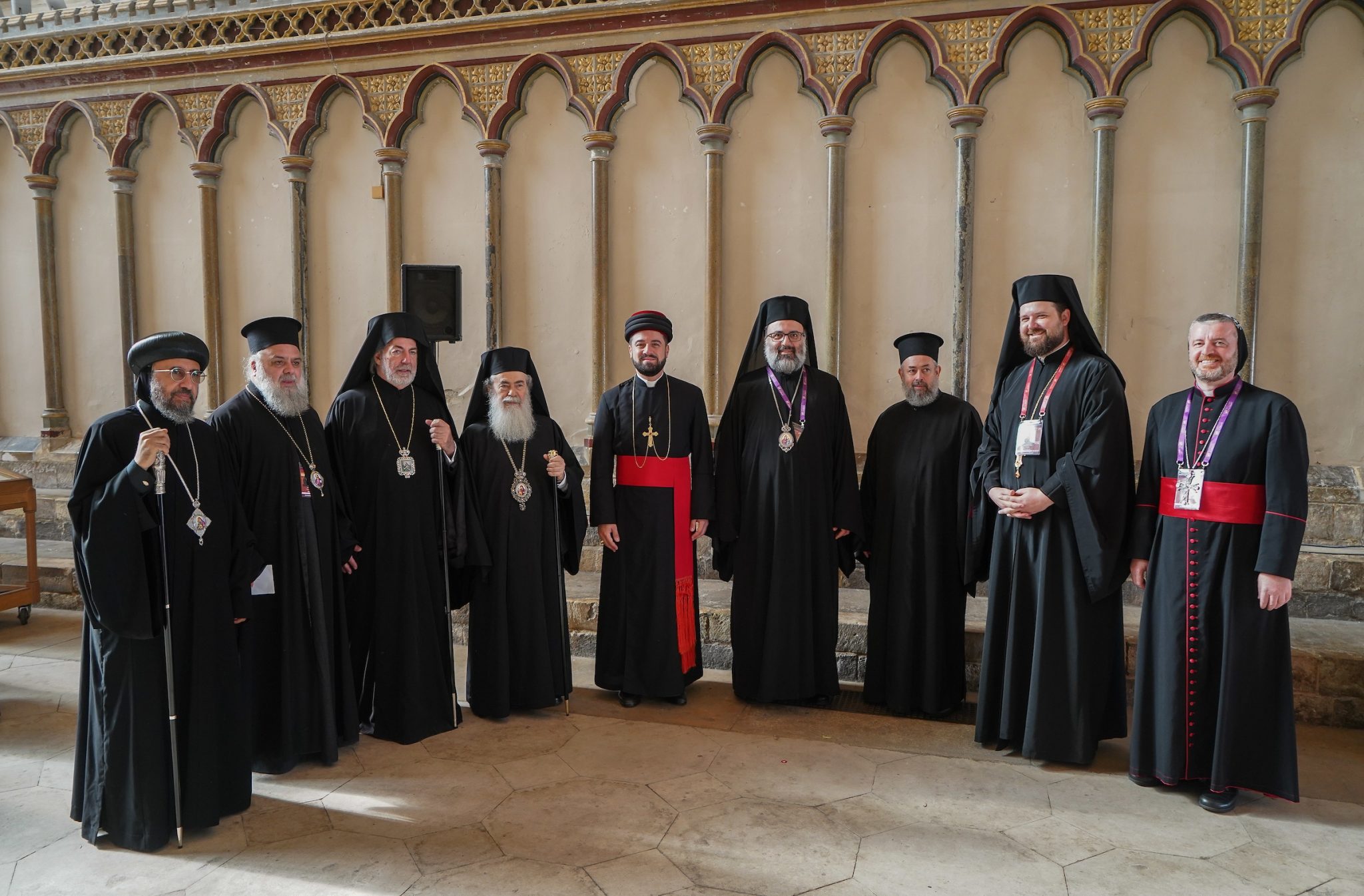 Faith leaders from outside of the Anglican Communion are welcomed as guests at the Opening Ceremony in Canterbury Cathedral for the 2022 Lambeth in the United Kingdom. Photo: Revd Neil Vigers for The Lambeth Conference. Sunday 31st July 2022