We are once again at a critical crossroad as regards the Cyprus problem, Foreign Minister says 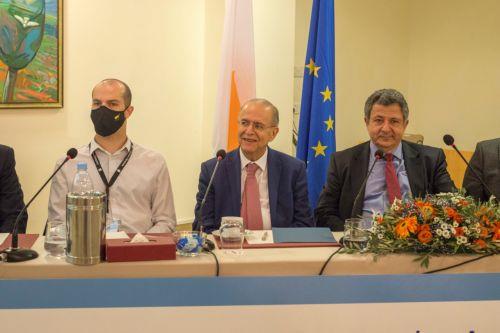 We are once again at a critical crossroad as regards the Cyprus problem, Foreign Minister Ioannis Kasoulides said Friday addressing the World Conference of Overseas Cypriots that wraps up in Limassol.

The Minister said that the government of Cyprus has repeatedly expressed its will for the immediate resumption of the Cyprus talks, while referring to Ukraine, he said that the international community must not have double standards since the same principles that are being violated by Russia, are being violated by Turkey in Cyprus for 48 years now.

In his speech, Kasoulides said that we are once again at a critical crossroad as regards the Cyprus problem, noting that this time it is even more critical than before.

He stressed that the government of Cyprus has repeatedly expressed its will for the immediate resumption of the Cyprus talks and has demonstrated its commitment to the effort to create the necessary positive climate between the two communities.

Kasoulides referred to the package of ambitious Confidence Building Measures proposed by the Greek Cypriot side and  unilateral initiatives to create a positive climate with the aim to improve the daily life of Turkish Cypriots. The CBMs, he said would be mutually beneficial for both sides, but noted that the leadership of the Turkish Cypriots, ignoring the Turkish Cypriots themselves, has rejected the proposals of the President of the Republic.

It is up to the Turkish Cypriots themselves to decide if they envision living in a reunited Cyprus, member of the EU and the UN, or if they want to be dependent on Turkey, he said, noting that our side is doing everything it can “so that it does not give Turkish Cypriots away to Turkey.”

He noted that during his visits abroad in the past seven months his foreign interlocutors have expressed their support for an agreed solution of the Cyprus problem based on the UN resolutions.

Referring to Ukraine, the Foreign Minister noted that the same principles that are violated by Russia in the case of Ukraine, are also violated in the case of Cyprus by Turkey, for 48 consecutive years.

“So, one cannot be selective, nor promote a political approach of double standards”, he added.

Kasoulides told participants attending the session that the role of their organizations is of utmost importance in maintaining the identity of Cypriots as well as in promoting the just cause of our people both in Cyprus and abroad.