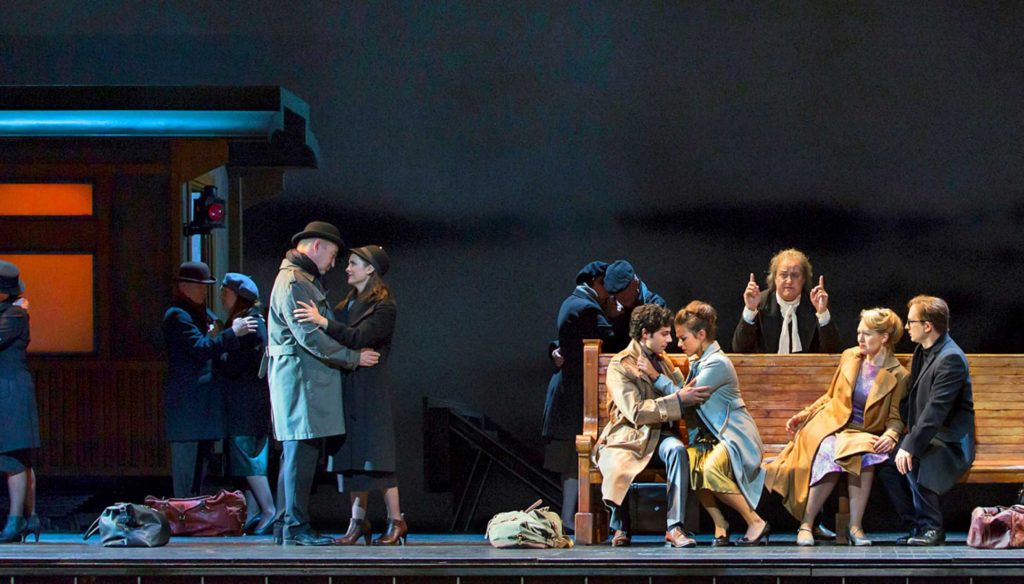 Questions for the cloth

Grieving mum Tina Southbury (Sarah Twomey) wants to have Disney balloons on display at her beloved daughter’s funeral. Parish vicar David Highland (Alex Jennings) is not keen believing death to be a solemn event deserving of a more serious and solemn approach. Local parishioners side with Tina and soon enough the sharp-witted and frequently drunk reverend finds himself at odds with public opinion. Nonetheless this is almost a side show to his home life where his family are a in a mini meltdown. Stephen Beresford’s amusing new black comedy The Southbury Child (Bridge Theatre) delves into the muddled world of relationships in families and communities and how faith has and has not adapted to an ever changing world.
Beresford chucks in a gaggle of local characters who look as though they have wandered in from Dibley and when they are in full flow the play sparks into scenes of hilarity and parochial madness, especially during a cracking fist act. Pregnant policewoman Joy (Holly Atkins) paints quite a picture in her motorbike leathers while local gossip Janet (Hermione Gulliford) treads on the vicar’s corn when describing the church as “a building…like a backdrop”, knowing full well his flock now relies on the likes of “Miss Potts and whispery Elizabeth” to fill the pews. All the action takes place in the vicarage which looms large over the action, a place where Highland’s frustrated wife Mary (Phoebe Nicholls) has endured many years of obedience and service to husband and establishment.
Jennings commands the stage with a strong presence and stature which belie a man as vulnerable as any other to life’s temptations, especially drink which he can then use as an excuse for his acerbic wit. As good as he is the play leaves too many questions unanswered, and one of the central underlying themes of classism is only hinted at but never properly explored. Tina, Twomey is excellent, along with brother Lee (Josh Finan) are the catalyst for all the shenanigans but we see far too little of her and when she does appear the atmosphere is electric as the two polar opposites clash and open up wounds that still beset the church today. We can’t all be cut from the same cloth. Nevertheless, it is an enjoyable and provocative play, crisply directed by Nick Hytner. I wonder what the recently retired Reverend Richard Cole’s would make of it?
Meanwhile Gracia Erinoglu has an eclectic time…
Revival Director Katharina Kastening has come up with a modern interpretation of Così Fan Tutte (Royal Opera House) that, at different moments, had me thinking Love Island meets Cyrano and Charlie Chaplin. A melange of styles that rippled with subterfuge, skulduggery and an abundance of drama Queen. There were lots of nods to modern day culture with the ubiquitous mobile phones being used for numerous selfies. Throughout it all the comic timing was beautifully executed and one or two performances shone through the chaos.
Serena Gamberoni, dressed like a sexy, sassy temptress, hints of Sophia Loren perhaps, was hilarious and duplicitous, inveigling Fiordiligi and Dorabella to step over to the dark side and have an affair whilst their men were at war. They came across like a couple of lovestruck teenagers cum neurotIc drag queens. Alfonso meanwhile was dressed like a Papist. So you can see it was quite an eclectic, and enormously enjoyable experience. Musically speaking the singing was superb as were the always excellent orchestra and chorus.
Finally, Athasha Lyonnais finds meaning in silence…
Metamorphoses (Lyric Shaftesbury Avenue), is Maria Caruso’s expressive new solo show, showing off the formidable performer’s capabilities. Throughout the tight 90 minutes, Caruso conveys a range of overwhelming emotions and personal transformations using both ballet and modern styles, telling a story of anguish, passion and redemption without speaking a single word. As a result, it’s a little difficult to confidently describe what the piece was about, but it reflected on the different roles we inhabit throughout our life, some exhilarating and some unbearable, in a way that felt both incredibly personal to Caruso’s life experiences, but also in a way that as an audience member, it was very easy to take personal meaning from.