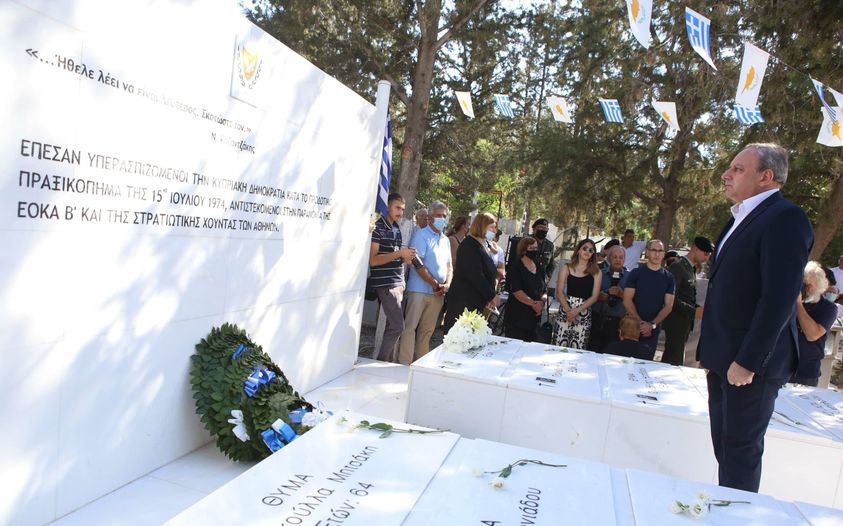 The impunity of the organisers and instigators of the coup led to the shameless actions of all those who to this day are adding insult to injury, whilst attempting to falsify history, the General Secretary of AKEL stressed on the occasion of today’s black anniversary of the coup.
Unfortunately, Stefanos Stefanou pointed out, they want to make us believe that there was an invasion without a coup, that there was a coup without the participation of Cypriot coupists – of EOKA B and not only – that there were equal responsibilities, “violence and anti-violence” and “discord”, something he said, which was also heard today in the special plenary of Parliament.
Speaking to ‘Astra’, S.Stefanou pointed out that AKEL had catharsis as its main slogan and was exerting pressure for it to proceed.
Unfortunately, there was just some elementary catharsis, which was cancelled, he said, with the reinstatement (by the Clerides DISY government in 1993) of the 62 public servants who were dismissed from their jobs because of their active involvement in the coup, and who received hefty retroactive compensation.
The General Secretary of AKEL also criticized the government’s absence from the memorial services and commemorations in honor of those who resisted the coup and the policy of state-owned radio/television station RIK, which as a public broadcaster did not consider befitting, as he said, to show the memorial services in honor of the heroes who fell defending democracy last Sunday, which he said showed that expediencies were being served.