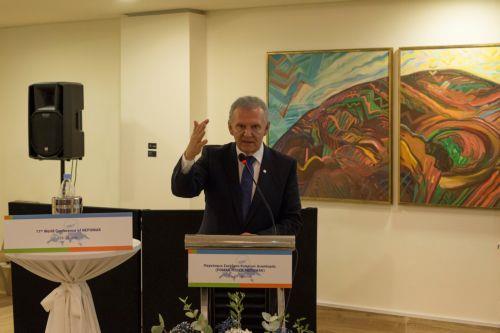 Presidential Commissioner, Photis Photiou outlined a National Strategy for Cypriots of Diaspora which includes how to make more use of the role of overseas Cypriots, strengthen the new generation and promote the Cyprus problem in their home countries.

Photiou said it is clear that it is important to highlight the reciprocal relationship between Cyprus and Cypriots of the diaspora.

For this reason, he added, the fundamental pillars that need to be highlighted are the role of the federations and organisations, strengthening the connection of young people with their roots, promoting traditions and culture, coordinating actions to promote our positions on the Cyprus problem as well as developing international cooperation with the exchange of know how and common actions as well as simplifying procedures for those wishing to repatriate.

He also said the Online Platform for Cypriots of the Diaspora, which will operate in cooperation with the Deputy Ministry of Research is an innovative platform that reaches out to all overseas Cypriots.

The platform which will soon come into operation, will allow all Cypriots of the Diaspora to register and will include business people, professionals, academics, and others.

An educational segment was also presented entitled “Know your roots” which teaches the language and culture as well as the island’s history and can be used by all people, especially the younger generation.

Photiou called on federations to promote the platform.

The Cyprus Chamber of Commerce and Industry presented also a programme to young entrepreneurs under the age of 40. A documentary on the exhumation and identification work regarding the missing persons of Cyprus was also presented.