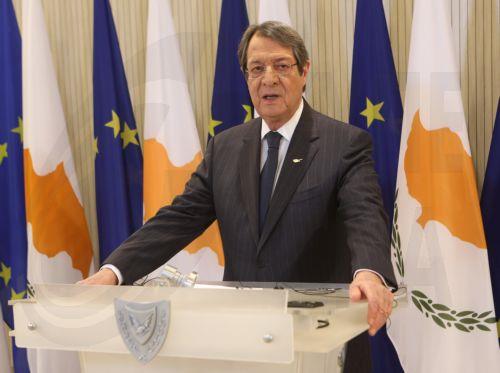 President of the Republic Nicos Anastasiades expressed the wish that the Turkish Cypriot and especially Turkey will realise that it is to the benefit of all to achieve a solution in Cyprus on the basis of the UN Security Council resolutions.

President Anastasiades, who received earlier Assistant UN Secretary-General for Europe, Central Asia and Americas in the United Nations Department of Political Affairs Miroslav Jenča, said that the UN will make efforts to create conditions for the resumption of the dialogue through the General Secretariat.

Replying to questions from the press in Limassol, ahead of the 10th award ceremony of the Cyprus Investment Promotion Agency awards, he said that the most important thing from his meeting with the UN official, is that the UN will make efforts to create conditions for the resumption of the dialogue through the General Secretariat, either by the Assistant UNSG or others who represent the UN Secretary General, “and there is no need for an appointment” of a special or personal or other envoy.

He expressed the wish that the Turkish Cypriots and especially Turkey will realise that it is for the benefit of all to follow a course towards the achievement of a solution in Cyprus, always on the basis of the UNSC resolutions and the European acquis communautaire.

Asked about a UN special envoy, he reiterated that “instead of talking about an appointment of a special, personal or other envoy of the UNSG from a third or other country, this role will be assumed by the UNSG through UN officials.”

The President was also asked to comment on the proposals presented by the Turkish Cypriot leader during his meeting with the UN official, which refer to a  future cooperation on the basis of “two states”. President Anastasiades said that during his meeting with Jenča, this morning, there was no reference at all, that either the UN or the Assistant UN Secretary-General were aware of any Turkish Cypriot proposals. “Neither did we, and until now I am not aware of their content. So, depending on the content we will give our response”, he replied.