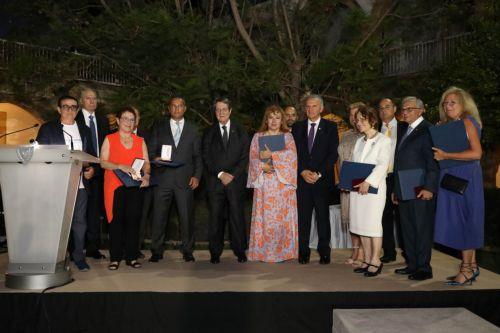 President of Cyprus Nicos Anastasiades has honoured overseas Cypriots for promoting the Cyprus cause in their home countries.

The President hosted a reception on Thursday evening at the Presidential Palace grounds, on the occasion of the World Conference of Overseas Cypriots, during which he awarded overseas Cypriots for their overall contribution.

The President said their struggles “have given us strength and courage and many times” allowed or dictated to governments to adopt and support the efforts we make to find a just, viable and functional solution to the Cyprus problem.

He also said he feels happy to have been given the opportunity to meet selfless people who through personal and financial sacrifices fought for their country.

At the same time, “I feel proud because your presence overseas has given you the opportunity to distinguish yourselves as world citizens. And it is by no coincidence that we have decided to award the medal of outstanding contribution to distinguished Cypriots who contribute and honour us abroad”, the President added.

The President congratulated the honourees and urged young people to follow their example.

Presidential Commissioner Photis Photiou said the Cypriots honoured are persons who have distinguished themselves in their lives and scientific and professional activity, have honoured and continue to honour Cyprus, therefore they are worthy of every recognition and praise.

Accepting their awards, the honourees expressed love for Cyprus and appreciation. They spoke briefly about their work and said all overseas Cypriots work tirelessly and consider it a duty to defend the rights of Cyprus.