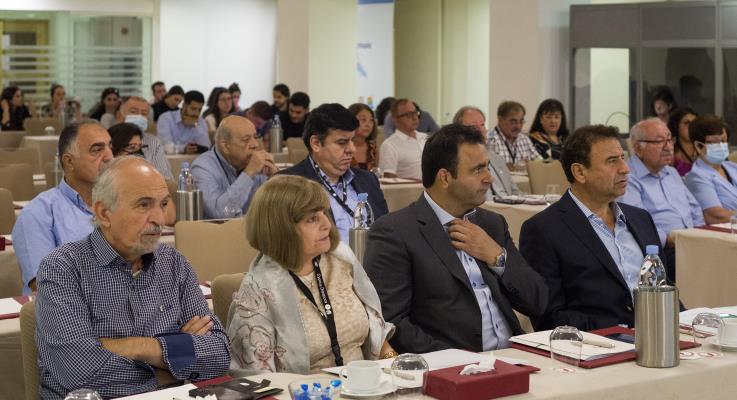 Heads of the World Federation of Overseas Cypriots (POMAK) and the International Coordinating Committee – Justice for Cyprus (PSEKA), Andreas Papaevripides and Phillip Christopher respectively, assured on Friday that overseas Cypriots will intensify their efforts about the Cyprus problem once they return to their countries of residence.

They were speaking to the press in the framework of the World Conference of Overseas Cypriots that wrapped up in Limassol. The Central Council of POMAK and PSEKA and the World Conference of NEPOMAK also adopted a resolution, calling upon Turkey to cease its illegal actions and the international community to assume its responsibilities.

Papaevripides said that they will continue with more intensive efforts for the Cyprus cause, noting that the Russian invasion against Ukraine is an opportunity to show the similarities with the case of Cyprus.

He noted that although the international community is more concerned about Ukraine, the parameters are the same and it is an opportunity, “so that something can be done for Cyprus as well.”

“We are returning having this willingness, and this is what we will do. We will not hand over Cyprus to the Turks,” he stressed.

In his statements, Christopher noted that the role of the Diaspora is even more important in these critical moments with Turkey’s stance becoming more aggressive and recalled the prevention of the sale of the F-16 to Turkey.

He noted that despite the fact that Ankara’s position has been upgraded because of the invasion in Ukraine, there is an opportunity for us to prove that the invasion against Cyprus in 1974 are the same thing.

“We are going back, ready to continue the struggle” he said, adding that on September 20 to 22 they will hold a Congress in Washington, in the presence of the Foreign Ministers of Cyprus and the US, and US Congresspersons.

Meanwhile, in a joint resolution, they express disappointment with the fact that the efforts for a comprehensive settlement of the Cyprus problem have failed as a result of the negative and intransigent positions of the Turkish side and they call upon the UN to work for the resumption of the talks.

The resolution condemns Turkey’s and the Turkish Cypriot leader’s insistence for the recognition of the illegal secessionist entity in the occupied areas, the continued occupation of 37% of the island’s territory, the status quo, the presence of Turkish troops and Turkey’s actions in Varosha and the Cypriot Exclusive Economic Zone.

They express their full support for the efforts of the Cypriot government and the Greek Cypriot community to work towards a solution that will free Cyprus from the Turkish occupation and reunite the land and its people, in a just and viable settlement, secure the human rights and fundamental freedoms of all Cypriots as well as their common future in the EU.

They also call upon the  international community to exert pressure on Turkey to implement the relevant resolutions on the Cyprus issue and the EU to protect the integrity and sovereign rights of its member states and to decisively denounce Turkey’s gunboat policy in the Eastern Mediterranean.