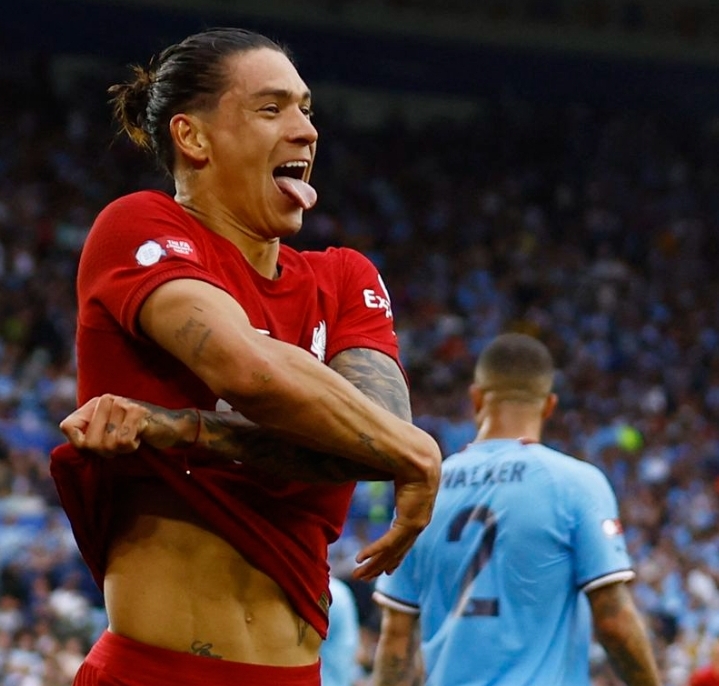 English champions City started their big close-season signing, Norway’s Erling Haaland but, in contrast to Nunez, he had a disappointing debut, missing several chances and struggling to combine with his new team mates.

However, another new City face — Argentine forward Julian Alvarez – found the target after coming on in the second half.

Trent Alexander-Arnold had opened the scoring, firing Juergen Klopp’s Liverpool side ahead in the 21st minute of the 100th edition of the annual clash between the league champions and FA Cup winners

Liverpool’s new striker Darwin Nunez scored a late goal on his debut as they drew first blood in this season’s rivalry with Manchester City after a 3-1 win in Saturday’s Community Shield.

The Uruguayan, bought from Benfica for an initial fee of 75 million euros ($76.64 million), made himself an instant fan favourite after capping a lively appearance off the bench with a stoppage time goal to secure the first trophy of the season.

Thiago Alcantara floated the ball to Mohamed Salah on the right and the Egyptian laid it back to Alexander-Arnold whose first time shot curled into the far corner.

Haaland, brought in from Borussia Dortmund, missed two first half chances to mark his City debut with a goal but Pep Guardiola’s side were missing their usual fluency.

The effort was initially ruled out for offside but a VAR review overturned the decision although the technology was soon to work against Guardiola’s side.

Referee Craig Pawson went to the monitor before ruling that City defender Ruben Dias had handled at close range from a Nunez header and Mohamed Salah drilled home the penalty to restore Liverpool’s lead in the 83rd minute.

Nunez then capped an eventful appearance from the bench, scoring with an angled header after Andy Robertson had nodded the ball into his path.

It was another new striking addition who brought City level in the 70th minute when Phil Foden’s shot was parried by Adrian and with the ball spilling loose, former River Plate forward Alvarez pounced to net his first goal for the club.