Ninety-one people, a village of heroes in Cyprus 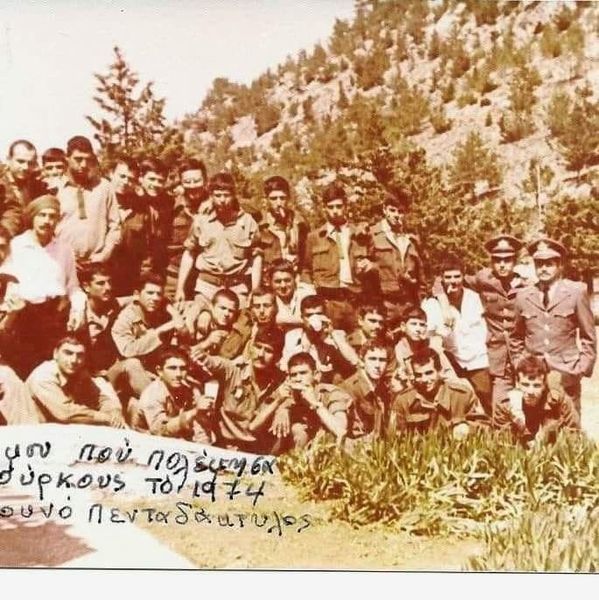 That’s the number of soldiers of the 361st Infantry Battalion who fell defending our Cyprus at “White Peak” area (Aspri Mouti), when their Command and officers abandoned it!
“Despite the truce, the Battalion never stopped fighting”
Testimony of AKEL militant Kostas Mosfiliotis, one of the soldiers from the 361st Infantry Battalion that managed to survive, about the betrayal committed in 1974. The overwhelming majority of the Battalion’s soldiers were composed of comrades from AKEL and our people’s movement, democratic youth and Makarios supporters, which is precisely why they were assigned to the frontline, to the closest point of contact.
“Ninety-one people perished, an entire village of heroes. Ninety-one people, innocent, pure and untarnished. They all left us with a big question looming “why?” – there was no one to cry for them in the mountains and gorges of the Pentadaktylos mountain range.” Another moving piece of yet another emotive testimony, as recalled to “Haravgi” by one of the soldiers of the 361st Infantry Battalion who survived comrade Kostas Mosfiliotis. He recounts:
“The history of the 361 Infantry Battalion, or rather the Battalion of the “White Peak”, was in fact a place of exile for those who had specific political beliefs (leftist – Makarios supporters) of those who served their time in the army in the period of 1974. At least the majority. The Battalion, based at the village of Sychari Kyrenia, had the 1st Company stationed at Dikomo, the 2nd Company at “White Peak” and half of the 3rd Company at Mia Milia and the rest of the Reservist force at Ayios Savvas which controlled the eastern sector, the enclave of Kioneli – Nicosia.
During the first round of the invasion, on 20 July, the soldiers of our Battalion with the meagre means at their disposal held out for three days, fighting heroically for the territories they vowed to defend.
Anti-aircraft weapons without any anti-aircraft fire. Tanks without anti-tank guns. We were fighting an army with modern weapons with Second World War Martini-Henri rifles. And yet the soldiers of the Battalion fought with their souls, knowing that everything was betrayed.
The 361st Infantry Battalion fought fierce battles and suffered many casualties at the “White Peak” and Koutsoventi. It is worth mentioning that despite the truce that had been agreed, the Battalion did not stop fighting for a single minute.
On the night of 12 August, the Battalion relieved the 241st Battalion in the Klepinis-Pachyammou area.
On the morning of 14 August, the 361st came under heavy fire from land, sea and air and the Turkish army made furious efforts to advance.
The Battalion responded with the meagre means at its disposal and as a result, until the afternoon hours when the order to retreat was given, the Turkish army achieved nothing. The soldiers, together with their officers, moved towards the village of Klepini, where the Command of the Unit was meant to be stationed, but we were surprised to find that it was absent, given that it had abandoned the battlefield and the soldiers from the early hours of the morning. The Turkish army surrounded the Battalion and from that hour onwards the disorderly retreat began, and it was every man for himself. The soldiers of the 361st, divided into small groups, were trying to reach the free areas under the control of the Republic on their own, given that their Commanders had abandoned them.
Each surviving soldier has his own harrowing testimony of what he went through. The 361st Battalion would pay a heavy price, the heaviest price.
If we could ask the soldiers of the 361st Infantry Battalion, both dead and alive, about how they could express in a single word what feelings the whole betrayal had on them, the answer would be simple and noteworthy: we were ABANDONED BY THE COMMANDERS.”