Melani, the black flamingo is back at Akrotiri 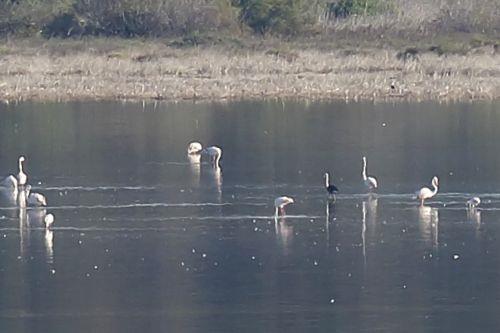 Melani, a rare black female flamingo has returned to the Akrotiri Salt Lake for the fifth time in seven years, a British Bases press release said.

The flamingo, which suffers from ‘melanism’, a genetic irregularity which turns it a dark brown or black, had caused a media storm all over the world when it first arrived in 2015.

Thomas Hadjikyriakou, the Akrotiri Environmental Education Centre (AEEC) manager, said he was thrilled to see the flamingo return again this year, on her 10th birthday.

“Very few people had ever been fortunate enough to lay eyes on her in the past, so for her to return again, on her 10th birthday, and seeing she is doing well is wonderful,” he said.

Her return, he added, “means that more people can enjoy this wonderful site and, of course, we are all very excited because of it, as it’s the only flamingo of its kind in the world and very little is known about it.”

Hadjikyriakou warned however, that people should not try to go near the bird or walk into the lake as it could disrupt its habitat.

Every year the flamingos flock to the salt lake to feed off of brine shrimps and Plankton, with many of them staying all-year round if the conditions remain perfect.

“The flamingos usually stay between October and February but there is no way of telling how long the black flamingo will stay for. My advice would be to take the opportunity to see it now, because we cannot be sure it will be back again next year, although it does seem to like it here.”

Those who wish to see the bird can visit the Akrotiri Environmental Education Centre.