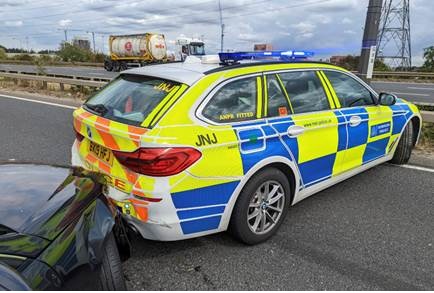 A man has been arrested after a police car was deliberately rammed by a stolen car.

The incident began at around 07:55hrs on Wednesday, 27 July in Trader Road, E6

A woman in her mid-60s reported she had been pulled from her car, an Audi A3, by two men and her car stolen.

The woman had suffered minor injuries during the robbery.

The car was circulated as stolen and was seen by local officers at around 08:42hrs the same day in Wennington Road, Rainham.

The car appeared to be in convoy with a Mercedes car but this peeled off shortly after the pursuit began.

A police pursuit of the Audi was authorised and was taken over by Tactical Pursuit trained officers.

While in the course of the pursuit on Marsh Way, Rainham, the Mercedes that had been seen earlier returned and rammed one of the pursuing police cars into the central barrier.

The two officers in the car received minor injuries and were later treated and then discharged from hospital.

Two police vehicles were damaged during the incident.

The Audi made off and was later found abandoned nearby.

The driver of the Mercedes ran off from the scene, but was chased and arrested by officers.

The Mercedes was subsequently found to have also been stolen in Essex earlier in day.

There were no other reported injuries.

The road was closed while emergency services dealt with the collision, it has now reopened.

Inspector Richard Wenham of the Met’s Road and Transport Policing Command, said: “Officers have done their job and quickly circulated and located a stolen car. Professionally trained officers have then taken over the pursuit and their car was rammed in a desperate attempt by the suspects to get away. Both officers were injured, but thankfully not seriously. This incident shows our commitment to arrest those engaged in criminality and the risks officers can face when they do their duty. This sort courage and dedication by officers goes on every day in London and it deserves to be recognised.”

Any witnesses or anyone with any information is asked to call police on 101 or contact via Twitter @MetCC. CAD 1694/27JUL

To give information anonymously contact Crimestoppers on 0800 555 111 or online at crimestoppers-uk.org. 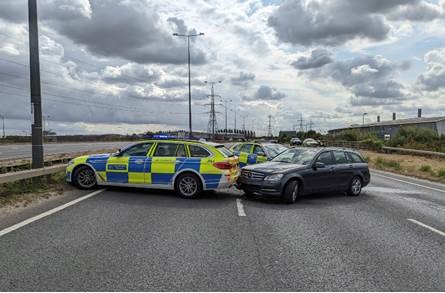