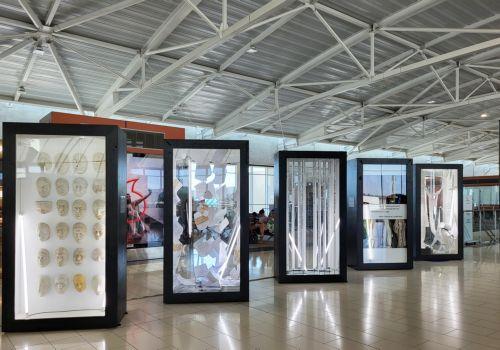 Larnaka Airport hosts an exhibition on the 50 years since the establishment of the Cyprus Theatre Organisation (THOC), a press release by Hermes Airports reads.

According to the press release, ten displays have been placed at the Departures Area of Larnaka Airport, exhibiting the valuable material by THOC, to the thousands of passengers travelling daily through the airport. It is further added that the art exhibition includes theatrical costume props, reviews and play posters, 3D models for set designs and other props, which are an integral part of the history of Cyprus theatre.

It is noted that the curators Elena Kotasvili and Alexis Vagianos gathered material from the archive of THOC for the creation of this exhibition, with a focus on the unseen aspect of theatre. At the same time, they emphasise on the preparation process of a theatre production, for which an array of objects lead to artistic creativity.

Antigone Papaphilippou, Chairwoman of the Board of Directors of THOC, stated that “THOC is celebrating half a century of existence with a significant exhibition, which includes rare material from its archive, that is displayed for the first time for public viewing. Larnaka airport is the ideal space to host the exhibition, giving passengers the opportunity to have a closer look, behind the scenes”.

Maria Kouroupi, Senior Manager of Aviation Development and Communication of Hermes Airports, said “At Hermes Airports we always support culture through our Sense of Place project, with the aim to highlight elements that can be found on the island, through installations placed at the airports.”

In our opinion, she added, “exhibiting art in public spaces is the most immediate way for art to be enjoyed by everyone.”

The exhibition will be hosted at Larnaka Airport until the end of September 2022, the press release concludes.