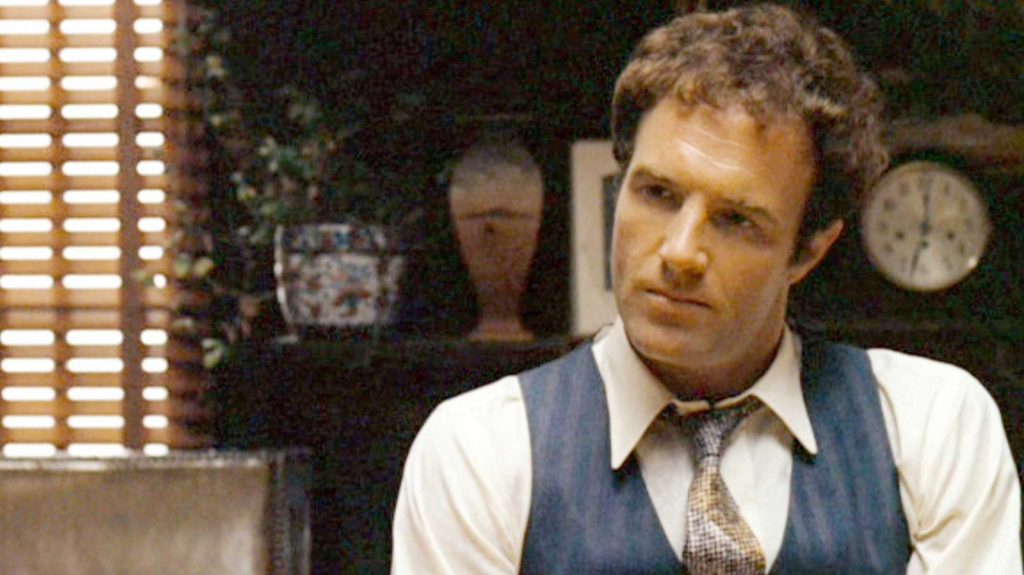 Classic Scene – The Godfather
The Godfather has been shot but survives. Sonny (James Caan), Michael (Al Pacino), Tom (Robert Duvall), Clemenza and Tessio sitting in the Don’s study discussing what to do.
Hagen: I found out about this Captain McCluskey who broke Mike’s jaw.
Sonny: What about ‘im?
Hagen: Well, he’s definitely on Sollozzo’s payroll, and for big money. See? Now McCluskey has agreed to be the Turk’s bodyguard. What you have to understand, Sonny, is that while Sollozzo is being guarded like this, he is invulnerable. Now nobody has ever gunned down a New York police captain. Never. It would be disastrous. All the Five Families would come after you, Sonny. The Corleone Family would be outcasts! Even the old man’s political protection would run for cover! So do me a favour – take this into consideration.
Sonny: All right. We’ll wait.
Michael: We can’t wait.
Sonny: What?
Michael: We can’t wait. I don’t care what Sollozzo says about a deal, he’s gonna kill Pop, that’s it. That’s the key for ‘im. Gotta get Sollozzo.
Clemenza: Mike is right.
Sonny: Lemme ask you somethin’….What about this McCluskey? Huh? What do we do with this cop here?
Michael: They want to have a meeting with me, right? It will be me, McCluskey, and Sollozzo. Let’s set the meeting. Get our informers to find out where it’s gonna be held. Now we insist it’s a public place – a bar, a restaurant – some place where’s there’s people so I feel safe. They’re gonna search me when I first meet them, right? So I can’t have a weapon on me then. But if Clemenza can figure a way to have a weapon planted there for me. Then I’ll kill ‘em both.
Everyone is astonished; they all look at Michael. Silence. Clemenza suddenly breaks out in laughter. Sonny and Tessio join in; only Hagen is serious.
Sonny walks over to Michael, leaning in.
Sonny: Hey, whataya gonna do, nice college boy, eh? Didn’t want to get mixed up in the family business, huh? Now you wanna gun down a police captain. Why? Because he slapped ya in the face a little bit? Hah? What do you think this is the army, where you shoot ’em a mile away? You’ve gotta get up close like this and bada-bing. you blow their brains all over your nice Ivy League suit. C’mere…

El Dorado (1966) – Caan took third billing to such Hollywood heavyweights as John Wayne and Robert Mitchum in the highly-acclaimed western.

The Godfather (1972) – James Caan earned the sole Oscar nomination of his career for his explosive turn as Sonny Corleone.

The Gambler (1974) – “Hit me” is how you ask for another card in 21, and that suits the endless masochism of Caan’s table game addict.

Rollerball (1975) – Long before The Hunger Games and Squid Game, Rollerball offers a dystopian take on the world in 2018, with Caan’s Rollerball player having to fight to the death.

Thief (1981) – Michael Mann made his narrative feature film debut with Thief, starring Caan in the title role. Caan plays Frank, a hot-shot safecracker and jewel thief who vows one last job before going on the straight and narrow.

Misery (1990) – Directed by Rob Reiner and based on Stephen King’s novel, Misery is a terrifying two-hander for which Kathy Bates won Best Leading Actress at the Oscars.

Honeymoon in Vegas (1992) – Caan had fun with his gangster image in this romantic comedy. He stars as gambler Tommy, who tries to steal PI Jack’s (Nicholas Cage) girlfriend (Sarah Jessica Parker) because she reminds him of his late wife.

Elf (2003) – The story of Buddy the oversized elf (Will Ferrell), who leaves the North Pole and meets his real father, Walter, played by Caan at his crotchety best.

Source: thetimes.co.uk
Photo: Caan as Sonny in The Godfather (1972)