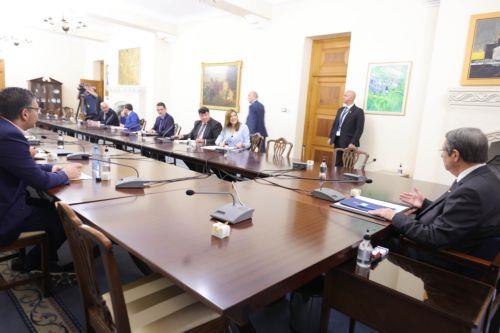 The government took a series of decisions aiming at breaking Cyprus’ reliance on fossil fuels.

President of the Republic Nicos Anastasiades discussed the issue of the rising energy prices with the Ministers of Finance Constantinos Petrides, Minister of Energy Natasa Pilidou, Undersecretary to the President Petros Demetriou, with representatives of the Cyprus Energy Regulatory Authority (CERA), the Cyprus Electricity Authority of Cyprus (EAC) and other officials.

In a writer statement issued after the meeting, Government Spokesman Marios Pelekanos said the EAC’s investment activities will be expedited with a view to upgrading its grid network rendering cooperation with all involved actors more efficient and flexible.

It was also agreed to increase the EAC’s staff with a view to expediting the upgrade of its grid.

Furthermore, in the context of green transition policies’ the government decided to utilise €80 million from EU funds on investments in large energy storage systems.

“These measures will allow the faster introduction of renewables in Cyprus’ energy mix presenting environmental and economic benefits,” the Spokesman added.

Moreover, the Spokesman said that the Ministry of Energy and CERA will assess the possibility of imposing taxation or a levy on increased profits generated by renewable energy producers.

The meeting also decided to evaluate new measures following the expiry of the current measures on August 31 (5% VAT on electricity bills for vulnerable households and 9% for other retail consumers), including the introduction of vouchers to tackle energy poverty for vulnerable households, according to the EU’s toolbox, which provided guidelines to alleviate consumers from price hikes.

With regard to the increasing of the EAC’s share of renewables, the meeting decided to draft an action plan by operators of the transmission and distribution systems which will be submitted to the regulator (CERA) for approval.

“The aim is to chart a sustainable plan for the participation of EAC in renewable energy,” the statement added.

The meeting also decided to launch an information campaign for saving energy.

The statement added that this year’s budget for energy upgrading of household and corporations is close to €100 million.