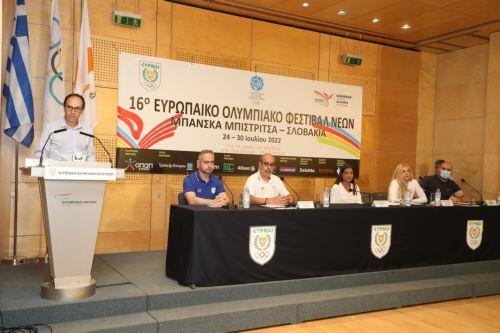 A 27-athlete mission is participating in the XVI Summer European Youth Olympic Festival (EYOF) that will be held in Banská Bystrica, Slovakia from 24 to 30 July 2022.

Around 2.5 thousand athletes from 48 countries are taking part in the Festival.

During a press conference on Thursday, chairman of the Cyprus Olympic Committee, George Chrysostomou said the games are the biggest multi-competition event for young people. He also expressed hope that Cypriot athletes will once again honour Cyprus overseas.

Cyprus is participating with 27 athletes in seven from the eleven sports including tennis, gymnastics, swimming, badminton, cycling, track and field and judo.

The opening ceremony will be held on Saturday, 23 July near the SNP (Slovak National Uprising) Memorial, park and will be broadcast live on the Slovak national TV. All athletes will return home on Sunday, 31st July.