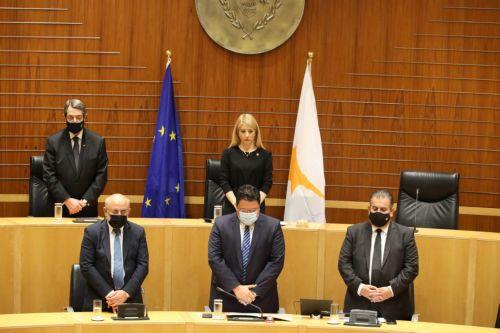 The Plenary of Cyprus’ House of Representatives on Friday held a special session to mark the 48th anniversaries of the Coup by the Greek Junta against President Makarios on July 15, 1974 and the ensuing Turkish invasion five days later.

The special session, that honoured the memories of those fallen in defence of democracy, was also attended by President Nicos Anastasiades and members of the Council of Ministers.

House President, Annita Demetriou, in her speech, said that constant struggle for the freedom and reunification of Cyprus as well as for full respect of the human rights of all the country’s legal residents was imperative, while she called for unity in the efforts to project “our just demands.”

The House of Representatives, she added, will not stop fighting, making the most of every European and international forum available, through the strengthening of bilateral and multilateral relations, but also the strengthening of parliamentary diplomacy, and, at the same time calling on the European Union to take a more active role in the process of resolving the Cyprus issue, “so that Cyprus is not the only European state under occupation.”

Demetriou referred to Turkey’s daily efforts for new faits accomplis at sea and on the ground, and said that Ankara, violating the principles of international and European law, “continues its provocative behaviour” by violating Cyprus’ exclusive economic zone, and usurping basic and inalienable rights.

She also referred to Ankara’s “illegal actions aimed at the complete settlement of the fenced area of Famagusta, the creation of a military and naval base in occupied Karpasia, the annexation of our occupied territories.”

Demetriou said that the Turkish President “uses as permanent policy, a rhetoric of discord” while he promotes, in full coordination with the Turkish Cypriot leadership, a two-state solution based on sovereign equality, “not showing the slightest will to find a viable solution to the Cyprus problem, nor the continuation of any effort, since the confidence-building measures proposed by the President of the Republic were, a priori rejected.”

“A viable solution is the solution that will meet the expectations of our people, Greek Cypriots, Turkish Cypriots, Armenians, Maronites and Latins,” she said.

Demetriou also said that the Parliament and the State “will not tire of condemning the twin crime of the summer of 1974 against Cyprus, the continued Turkish occupation and the intensifying expansionist policy of Ankara, as well as the attempt to create new faits accomplis both on the ground and in the negotiations context.”

Addressing President Anastasiades, she said that “this constitutes our self-evident obligation, as political leadership.”

Demetriou emphasised that “the world around us is changing and we must change with it,” adding that it was necessary to “modernise our political discourse, free ourselves from divisive tactics” and expediencies and by creating prospects and give hope to the country’s children.

Political leaders, in their speeches condemned the coup and the ensuing Turkish invasion, and referred to the Cyprus problem.

Leader of ruling DISY, Averof Neophytou, in his speech, said that the Greek Cypriots’ efforts for a viable and sustainable solution to the Cyprus problem, within the agreed framework of a bizonal bicommunal federation, without occupying armies and foreign guarantors must be continuous. He expressed his party’s support for the efforts of President Anastasiades.

AKEL’s General-Secretary, Stefanos Stefanou, said that it was necessary to leave aside illusions, “abandon populism” and, “with a great sense of responsibility, reflect on what uncharted waters we are entering with the partition being consolidated.” He said that the political leadership must realise the great dangers of the island’s partition.

Leader of DIKO, Nikolas Papadopoulos said that all of Cyprus’ struggles were of resistance “against slavery, colonialism, fascism and the occupation,” and that the struggle to save the Republic of Cyprus continues.

EDEK leader, Marinos Sizopoulos, said the new geostrategic state of affairs dictates a review of the tactic followed, to effectively deal with Turkey’s expansionist policy, adding that the continuation of a tactic that proved ineffective for 48 years, and transformed the Cyprus issue from an international problem of invasion and occupation to a matter of intercommunal settlement, will not bring the solution any closer.

Chairman of DEPA, Marios Garoyian, said that the time has come to comprehend the national dangers and tackle them collectively, “or succumb to our fate” and be lost in the depths of history.

Charalambos Theopemptou, leader of the Cyprus Greens-Citizens Cooperation, in his own speech, referred to the “ugly and divisive climate” within society at the time of the coup and the invasion. He said a coup took place, followed by the Turkish invasion, leading to the displacement of 200,000 people, without anyone being punished for all this.

ELAM MP, Linos Papayiannis, said that, in recent years, Turkey has been implementing a multi-level strategy, which directly threatens the territorial integrity and sovereign rights of Cyprus, and called on the government to proceed with the immediate closing of the crossings, to demand sanctions against Turkey similar to those imposed on Russia and to proceed with the deportation of all irregular migrants.

The coup staged by the Athens junta against the elected government of President Makarios served Turkey as a pretext to impose its partitionist plans against Cyprus. On July 20, 1974, Turkey invaded Cyprus, and occupied its northern third. Repeated rounds of UN-led peace talks have so far failed to yield results.