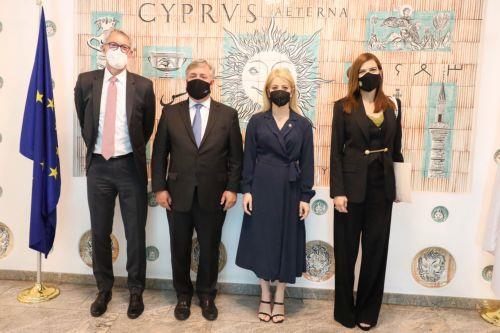 The Minister of Energy, Commerce and Industry Natasa Pilides announced on Thursday that development of the Aphrodite field in Cyprus’ exclusive economic zone will continue with an additional offshore drilling taking place in the first quarter of 2023.

The anouncement was mede following a meeting, in Parliament, with the President of the House of Representatives Anita Demetriou and the President of Chevron Middle East, Africa, South America Exploration and Production Company, Clay Neff.

According to Pilides, this will be an appraisal well to establish of the exact quantities of the deposit, but the drilling will also be used at a later stage to develop the field.

In addition, the Energy Minister said that she had the opportunity to discuss with the American company representative the various options under consideration for the transportation of natural gas to Egypt, explaining that the initial six scenarios have now been reduced to four, while by the end of the year the two sides are expected to come up with the final option which will be examined by the Ministry’s Hydrocarbons Service in order to be approved for implementation.

According to Pilides, changes in the global scene following Russia’s invasion of Ukraine were also discussed, as well as the possibility of accelerating Cyprus’ participation as a partner in Israel and Egypt’s efforts to supply the European Union.

On behalf of Chevron, Neff said that he had a very good meeting with the Minister and was able to provide her with an update on the Aphrodite project and informed her about Chevron’s plan to continue with drilling activities in the coming months, adding that the company is working on development alternatives and is going to be narrowing down the preferred one in the coming months as well.

“I just want to say how important Cyprus is to Chevron and the Eastern Mediterranean region. We believe that the Aphrodite project can play a key role, providing additional gas supplies to the region and we look forward to working with our partners, as well as Minister Pilides and her team as we continue to make progress on Aphrodite project. We believe that this project will provide very important natural gas supplies to the region and the world. It is so critical that we have affordable, reliable energy and we believe that Aphrodite will contribute to that in the future”, he said.

Asked about possible developments regarding the Ishai field in Israel, the Energy Minister said that communication between the relevant ministries of the two countries is progressing, with the Cypriot side recently receiving some additional information regarding the expert who will act on behalf of the two governments.

Asked about the “Glafkos” field and the fact that there is still no indication from Exxon Mobil about the exact quantities, the Minister said additional seismic surveys have been planned and all the relevant permits have been granted so that the exploration vessel can start its work in the next few days, which is expected to be completed within the next three months. “It is a process that unfortunately takes time, but it is important because it could potentially add to the findings,” she added.

Asked what are the four options that are currently being considered for the transportation of gas to Egypt, Pilides replied that due to specific confidentiality agreements she could not expand in detail, however she said the scenarios foresee either the interconnection of the Aphrodite field with existing infrastructure in the region, or a solution specifically related to the interconnection of Aphrodite with Idku.

Asked about the exact timeframe for the new drilling, the Minister replied that the plan is to start the process in the first quarter of 2023, while regarding the next milestones for the final investment decision, she said that these remain as defined in the relevant contract. “We are trying to work on the faster implementation of these milestones because they provide some flexibility, but we will do our best to take advantage of the opportunities we see now with the rising prices and the green transition at the European level,” she added.

Asked whether she got a sense from Chevron that they are trying to expedite the process given the great demand for gas and alternative sources of energy, Pilides said that already during COVID there was a climate of uncertainty regarding both the circumstances through which drilling and various activities could be done, but also the future of the market.

“Now there is a much clearer view, we also discussed that we had some very positive feedback from the EU and the Energy Commissioner who has reaffirmed that as a bridge fuel, natural gas can play a role until 2050, a very important confirmation for us because it gives companies a more reliable timeframe so that they know that the project is definitely viable. As a result, there is willingness to expedite and certainly we have made a lot of progress in the last months. What we agreed today was that we need to have the agreed development plan ready by the end of the year-beginning of next year. We are definitely looking for the submission of that proposed plan in the final months of 2022 so that we can appraise it and put it in place. Once that is done we can proceed with the marketing discussions, because that is a key point in firming up the timeline of when the gas is going to be available”, she explained.

In response to another question regarding American press reports about a second appraisal well in “Glafkos” by Exxon Mobil within 2023, as well as the Minister’s earlier statements about new seismic surveys in the field and whether the data on the results of the surveys in Block 5 will be clarified, Pilides said that Block 5 comes to complete the quantities and to open up potentially much greater prospects regarding Block 10.

“Certainly the seismic studies that will be done in the next period are of great importance to clarify how the company will proceed. It may not be necessary to drill an appraisal well for Block 10, depending on the results of the seismic studies. Certainly in the next few years some drilling will be required, possibly on Block 5 rather than 10,” she added.

Asked finally whether there are discussions to combine the development of Aphrodite with that of Leviathan, Pilides said that the stand-alone option for Aphrodite remains on the table as included in the initial development plan, however the Leviathan option has also been discussed.

“It will all depend on the final act that we will be presented with in the final quarter of the year. What’s important for us and for Chevron is to identify the quickest and most beneficial option for both parties”, she concluded.

Moreover, according to a joint statement by the Ministry of Energy, Trade and Industry and Chevron after the end of the meeting in Parliament, the two sides affirm their mutually beneficial cooperation in viably and efficiently developing the “Aphrodite” field, in the Republic’s Exclusive Economic Zone, adding that, taking into account the prevailing energy environment and the potential for Cyprus and the wider Eastern Mediterranean to significantly contribute to Europe’s security of supply and diversification of sources, both parties remain committed to continue working together in order to expedite the timing of first gas from “Aphrodite” to Egypt and to European markets.