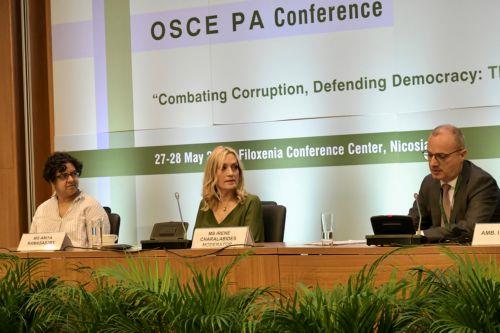 Cyprus and Greece’s delegations to the Parliamentary Assembly of OSCE deplored statements by Turkey as regards the legality of the so called “Turkish republic of northern Cyprus”.

A press release by the Cyprus parliament says that Head of the Cyprus delegation and Vice president of OSCE Irene Charalambides referred to the provocations by Turkey in the fenced off city of Varosha. Upon her statements, members of the Turkish delegation claimed that only “trnc”, as they call the Turkish occupied areas of the island, is responsible to make decisions as regards the status of Varosha.

Charalambides and Cyprus MP Christos Senekkis as well as members of the Greek delegation criticized the Turkish statements pointing out that “trnc” is an illegal entity and is not recognized by any state or international organization, except Turkey. They said that the only legal state on the island is the Cyprus Republic which is under occupation by Turkish forces since 1974.

During the deliberations at the Committee of Political affairs and security Charalambides referred to the Ukrainian crisis pointing out that the support to Ukrainian’s sovereignty and territorial integrity is not disputable.

She said that Cyprus has hosted a big number of Ukrainian refugees and referred to Cyprus’ support to sanctions against Russia and to Ukrainian’s EU potential.

Cyprus MP also said that some countries appear to denounce the Russian aggressive behavior but wish to also remain neutral as regards the sanctions. She also referred to all the geopolitical developments in EU and EU’s security and defense as well the situation in the eastern Mediterranean and the Aegean sea.

Cyprus has been divided since 1974, when Turkey invaded and occupied its northern third. Varosha, the fenced off section of the Turkish occupied town of Famagusta, is often described as a ‘ghost town’.