Cypriot teams do well in Europe 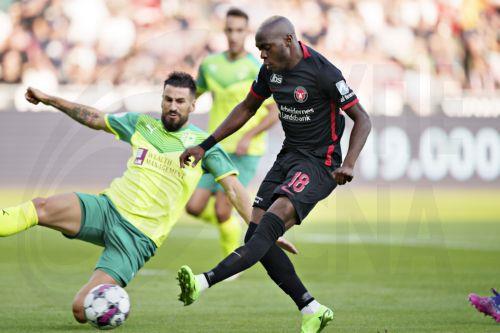 On Wednesday, AEK Larnaca travelled to Denmark to take on FC Midtjylland at the MCH Arena in Herning for their UEFA Champions League Second qualifying round 1 fixture.

The Danes led an all-out attack on the Larnaca goal – the statisticians counted 30 shots on goal of which five were on target. The Cypriots had six shots on goal and only one on target, but it was the one that counted when Ádám Gyurscó found the net in the 81st minute. Erik Sviatchenko rewarded Danish effort when he equalized three minutes later.

AEK Larnaca will play hosts in the second leg at 1.30am (AEST) Wednesday, 27 July

Meanwhile in the first leg of their Europa Conference League Second qualifying round, Botev Plovdiv hosted APOEL to a goalless draw early on Thursday (AEST). The Bulgarian team will travel to Nicosia to play the second-leg match at 3am (AEST) on Friday, July 29.

Aris Limassol had a better time of it in their Europa Conference League fixture against Neftçi PFK from Azeribaijan on their home ground at the AEK Arena-George Karapatakis in Larnaca.

Caju drew first blood in the 53rd minute for Aris Limassol. Yannick Arthur Gomis added the second 13 minutes later. To give them a comfortable cushion for their round-two match next Friday (3am AEST), 29 July in Baku.