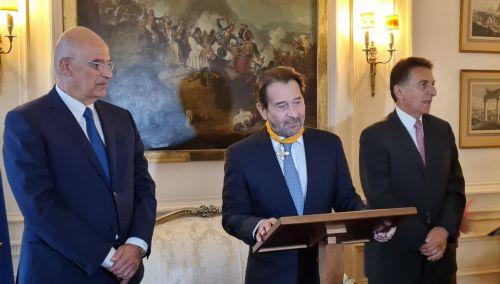 Kypros Nicolaides, the UK Cypriot pioneer Professor in Fetal Medicine at King’s College London, has been presented with Greece’s Gold Medal of the Order of the Phoenix by Foreign Minister Nikos Dendias.

The medal award ceremony, on behalf of the President of the Hellenic Republic Aikaterini Sakellaropoulou, took place on Friday evening at the Greek Ambassador’s London residence, in the presence of Professor Nicolaides’s family.

Dr Nicolaides has been dubbed “the miracle worker” for his scientific breakthroughs in fetal medicine, more specifically in early screening during pregnancy and in methods of fetal therapy.

He is the founder and chairman of the Fetal Medicine Institute, set up in 1995, which has been funding and supporting research and training of doctors from around the world.

The honour bestowed upon him by the state of Greece came as recognition of both his scientific and his charity work, as the Greek Foreign Minister said.

Dendias added that it was his honour to award the medal to such a celebrated member of the Greek diaspora, noting that women’s and children’s health is one of the priorities of Greece’s four-year (2022-2025) National Programme of International Development Cooperation, also known as Hellenic Aid.

He stressed the importance that his Ministry attributes to the synergy with Dr Nicolaides’s Fetal Medicine Institute, in the framework of Hellenic Aid, with the aim to provide a fetal medicine training programme to eight countries in the Western Balkans, Eastern Europe and Eastern Africa.

The programme includes the opening of fetal medicine units in public hospitals in these countries, as well as offering the opportunity to local doctors to study for a Master’s degree and have their practice at the Fetal Medicine Institution at King’s College.

Foreign Minister Dendias also said in his speech that “hundreds of thousands if not millions of children owe their life to Professor Nicolaides.”

Nicolaides, visibly moved, expressed his pride at receiving the medal. “I accept this honour as a recognition by the Greek state of the work carried out by doctors who do not accept the tragic reality of a woman dying every minute across the world due to pregnancy or labour complications, deaths that could be averted in their vast majority,” said the Professor.

The Foreign Minister noted that the Greek flag will be placed outside the fetal medicine units that will be founded in those countries, “as a testament to the contribution made by our country and Kypros Nicolaides to the global community.”

Professor Nicolaides added: “I look forward to my collaboration with the Greek Foreign Ministry so that I can achieve what I have desired for many years, to transfer the results of our research to as many countries as possible, for the benefit of women
and children.”

Last July Professor Kypros Nicolaides was awarded Cyprus’s Grand Cross of the Order of Makarios III by the President of the Republic of Cyprus Nicos Anastasiades.