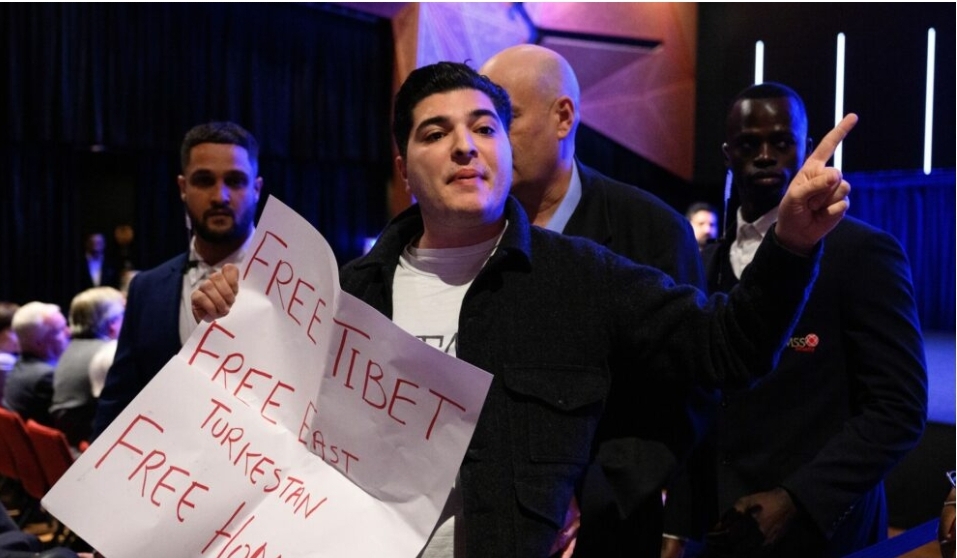 Outspoken critic of the Chinese government, Drew Pavlou, was detained and subsequently released by Metropolitan Police in London over an alleged bomb threat.

While protesting outside the Chinese embassy, the Greek Australian activist was attempting to glue his hand and the Taiwanese flag on the gate.

Twenty minutes into the protest he was arrested for allegedly sending a fake bomb threat to the embassy in an email.

According to Mr Pavlou, 23, the email over which the Chinese embassy filed a report read: : “This is Drew Pavlou you have until 12pm to stop the Uyghur Genocide or I blow up the embassy with a bomb regards Drew.”

Mr Pavlou has denied sending the email and claims he was “peacefully protesting” outside the embassy building.

London Metropolitan Police issued a statement confirming the arrest of a man on suspicion of trespassing on diplomatic premises, communicating a fake bomb threat and criminal damage.

Authorities said that the man arrested – not identified by name – was offered legal advice, but Mr Pavlou said he was denied the right to speak to a lawyer for hours as well as access to consular assistance.

Mr Pavlou also claims he was threatened with arrest at the border should he try to return to Australia.

A Department of Foreign Affairs and Trade (DFAT) spokesperson said they will address Mr Pavlou’s allegation.

“Officials from Australia’s High Commission in London will raise Mr Pavlou’s claim that he was denied consular access before being released with UK authorities,” the DFAT spokesperson said.

“Owing to our privacy obligations, we cannot provide further details.”

Mr Pavlou was detained for almost 24 hours and released the next day. He says his passport was returned to him but that he was strongly recommended to stay in the UK until 14 August, the date he is required to attend a police station.