Australian Cypriot a prisoner of war in 1974 Cyprus 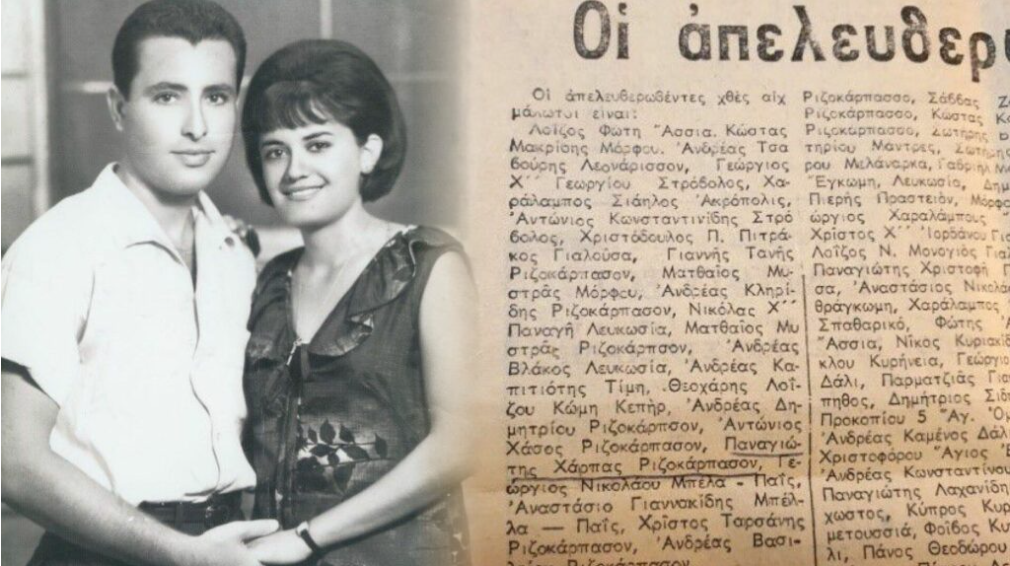 My pappou, a prisoner of war
The Turkish army made the Greek-Cypriot men enter the busses. They took my grandfather Panayiotis. My Yiayia wasn’t allowed to say goodbye.

(L-R) Panayiotis and Ellatha Harpas. The 1974 newspaper that printed my Pappou’s release as a prisoner of war. Photo: Supplied

In the summer of July 1974, Turkey invaded Cyprus. My grandfather Panayiotis Harpas was aged 35 and my grandmother Ellatha Harpas was only 29 years old. That summer would changed the course of their lives forever.

Yiayia and Pappou had taken their children Androulla my mother aged eight and her brother Yiannis aged six to the family holiday house in Rizokarpaso to enjoy the beach.

Suddenly, my grandfather heard unfamiliar noises at the house and went outside to investigate. Turkish army tanks were rolling over the hills in the distance. He ran inside to warn Yiayia.

Hundreds of Turkish soldiers were on the streets within minutes. They came to Yiayia and Pappou’s house threatened them with guns and ordered them outside.

The Turkish army collected Greek-Cypriots and forced them to the village church. In the middle of summer and temperatures reached 40 degrees Celsius. “They made us wait outside in the blazing sun, for 4 hours so they could steal things from our homes; radios, food and money. The heat of the sun was excruciating. We went back to our home and it was ransacked,” my Yiayia would relay.

The Turks repeated this every second day. The mood of the village was one of fear. After the third time the Turkish soldiers sent the women and children home and kept the men, some were kids aged 15-16 years old.

The Turkish army made the Greek-Cypriot men enter the busses. They took my grandfather Panayiotis. My Yiayia wasn’t allowed to say goodbye.

Pappou was forced to board a ship to Adana in Turkey, as a prisoner of war and was held there for one month with all the other men from Rizokarpaso. They were beaten and hit with the back of their guns if they didn’t comply to orders. To use the bathroom they had to go on the floor in the corner of the room.

Each day my grandfather was given a small piece of bread and a couple of olives to eat, if he was lucky. Sometimes he got a spoonful of slop of mashed discarded restaurant food. My grandfather wore the same clothes for a month. He was dirty, starved and scared.

Yiayia was left in Cyprus with two children to care for. Yiayia’s radio had been stolen, so she was unable to hear the news each day.

She would go to a neighbour’s house who had hidden a radio from the invading soldiers. They would listen to any news they could. It was nearing a month that Pappou was taken.

Cyprus and Turkey negotiated the release of some prisoners. The first to be released were teenagers. The second, priests and the third, teachers. Pappou was a teacher.

To prove the prisoners were still alive, each individual was to say their own name over the radio.

Yiayia listened and she says the seconds felt like an eternity, she heard Pappou’s voice. She was elated, and my mum and uncle Yiannis jumped with excitement.

Pappou returned to Cyprus underweight and dishevelled, desperate to find his wife and children. He had no clue of their whereabouts.

Thanks to the Red Cross and the Cypriot government, Pappou reunited with his family in the south of Cyprus. That was when he decided to leave the island. My grandparents didn’t know if the Turkish army would move south to their new location.

Pre-war Yiayia and Pappou had no intention of leaving. The invasion destroyed their home, extended family, friends, community, and way of life.

Pappou had a brother who had migrated to Adelaide, Australia. My family bordered a flight to Australia and left for Adelaide as refugees with no possessions, except for the clothes on their back.

In Australia, like any new environment, there took time to adjust. They found safety but met new challenges in their attempt to rebuild their lives. Pappou painted trains to earn money. He hated the job. His teaching degree wasn’t recognised so he undertook a bridging qualification.

The 1974 newspaper that printed my Pappou’s release as a prisoner of war. Photo: Supplied
The students in Cyprus respected teachers whereas Australian students weren’t interested in learning Greek and made fun of his accent. He felt professionally unfulfilled and retired as soon as he was eligible.

His found solace in his garden where he grew artichokes, figs and plums. He was a generous man. My fondest childhood memories are parties my grandparents threw for their friends and family; full of music and laughter. Pappou would proudly light his outdoor fourno and serve us lamb.

Despite a happy retirement he missed his ancestral homeland. The war took its toll on my grandparents. Their mental health was compromised at times but they always persevered.

Yiayia and Pappou volunteered for the Arts and Culture committee of the Cyprus Community of South Australia. They’d attend commemorative days to raise awareness for the Cyprus issue.

48 years after the Turkish invasion of Cyprus, Turkish settlers squat in Yiayia and Pappou’s properties, their home in Trikomo and their holiday house in Rizokarpaso. Turkey continues to illegally occupy the north of Cyprus, and my family hope for a free and united island someday.
Neos Kosmos