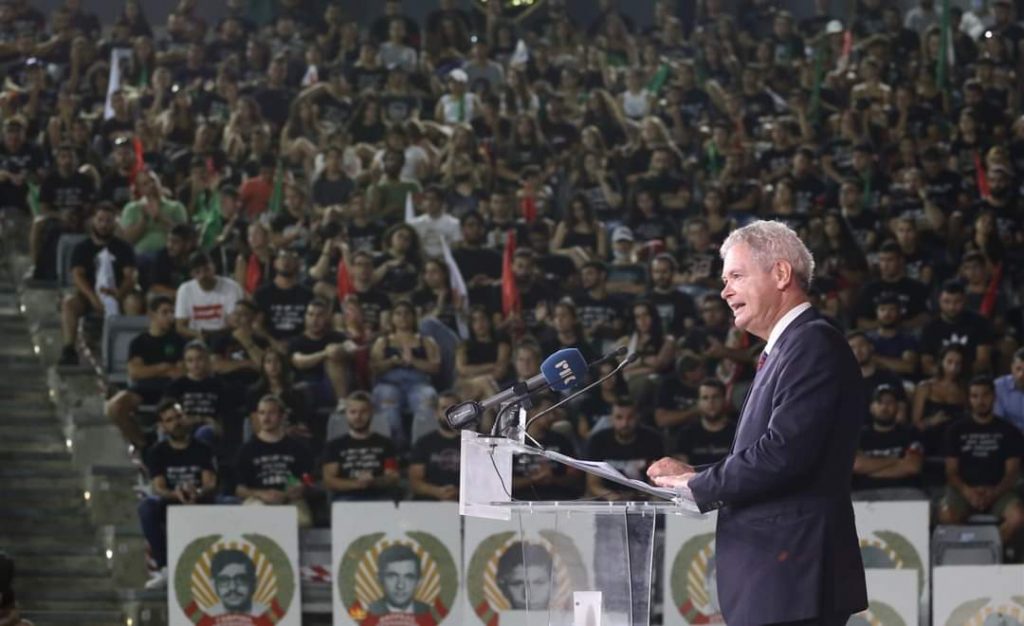 I was recently reading the story of a mother who lost her 19-year-old son in the invasion. A fellow soldier told her that in those days of the invasion her son was killed and buried in a mass grave outside Nicosia. And that she herself set about going on the spot and digging to find her son’s body and bury it with the proper honors. “I didn’t want to hurt his body anymore, so I dug with my hands,” she said.

These are scenes from an ancient tragedy. A tragedy that has been going on for almost fifty years. This is what our homeland is living. This is what the people of Cyprus are going through. Life may have gone on after 1974, generations may have changed, people may have moved on but we see the tragedy. We are living it. The wound has not healed. Graves are still being opened, bones are still being exhumed. The nightmare is not over. The barbed wire of division is still there.

The graves with flags in every corner of Cyprus, the monuments, dusty slabs in cemeteries, the bones of heroes spread out in the anthropological laboratory. Families are still grieving. Each grave has its own story. Every black-clad mother is a life cut in half.

Almost half a century later, the elders remember, the adults are often silent, but the children ask questions. The greatest duty we, the generation that lived 1974, have is to tell them the truth. For only if the truth takes root in the consciousness of the young generation and strengthen their resolve will Cyprus be saved.

We live in a country that has not yet deserved to live the days it deserves. Bloody decades, shackled independence, betrayal, invasion and occupation. And our great flaw: resorting to the reading of history to suit everyone. Blame the foreigners. But if there was no treason from within, the foreigners would not have succeeded in their plans. Or it’s everyone’s fault and by engaging in general aphorisms we create new stereotypes.

But not everyone took up arms to attack the Presidency and dissolve democracy. Some resisted, some gave their lives and some sided with the right side of history and were vindicated and justified in their passage through life. They deserve remembrance, honor and laurel wreaths. If the Republic of Cyprus remained standing after the treacherous blow of 15 July 1974, it owes it to them.

What were all these people made of? What a leap forward they made at that fateful moment, what a transition, leaving everything only to fight for what they believed in. The answer is simple. They chose right over wrong. They chose legality over terrorism and treason. They chose democracy over fascism. Every small and great struggle of our people spoke in them for all that was not then given, that was won with blood and struggle, and spoke of the virtue and the legacy of their values.

That is why we carry our double heavy debt to this day. To speak to the young generation about the value of democracy, about the heavy toll our country paid to defend itself, about the dramatic consequences of the attack on it. To establish this supreme ideal firmly in practice, with historical truth strengthening our struggle so that it becomes an experience in big and small decisions in political and social life.

To make the whole of society aware of the heavy price paid for big empty talk, nationalism, intolerance and hollow rhetoric. To talk about history, about the past, so that we can pave the way for the future, the future of a reunited Cyprus.

The modern history of Cyprus is buried in its cemeteries. Therefore, at a time when government officials do not feel the need to honor as they should those who fell defending democracy, who give the impression that they are forced to attend the events condemning the coup, at a time when others are trying to portray history in a different light, so that everyone, victims and perpetrators, can make themselves comfortable in it, we must bring it to the fore and reveal it. We must not let forgetfulness and silence spread their veils.

We are late, but we still have time to say things by their true name.

Cyprus was betrayed. Democracy was the target of the Junta and EOKA B. But it endured because it was defended by the many, the democrats, the true patriots.

In Cyprus, betrayal brought the crime of the Turkish invasion and the continuing occupation and division of our country. But there is still the hope for vindication. Because it is kept alive by Greek Cypriots and Turkish Cypriots alike who raise high together the idea of a common homeland, the Cypriot flag, who speak of what unites them.

Every 15th July the sirens sound to remind us of what happened and what we must not let happen again. They denounce forgetfulness, they break the silence, reminding everyone that we owe our children the truth and the future. The victory and consolidation of democracy, the vindication of reunification.

The history of Cyprus teaches us. Fanaticism, dogmatism, the cultivation of illusions and vanity, pre-election considerations, backtracking, empty slogans and grandstanding. We face a powerful opponent, committed to its goal, partition. Time is running out. Our country can take no more. Our people cannot withstand any more false promises, cannot stand to see the interests of the country being sacrificed to the interests of factional expediency or personal ambitions.

The closer we get to the Presidential Elections, the more the debate on the Cyprus problem will also become heated. Perhaps others will not dare to name it, seeking to deceive citizens again. They may not dare say whether they want a solution of the Cyprus problem, what kind of solution they want, how they envision Cyprus, tomorrow, how we will get there, how and how quickly, with the room constantly narrowing.

We dare to say, because we know what we want, we know how to achieve it. A solution of a bizonal bicommunal federation. A prosperous Cyprus, a homeland for all its people, Greek Cypriots, Turkish Cypriots, Maronites, Armenians and Latins. This is our goal. A homeland free from occupation where its people can build their lives on the solid foundations of peace and progress.

I stand on this podium with emotion.

I see the photos of the heroes of the Left, the heroes of our people, and I feel a heavy sacred duty to bow my knee and honor their sacrifice, to join my voice with all of you to fight together so that the blood they shed for our country is not wasted.

I see the youth, fighting, enthusiastic, determined to live in another Cyprus. And I feel that we owe them an apology for yesterday and for today and a consistent commitment to our efforts to build the future.

With you, together, all together to build Cyprus again! 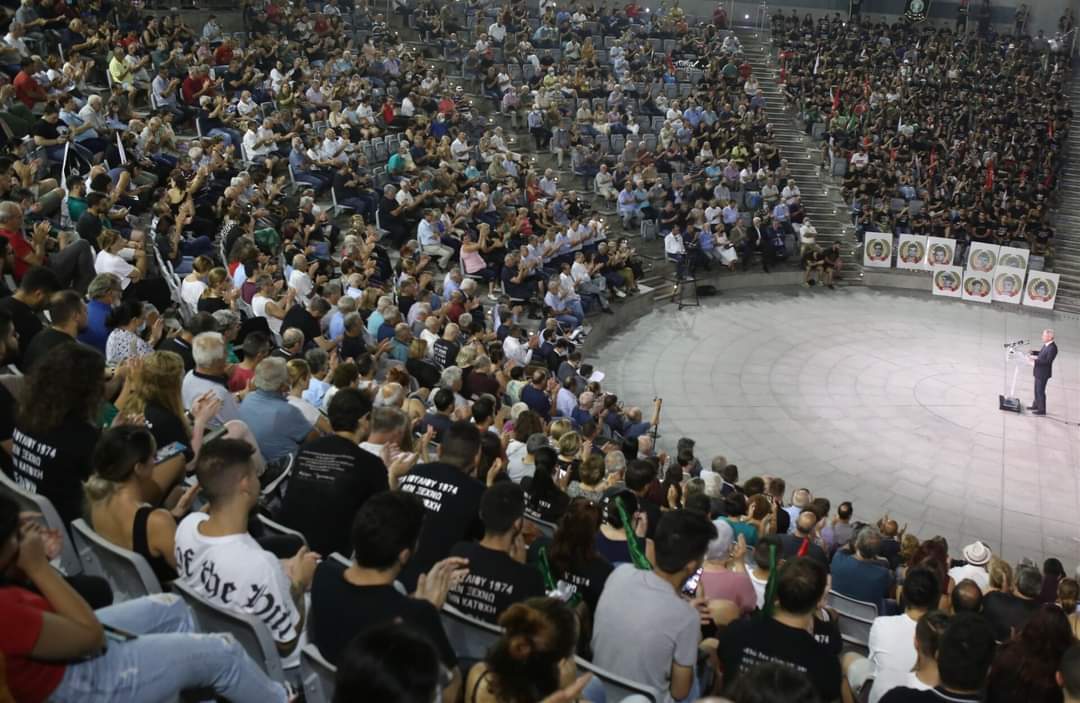