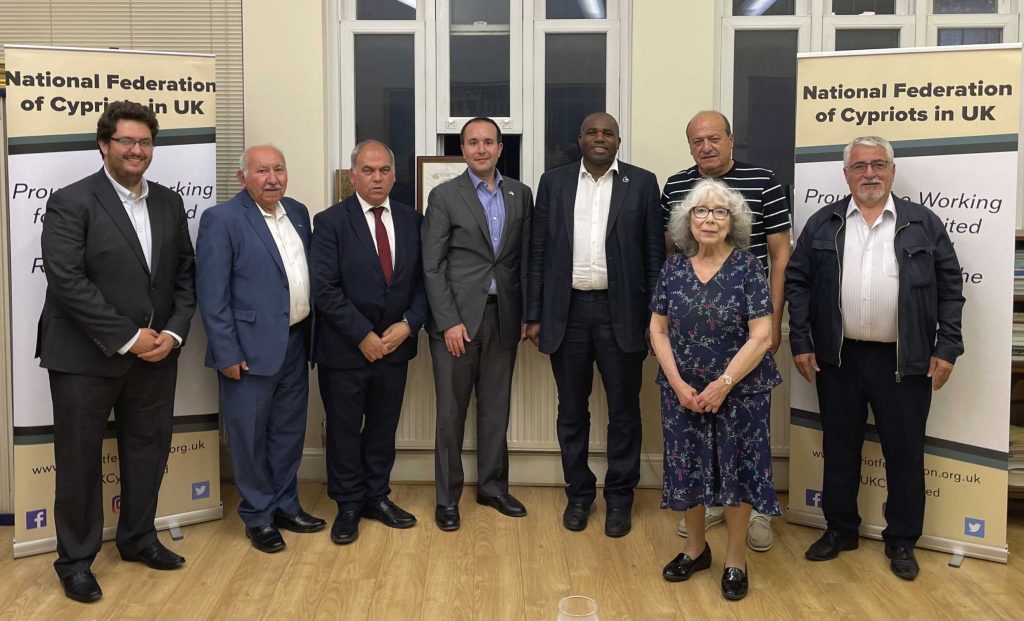 On Thursday 8 July 2022, a delegation from the National Federation of Cypriots in the UK, hosted a working dinner with the Shadow Foreign Secretary, Mr David Lammy MP and the Shadow Minister for the Middle East & North Africa, Mr Bambos Charalambous MP.
During a working dinner, they discussed the political situation in the Eastern Mediterranean, the Cyprus issue and the recent political developments in the UK. The Federation Officers provided an update to Mr Lammy and Mr Charalambous on key topics including: the continuous threats by Turkey in Cyprus’ Exclusive Economic Zone (EEZ); the illegal opening of sections of the fenced off area of Varosi; the latest proposals by President Anastasiades for Confidence Building Measures; the reactions of the Turkish Cypriot community to Turkey’s increased control over the occupied territories; the positive role that the UK can play in achieving a solution that reunifies Cyprus and; the importance of the United Nations Security Council resolutions on Cyprus.
They also spoke about the work that the National Federation of Cypriots in the UK does representing UK Cypriots, advocating for a free, united Cyprus and addressing longstanding problems faced by Cypriot refugees who fled the illegal Turkish invasion in 1974, as well as some of the recent matters of concern to the 300,000 UK Cypriots, such as the problems created for our diaspora by Brexit and the pandemic including unemployment, especially among young people.
Mr Lammy spoke fondly about his positive interactions with the UK Cypriot community whilst growing up, but also since his election as the Member of Parliament for Tottenham, where many members of our community live.
The Shadow Foreign Secretary and the Shadow Minister reiterated the Labour Party’s commitment to an ending the occupation and reuniting Cyprus, as a bizonal, bicommunal federation in line with UN Security Council Resolutions. In addition, they reiterated their support for the right of the Republic of Cyprus to exploit hydrocarbons in its Exclusive Economic Zone (EEZ) and condemned the illegal opening of the fenced of town of Varosi which is in violation of Security Council resolutions.
The Federation was represented by its President, Christos Karaolis, its Vice Presidents Bambos Charalambous and Michalis Ellinas, its Executive Secretary Andreas Karaolis and Members of the Executive Committee Susie Constantinides and Adrian Patsalos.