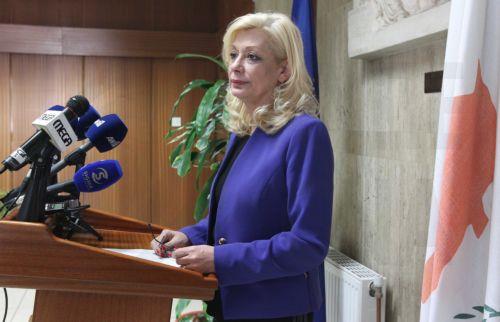 The remains of Labour Minister Zeta Emilianidou, who died, in a hospital in Athens, on Monday, after suffering a cerebral aneurysm last month, will be transported on Wednesday afternoon to Cyprus.

On Tuesday, Health Minister Michael Hadjipantela, travelled to the Greek capital to arrange the details for the transfer. He was accompanied by the Ambassador of Cyprus to Greece, Kyriakos Kenevezos, and other officials.

A statement from the Presidency of the Republic said that President Nicos Anastasiades communicated on Tuesday morning with members of Zeta Emilianidou’s family, conveying his deep sorrow for her loss.

The President of the Republic also decided to suspend all his public activities until the day of the funeral.

At the Cabinet meeting on Wednesday, decisions will be taken on the honours the state will pay to the deceased, it was added.

The President of the Republic has instructed that the flags of the Republic of Cyprus at the Presidential Palace and Ministries will fly at half-mast from today. Details concerning the funeral and other relevant arrangements will be announced in due course.