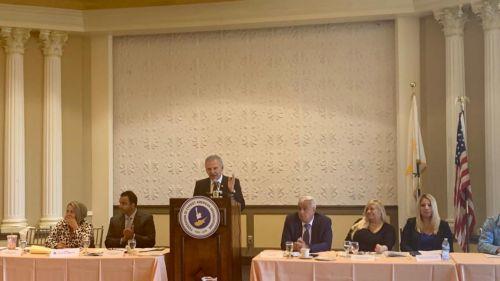 Turkish demand for a two-state solution in Cyprus impossible, Presidential Commissioners says
“Achieving a solution that will permanently rid Cyprus of Turkish occupation and reunite Cyprus is what we should all work for” said Presidential Commissioner Fotis Fotiou, while addressing the annual conference of the Federation of Cypriot American Organizations, held in New York.

He spoke of “a solution without foreign guarantees and guarantee rights” that will transform Cyprus into a “normal state that enjoys all the rights deriving from the international law.”

Fotiou, who represented the Cypriot government at the conference, referred to the efforts made to hold talks as Turkey pursues an uncompromising policy with the main goal of enforcing its control throughout the island.

“Whenever there is a question of resuming the negotiation process, Turkey and the puppet regime in the occupied territories demand that we recognize the so-called sovereign equality of the Turkish Cypriots and accept the solution of the two separate parts, that not only deviate from the UN parameters and the mandate of the General Secretary, but fall into the last category of ambitions to achieve the impossible, as President Anastasiades characteristically said ” Fotiou added.

The Commissioner also referred to Turkey’s mounting aggressive demands and said that Ankara is accusing Greece of an expansionist policy in the Aegean, trying to face international criticism against its own self-evident aspirations for a “Blue Homeland”.

In addition, he said, it threatens to invade Syrian territory beyond its expansionist ambitions for Libya and Iraq.

“In the context of our side’s efforts to find a way out of the impasse of the negative positions and approaches of the Turkish side, with this letter and the proposals of President Anastasiades, another attempt was made to repeat the negotiations in the interest of both communities, for peace and stability in the region” the Presidential Commissioner noted.

Fotiou referred to a teleconference, on May 9, attended by US Secretary of State Anthony Blinken, Foreign Minister of the Republic of Cyprus Ioannis Kasoulidis, Greek Foreign Minister Nikos Dendias and Israeli Foreign Minister Yair Lapid, where all four sides committed to promoting peace, stability and prosperity in the Eastern Mediterranean, as he pointed out. At the same time, he went on, they decided to intensify their cooperation in the fields of energy, economy, climate change, natural disasters and the fight against terrorism.

During his speech at the Conference, Fotiou made special reference to the issue of missing persons. “The families of the missing Cypriots continue, all these years, to carry on their shoulders the heavy cross of martyrdom for the disappearance of their loved ones” he said.

Unfortunately, he added “we are still facing the unacceptable behavior of Turkey, which not only does not cooperate as much as it should to determine the fate of all the missing, but, provocatively and unacceptably, continues to raise obstacles, essentially aiming at concealing its great guilt.

Fotiou asked the International Community and the United Nations, the European Union, the United States and other countries, even after 48 years, to raise awareness and press Turkey to work together to resolve a humanitarian issue.

The Presidential Commissioner also addressed issues concerning Hellenism abroad, the prosperity of overseas communities and the promotion of their rights, as well as promoting the case for Cyprus.

As he underlined, the cooperation with the Greek government is valuable and Cypriot and Greek overseas organizations promote together actions. “Top priority of our strategy is the encouragement and active participation of expatriate youth which is the future of our diaspora. By investing in the new generation we are investing in the future of our diaspora. It is in this context that with concrete and innovative actions we try to keep young people closer, so that they know their culture, history, language, traditions and their roots” he concluded.