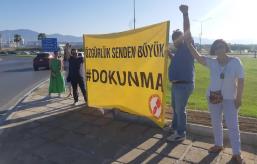 Anayasa shared his view on the new “trial” in the Turkish occupied areas of Cyprus, on the occasion of a humorous article he wrote. The “police” considered that Anayasa’s controversial article is “offensive” and thus resorted to “justice”, denouncing the Turkish Cypriot intellectual and the opposition news website “Ozgur Gazette” (Free Newspaper). Both Anayasa and the website are well known in the Turkish Cypriot community for their support in the vision of Cyprus reunification and the bicommunal, bizonal federal solution.

“The text in question does not bear any evidence that could lead to a trial,” Anayasa noted adding that “the timing is important. Our trial was announced shortly after the visit of Turkish Foreign Minister Mevlut Cavusoglu and the mobilisation of Turkish Cypriot journalists in defence of freedom of expression”.

“We have entered a very dark period. Recent developments are not by accident,” Anayasa said, adding that “I have the impression that the campaign of silencing the Turkish Cypriot community is directed by a certain centre.”

It is no coincidence, he notes, “that a bill is currently being discussed, which includes social media and restricts freedom of expression. I believe that in the coming period pressures on Turkish Cypriots will intensify. This development may be related to the elections in Turkey.”