The state stands by all sports clubs without exception, President Anastasiades say 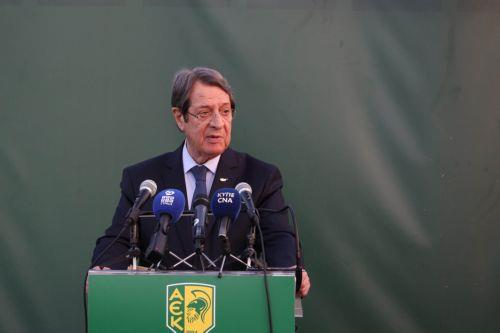 The State stands by AEK and all sports clubs without exception, Cyprus President Nicos Anastasiades said on Wednesday, adding that in accordance with financial capabilities and taking into account the critical times that the global economy is facing, it will stand on the side of Kition Sports Association.

In his address at the inauguration ceremony of the AEK Larnaca Sports Academy Centre “Nicolas Theodotou”, President Anastasiades congratulated the club’s management team for naming the Centre in honour of the club’s academy footballer and said that the decision “is a recognition not only of his talent as a footballer, but also of the ethics, kindness, consistency, patience and perseverance of young Nicolas. It is these characteristics that have allowed him to courageously fight any battle and become an example for anyone going through their own struggle.”

I have no doubt, he continued, that “the Sports Centre that we inaugurate today will reinforce AEK’s upward trend in recent years, one of the most remarkable teams playing in our league. An upward trend, which this year was accompanied by the participation, for the first time, in the qualifying round of the UEFA Champions League.”

At the same time, said President Anastasiades “I cannot ignore the equally successful course recorded over time by the basketball and football teams, as well as the distinguished presence in CFA championships of all ages” and congratulated AEK’s president and board members for the successful course of the sports departments.

Moreover, he praised the initiatives they undertake, which, he said, contribute more broadly to the multifaceted development of sport in the country. “The Sports Center that we inaugurate today, as well as the AEK Arena, which was a vision of the management, are comparable to the stadiums of top European clubs and are fully compatible with international operational standards and safety rules required by UEFA”, while in addition to AEK and our national teams, they serve the needs of other teams in the league, and abroad, thus promoting sports tourism, he added.

Having noted that “recognising the benefits that arise from the construction of the Sports Centre, the government stood by the implementation of this project”, President Anastasiades said that “in addition to its construction on a piece of land owned by the Republic of Cyprus, AEK received funding from both the Cyprus Sports Organisation and the Deputy Ministry of Tourism for a total amount of 590 thousand euros”.

He also noted that the government also supported the effort to build AEK’s excellent privately owned stadium, a real jewel, with a contribution of 2 million euros. In addition, he said, “promoting our further plans and especially the club’s regarding the implementation of privately owned pitches, the piece of land adjacent to the Sports Centre has been leased through the Cyprus Sports Organisation.”

President Anastasiades also said in his address that the club is looking forward to financial support from the state for the completion of the project and assured that “in accordance with financial capabilities and especially taking into account the critical times that the global economy is facing, we will be on your side.”

He also said there will be consultation

with the club and the Minister of Finance “to see the how the state can contribute to this noble effort that AEK is making” and added that “as we have already proven in the past, we are now on your side, as well as on the side of all clubs without exception.”

He also mentioned that there are many footballers, coming from the academies of AEK Larnaca, who, apart from their distinguished career in various teams, “shine with their ethos, but also their participation in our national teams” and expressed the conviction that the Sports Centre, as a new motivation and inspiration for even more young people to get involved in football, will be the new page of history for the team of Larnaca.

The President of the Republic also congratulated the athletes and the fans of AEK, who, he said, by remaining far from fanaticism, honour the history and reputation of their team with their presence in the sports arenas and wished AEK “good luck ahead of the UEFA Champions League competition.”

The ceremony was attended, among others, by Minister of Health Michael Hadjipantela, Deputy Minister to the President Kyriacos Koushos, Presidential Commissioner Photis Photiou, Mayor of Larnaca Andreas Vyras and MPs.