The only viable solution in Cyprus is the one which upholds the UN principles, Irish House Speaker says 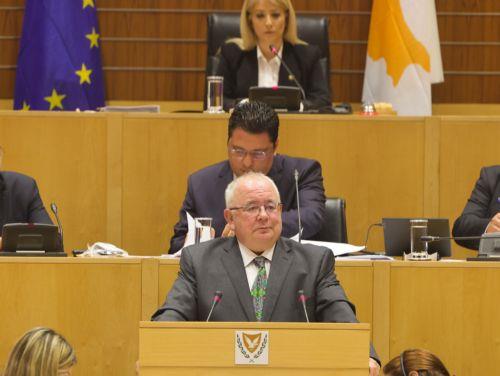 Addressing the Cyprus Parliament, the Irish official, who earlier met with the Irish contingent deployed with the UN Peacekeeping Force in Cyprus, (UNFICYP) said that since 1964, over 10,000 Irish troops and police officers have served with UNFICYP, and continue to do so today.

“Our support for UNFICYP, both politically and through our deployment of peacekeepers, is the clearest possible signal of our desire and support for a political solution in Cyprus,” he pointed out.

He noted that through Ireland’s membership of the Security Council, “we have repeatedly underlined our commitment to the unification of Cyprus, based on the UN framework and the principles of a bi-communal, bi-zonal federation with political equality and for an honourable, balanced and durable settlement protecting and safeguarding the basic rights of all Cypriots”.

“As the mandate for the UN mission comes up for renewal in a few weeks, Ireland will once again re-commit itself to those principles,” he stressed.

The President of the Irish House said that “I want to make clear that this is the only valid way forward and that threats to that framework or violations of the Security Council resolutions, including unilateral actions to change the status of any part of Varosha from demilitarised to civilian can be regarded as a clear violation of UN Security Council Resolutions. The only viable solution is one which upholds the principles established by the United Nations”

Earlier in the day, the Irish official visited the Committee on Missing Persons. He said that the work of the members of the Committee and their staff are a vital contribution to addressing the pain of past suffering. “Overcoming the legacy of past violence and present mistrust requires a leadership with vision and courage. Ireland hopes that the renewed efforts to open dialogue will overcome the legacy of mistrust and that progress towards a solution between both communities can be made,” he said.

He also welcomed the new initiative between Ireland and the Committee on Missing Persons, saying that the Commissioner of the Garda Siochana, Ireland’s national police service, approved a new training programme for the investigative staff of the Committee, which will be provided by Irish police officers with the support of the Irish Garda College, the national police training centre.

“We are glad to strengthen the Committee’s capacity to pursue investigations, which should assist in healing the deep wounds among Cypriots of both communities” he said, noting that Irish families have also suffered the enduring pain of conflict.

Referring to the war in Ukraine, he said that Ireland and Cyprus, along with many other countries would be weakened if international law fails in Ukraine, or if there is a failure of accountability. “Our security and the safety of our people are at stake in the outcome of this war” he said, adding that “for small countries like Ireland and Cyprus, the rule of international law is there to protect us and we cannot allow it to fail”.

As regards Brexit he thanked Cyprus for its solidarity in protecting the Good Friday Agreement, “an agreement which ended a quarter century of conflict is too valuable to risk through unilateral actions”.

At the beginning of his speech, he addressed the Parliament in Greek saying “I am honoured to represent my country’s parliament today and to promote further friendship between Cyprus and Ireland”.

Concluding, he expressed the deepest sympathy of the members of the Irish delegation on the untimely death of “a great Cypriot Leader, Your Minister for Labour Ms Zeta Emilianidou”.

Welcoming the Irish official, President of the Cyprus Parliament Annita Demetriou expressed Cyprus’ sincere gratitude for the firm position of principles of Ireland as regards the Cyprus problem, especially in the UN Security Council, where Ireland is a non-permanent member for the years 2021-2022, as well as in the EU.

We are also deeply grateful, she noted, for Ireland’s significant contribution to the UN Peacekeeping Force and paid tribute to the Irish who served from 1964 to 2005, as well as those currently serving in the UNFICYP Police Department.

In addition, she thanked Dublin for its significant contribution to the work of the Committee on Missing Persons.

Referring to the Cyprus issue, she said that Nicosia remains committed to resuming talks within the parameters of the UN, but noted that the Turkish side insists on a “two-state” solution, “separate sovereignty” and “equal international status” as prerequisites to begin negotiations.

“Such claims will never be accepted and have been explicitly rejected by the international community,” she stressed.

Demetriou pointed out that Turkey seeks the creation of new fait accompli by developing “pirate raids in the Exclusive Economic Zone of the Republic of Cyprus, proceeding to the gradual opening of the fenced off area of Famagusta for economic exploitation in violation of the UN Security Council Resolutions 550 and 789 and by further militarising the occupied territories with modern military equipment, radars and drones,” she stressed.

Referring to the invasion of Ukraine, she called upon Nicosia’s European partners and the international community to show the same sensitivity and determination in relation to Cyprus saying “we are confident that we can count on Ireland’s support as a friendly country equally loyal to positions of principle”.

At the beginning of the session, a minute’s silence was observed in honor of Zeta Emilianidou, who passed away this week in the age of 68