Stefanos Tsitsipas on a high 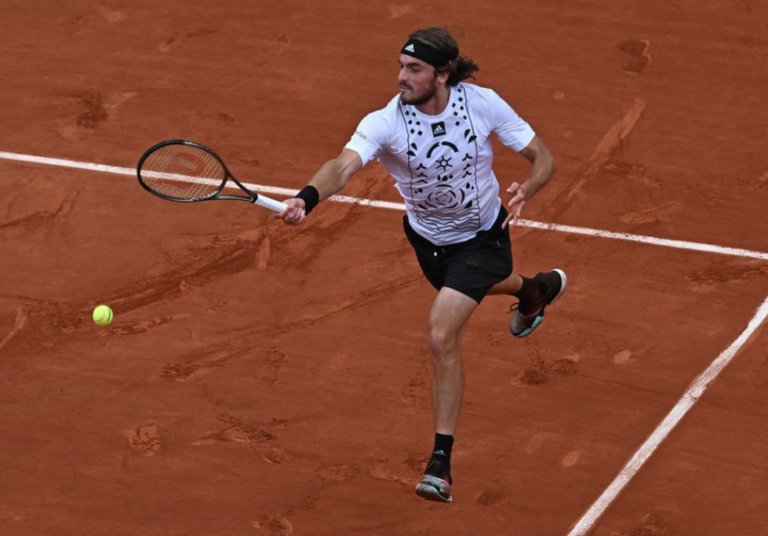 Grass court tennis can be something of a brainteaser for many players, and Stefanos Tsitsipas was certainly up for a thoughtful chat about its mysteries on the eve of The Championships 2022.
Wimbledon has not been his happiest hunting ground to date – he has progressed past the first round in just one of his four visits, back in 2018 when John Isner saw him off in the last 16.
This time around, the Greek arrives fresh from lifting the trophy in Mallorca, with earlier defeats on the Stuttgart and Halle grass to Andy Murray and Nick Kyrgios respectively both filed away in the cabinet marked ‘learning’.
“What I wanted to have this year was to get as many matches on grass as possible before Wimbledon, and I’ve done that,” Tsitsipas said.

STEFANOS TSITSIPAS
“People kind of doubted that I can play on grass, I think it’s fair to say.
“I never doubted myself. I said – I insisted, in fact – that I can play on this surface, and it remains one of my favourite surfaces.
“I was pretty confident about it.
“I guess I proved myself [in Mallorca] that it’s not a surface that I don’t like. I like playing on grass, probably more than on clay.”
It would be a shock indeed if this year’s No.4 seed once again failed to clear the first hurdle here.
His opening opponent is the 28-year-old Swiss qualifier Alexander Ritschard – “Ritschi” – a freshman to any Grand Slam main draw, and at a new career ranking of No.188 as of Monday.

STEFANOS TSITSIPAS: PRE-CHAMPIONSHIPS PRESS CONFERENCE
Last year Tsitsipas was bundled out on day one by Frances Tiafoe, but BBC lead commentator Andrew Castle thinks there are very good reasons for that.
“He took a long time to recover last year from being two sets up on Novak Djokovic in the Roland-Garros final, and losing,” says Castle.
“He lost in Wimbledon’s first round right after that with a very lame performance.
“But I think he’s one to watch this year.
“He does take very big swings for a grass court, but he volleys well and closes naturally on the net.
“If he reaches the second week, he’s not going to look around and feel scared of anybody.”
Tsitsipas certainly agrees with that take on the events of a year ago.
JUST GET PAST THE FIRST ROUND AND SEE WHERE THAT LEADS AFTER
STEFANOS TSITSIPAS
“Last year was difficult for me,” he said.
“I didn’t play a single match before Wimbledon on grass. I was trying to play on grass like I did on clay, which was a huge mistake. Technique-wise, tactic-wise, it all fell apart.
“For me, it’s a new start here at Wimbledon.
“I love playing on these courts. I love the serve-and-volley game, coming in as much as I can, slicing, attacking.
“This feels right. Had a very close match against Andy in Stuttgart. Same with Nick. I was getting there, I think.
“I see myself a little bit different now in terms of how I perceive this surface in particular. The thing that I hope for this year is just get past the first round and see where that leads after.”
So, does Tsitsipas agree with Andrew Castle? Is he indeed a potential contender for the title here?
“I’ll probably have to get close to what Matteo Berrettini did last year then see if I am able to be a potential future Wimbledon champion,” Tsitsipas mused.
“I really want to. I absolutely think that I can get there one day. I think my tennis is suited for that.
“I’m a person that likes to work hard, so I see no reason not to get there because I’m capable with my tennis, I’m capable with my mind, I’m capable with my abilities as a tennis player.
“The last two appearances I had on Wimbledon were not great. I just want to see something different. Let’s just start from that.
“Maybe week two we can re-evaluate things, recalibrate the focus. I got to start small first, you know?”