President Anastasiades receives Earl and Countess of Wessex in Cyprus 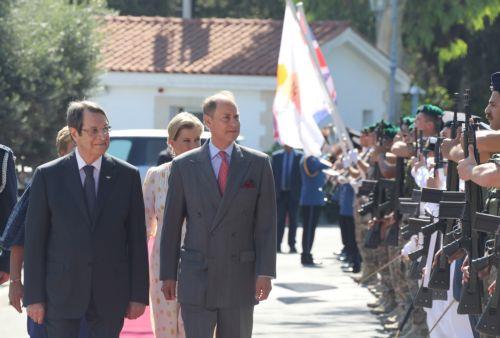 Cyprus President Nicos Anastasiades received on Tuesday at the Presidential Palace the Earl and Countess of Wessex.

The President and his spouse Andri welcomed Prince Edward and Countess Sophie during an official ceremony which took place in the morning, a presidency press release says. A military procession paid tribute, and the national anthems of Cyprus and the United Kingdom were played.

Then Earl of Wessex laid a wreath at the statue of Archbishop Makarios III, the first President of the Republic of Cyprus. President Anastasiades, his wife and the Earl and Countess of Wessex then had a meeting at his office.

Welcoming the Earl and the Countess President Anastasiades said that relations between the two countries are continuously being strengthened and further developed, noting that their meeting today will provide an opportunity to review bilateral ties.

He added that the bilateral relationship is based on strong ties, emphasizing that hundreds of thousands of Cypriots live permanently in the United Kingdom, while thousands of Britons choose Cyprus after their retirement. He also said that Cyprus is a major tourist destination for British citizens.

The President noted that there is a will to further strengthen cooperation between the two countries in all areas. He also congratulated the royal couple on their 23rd wedding anniversary.

The Earl and the Countess attended on Monday evening an event organized by the UK High Commissioner on the occasion of the Queen’s Birthday Party and Platinum Jubilee, in the presence of President Anastasiades.

While in Cyprus, they are to also meet British peacekeepers serving at UNFICYP and members of the British Forces serving in the British Bases.