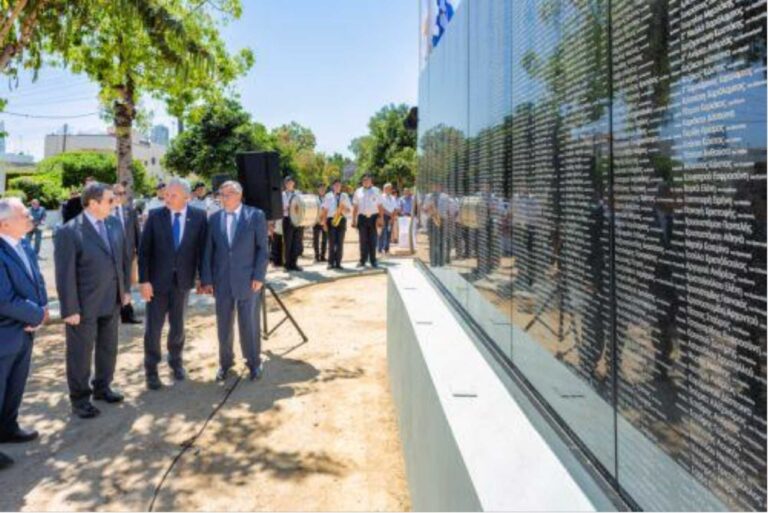 President of the Republic of Cyprus, Nicos Anastasiades criticised countries on Saturday that ignore Turkey’s provocative actions and continue to pamper her for the sake of their interests.
Speaking in Limassol during the unveiling of a monument for those who fell and are still unaccounted for since the Turkish invasion, President Anastasiades said that despite the investigation of a large number of missing persons cases, the fate of 775 Greek Cypriots and Greeks remains unclear.
The monument was set up at the Missing Persons Park of Limassol Municipality, in cooperation with the Presidency Commissioner and the Pancyprian Organisation of Relatives of Undeclared Prisoners and Missing Persons.
The monument, said President Anastasiades, serves as a constant reminder of the responsibility and obligation we have as a state, people and nation, to investigate the fate of all the missing persons.
“Unfortunately despite the investigation of a large number of cases and what our side has done, the fate of 775 Greek Cypriots and Greeks missing remains unclear,” he said.
This is the result of the usual and inhuman tactic of the occupation force which continues to refuse granting information from its archives about the fate of the missing, despite the assurances given to the UN that 30 locations would be indicated to look for missing persons.
Assuring that the state will continue supporting efforts to promote the issue as well as the work of the Committee on Missing Persons (CMP), the President appealed to anyone who has any information that would help in locating even one missing person, not to hesitate to come forward with complete anonymity.
The president said that our side demands that the UN, the EU and the international community put Turkey before its responsibilities.
They are calling on Russia to end its invasion of Ukraine and to withdraw from the country, citing war crimes, when Turkey committed the same in Cyprus, the President added.
Noting Cyprus’ sympathy towards the people of Ukraine and those suffering, the President said he believes the current situation will be a wakeup call for justice that does not discriminate between sovereign and non-sovereign nations.
“Cyprus is just as sovereign state as Ukraine is and we were barbarically invaded by a stronger country on the same pretext,” the President remarked.
It is high time, President Anastasiades said, to put forward to the EU, the UNSG and every international fora that now is the time to understand that international law should prevail and we should all respect it.
Our side, he pledged, will continue efforts to achieve a fair solution that will safeguard human rights and give the right to the relatives of the missing to find out the fate of their loved ones.
President Anastasiades said it is sad that countries watch the provocative actions in the Aegean, Cyprus, Syria, Libya, Iraq and refuse to implement sanctions. They also witness Turkey blackmailing over Finland and Sweden’s NATO aspirations and yet “Turkey continues to be the pampered child of some countries for the sake of their own interests.” These are the realities,” he added, noting that “for these realities we are have to continue the struggle.”